J. A. Felker (and Another Puzzle Identified)

Back in January, Jim Horne and Jeff Chen of XWord Info received an email, which Jim subsequently copied me on, from Janet Felker, the daughter of pre-Shortzian constructor J. A. Felker (1911–91).  Janet wrote that her mother, whose full name was Josephine Ann, had had crossword puzzles published in The New York Times (as well as Bantam Books and Pocket Books) between 1971 and 1977.  Will Weng had published 11 of her diagramless puzzles and four of her regular Sunday puzzles (as well as what turned out to be a previously anonymous Friday puzzle!).  Janet noted that she had files of her mother's submissions to the Times that were accepted, as well as of some submissions that had been rejected.  "Perhaps of most interest to crossword puzzle enthusiasts," she wrote, "are the original memo notes from Will Weng regarding some of the puzzles, including his rationale for those he rejected."

I wrote to Janet expressing interest in these and other items, and she soon sent along the above photo of her mother, taken in 1983; a 1991 Miami Herald obituary, "Josephine Felker, N.Y. Times crossword puzzle composer"; a 1980 note from Will Weng (see below) about her mother's name; and a copy of the original clipping of her mother's August 27, 1971, daily puzzle, along with the original clues (or "definitions," as they were called then), some of which Weng subsequently edited for publication.  I've posted the obituary and clipping plus clues on Scribd; to see them, click on the links above.

Janet also mentioned that she remembered why her mother had used just her initials when submitting puzzles:

I have a vague memory of my mother explaining that she intentionally used "J.A." as she began submitting crossword puzzles to the NYT because she felt that her puzzles might receive more equitable treatment than if she were to submit under "Josephine."  It's interesting to me that in his note, Will Weng admits that he assumed that J.A. was a male and was "astonished" to learn that she was a female. 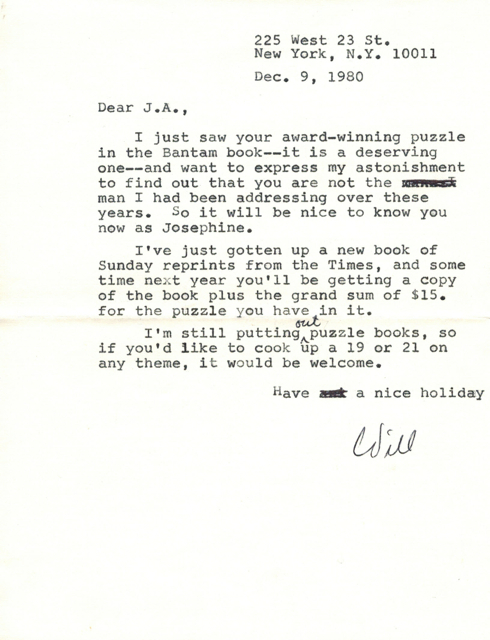 Janet also reported that her mother had two large puzzles published by Bantam Books, for which she won cash awards for fourth prize and fifth prize in The Bantam Great Master's Crossword Puzzle Hunt, which was where Janet thought Weng had discovered that "J. A." stood for "Josephine."  She had documents for those two puzzles, along with a folder of six rejected large puzzles, each of which included her mother's clues, as well as a blank and handwritten completed grid.  Several puzzles had Will Weng's memos attached, with an explanation of why he was returning them.

In addition to her regular crosswords, J. A. Felker also had 12 diagramless puzzles published in the Times between 1971 and 1977; Janet sent the note below from Will Weng—addressed to "Mr. Felker"—accepting J. A.'s first diagramless puzzle, which was published on August 29, 1971. 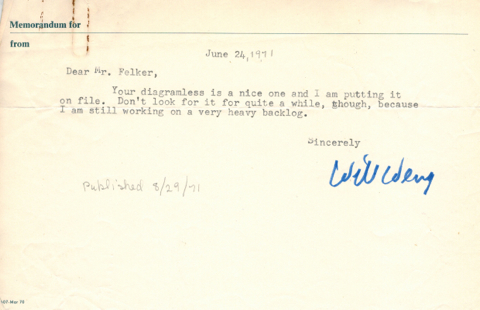 I don't know if you are interested in more background on my mother, but she was quite educated (for a woman of her time) and talented in other ways as well.  She earned a bachelor's of art from Carnegie Tech and a master's of art from Penn State College in 1936.  She was quite artistic and continued to sketch and paint through much of my childhood. She was also an accomplished seamstress (her master's thesis was on the history of women's dress) and sewed many of her own and her children's clothes, often designing her own patterns.  A few of the outfits (sewed with fabric from Europe) are now part of the collection for students to study in the Fashion Institute of Salt Lake Community College.  As the Miami Herald article indicates, mom also learned several languages as a result of living abroad (Brazil, Puerto Rico, Cuba, Mexico, Italy, Belgium, Japan, Hong Kong)  due to my father's work, between 1946 and 1972.  She was an avid reader and loved not only doing crossword puzzles but also jigsaw puzzles.

Thanks so much again for writing and telling us about your mother, Janet!  Thanks to this information, we were able to identify one more previously anonymous daily puzzle and to provide an illuminating look not only into one of the rare female constructors of the pre-Shortz era but also into the mind of editor Will Weng!

Shortly after my recent post containing an olio of Todd Gross pre-Shortzian constructor research appeared, I received an email from constructor Jim Modney, who wrote that there had been an obituary of Warren W. Reich in his local paper, which you can read here and which also contained the above photo.  Jim noted:

I met Warren once in the early 1980’s, after Eugene Maleska noticed that Warren and I were both in the Albany, NY area.  By that time I had begun my 30 year “hibernation” from crossword constructing, so Warren and I never crossed paths again.

Jim's email was followed by one in early January from crossword historian Todd Gross, who also sent a link to the Times Union obituary and mentioned that he'd received an email from Warren Reich's daughter, who'd said some nice things about her father.  Thanks so much again for letting me know about this, Jim and Todd!

A few days later, Todd wrote that another pre-Shortzian constructor, James E. Hinish Jr., had died and sent a link to an obituary, which had the above photo and which you can read here.  James published at least 16 puzzles in the pre-Shortz era.