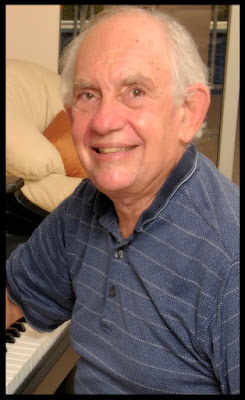 Another crossword great passed away a few days ago, and his death, though not unexpected, came as a particularly heavy blow.  I had been in touch with him recently about a puzzle he'd submitted to The Puzzle Society Crossword, and when I accepted it, I realized it might end up being his last.  I bumped it up to the soonest date I could, scheduling it for August 7—but that turned out to be too late.

Mel's life and importance to the crossword community has been eulogized elsewhere by others who knew him better than I, most notably Will Shortz.  But I will always think of him as one of the most generous constructors I had the pleasure of interacting with, albeit at a distance, in creating this blog.  He responded at length to the many questions I, a high school sophomore, asked via email about his cruciverbal life; his answers became the 2013 interview that can be read here.  A 2010 L.A. Times Crossword Corner interview by C.C. Burnikel appears here, and a 1994 profile by Alex Vaughn in Crossw_rd Magazine is available on the pspuzzles Scribd site here.

Author of the classic Random House Puzzlemaker's Handbook and former editor of The Crosswords Club, Mel published at least 24 pre-Shortzian puzzles in The New York Times and 14 in the Shortz era.  As editor of the former OCRossword, I published two puzzles by Mel in The Orange County Register.  One was what he called a Dilemma Crossword.  The grid had bars instead of black squares, and it was split into two identically structured 8x15 halves.  Each clue was actually two different clues separated by a slash.  The catch was that the solver had to figure out which answer was to be entered into which half, since the order of the clues was scrambled!  Mel needed to have one entry joining the two halves, and he aptly chose TWO SIDES OF A COIN.  Easily one of the most memorable puzzles I ran in the Register.

Mel's creativity and originality were surpassed only by his character.  Earlier this year, I had approved what would have been the second of his ideas for The Puzzle Society Crossword.  He sent along an initial grid, complete with clues, and I responded by asking him to make a handful of changes.  In his usual positive, cheerful manner, Mel said he'd get to work on a revision.  A few days later, he told me he'd discovered a New York Times puzzle with a similar theme that we'd both overlooked.  Mel didn't want to put me in a pickle, so he dropped the idea altogether, no questions asked.  Considering how much work he'd put into that puzzle, his decision was truly admirable.

The August 7 Puzzle Society Crossword will be the last Mel Rosen puzzle I'll have the honor of publishing.  As per usual with Mel's puzzles, the theme is exceptionally clever, so be sure to mark your calendar!  Thanks so much again, Mel—rest in peace.
Posted by David Steinberg at 2:55 PM 2 comments:


Very sad news for the start of the new year:  Another crossword legend, Maura Jacobson, recently passed away.  I was on vacation when I first learned of the news on Facebook.  Although I never met Maura, I remember signing a large get well card for her at my first American Crossword Puzzle Tournament in 2012.  She wasn't able to attend that year, and I was disappointed that I wouldn't be able to meet her.  Later, I hoped to have a chance to talk to her about crosswords and perhaps interview her for this blog, but by then she was too ill.  For more on Maura, see Will Shortz's moving tribute, "Remembering Maura Jacobson," and this obituary in The Times, or click here and here and scroll down.  Rest in peace, Maura.
Posted by David Steinberg at 9:21 AM 7 comments: