Litzing During the Olympics, a Two-in-One Puzzle, and Love-ly Clues

We got off to a slightly slower start this week—it was a quiet weekend, and I'm guessing that litzers were either watching the Olympics or training for the crossword Olympics, the ACPT!  Early Monday morning, though, Lynn Feigenbaum sent in 7 puzzles, which were followed about an hour later by 7 from Barry Haldiman and then, 2 minutes later, by 7 from Alex Vratsanos!  Early Tuesday morning, Barry sent in 7 more puzzles, then that night, Alex sent another 7 puzzles, putting us at 15,100 on the litzing thermometer!  Wednesday morning, Lynn sent 7 more puzzles.  Then early Thursday morning, Barry sent 7 puzzles, which were followed late that night by a mega-batch of 42 puzzles from Mark Diehl!  And Friday morning, Lynn sent another 7 puzzles.  So even though this week got off to a wobbly start, the massive number of puzzles litzers sent in Monday through Friday has led me to give it a final score of 10!  Thanks so much again and great job, Team P.P.P.—we're now at 15,163 and well on our way to the gold medal achievement (the end of the litzing phase of this project)!

Today's featured puzzle, whose constructor is unknown, was originally published on October 8, 1966; edited by Margaret Farrar; and litzed by Martin Herbach.  This imaginative, forward-thinking crossword utilizes a trick I've never seen in any other puzzle, pre-Shortzian or Shortz era:  the use of two unrelated themes, one based on grid entries and the other contained within the clues!  The puzzle's main theme involves redefining music terms in wacky (and rather inconsistent) ways, much like the theme in last Friday's featured puzzle.  My favorites of the six symmetrically arranged music-related clue/entry pairs are "Percussion accessories of poultry." for DRUMSTICKS, "Behavior that sounds like band leader's error." for MISCONDUCT, and "Musical symbol, sounds like two-family residence." for DOUBLE FLAT!  BACK TO BACK ("Placement of two pianos.") falls flat for me, though, since the entry's connection to music seems rather dubious.  Nevertheless, I enjoyed the grid entry theme, and I especially appreciate how the theme entries are both interlocking and, to some degree, stacked.  The second, less obvious theme is completely bizarre:  20 of the 78 clues start with the words "Kind of"!  The first five clues and entries, for example, are "Kind of ware." (STEM), "Kind of soon." (EFT), "Kind of curiosity." (MORBID), "Kind of paper." (NOTE), and "Kind of 'easter." (NOR).  If incorporating a second theme isn't strange enough, the sixth clue, for URBANE, reads "Type of manner." (rather than the expected "Kind of manner.").  Although the second theme is kind of cool, it at the same time feels a bit out of place to me since it draws away from the musical focus of the rest of the puzzle.  Nevertheless, I always enjoy seeing a bit of creativity and variety in theme types and executions!  The nonthematic fill in this puzzle is also nice, on the whole—HOBNOB, STAND PAT, MONGOOSE, TOOLKIT, and FOOTAGE in particular give it a nice bit of sparkle.  On the flip side, the fill contains the six-letter partial FOR THE ("___ time being.") and feels a bit heavy on esoteric entries such as PHB ("Degree."), VAI ("Liberian people."), CUPELS ("Assaying receptacles."), MOBCAP ("Head covering, old style."), RHODORA ("Rose-flowered shrub."), and DESTRA ("___ mano [right hand]: Mus."), the latter of which could be considered semithematic.  The nonthematic clues are mostly standard for their time period, though the THRACE clue ("Carved up region of SE Europe") seemed somewhat noteworthy.  In all, this is a unique and fascinating pre-Shortzian puzzle!  The answer grid (with highlighted theme entries) can be seen below: 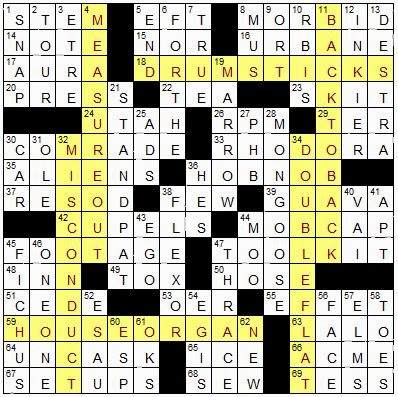 In honor of Valentine's Day, here's an ennead of love-ly 1964 clues from my ever-growing list of Clue of the Week candidates.  Most of the writers of these entertaining, thought-provoking, or downright ingenious clues are unknown.
My favorite of these clues is the one for CIGARETTE, which was contemporary at the time, given the Surgeon General's warning in January of 1964, and is still brilliantly misleading.  Here's a picture of a more literal interpretation of smoke under fire:

Posted by David Steinberg at 3:36 PM