The 1963 puzzles are now up on XWord Info!  Thanks again, Jim!  What's more, I expect to send off the 1962 puzzles over this long weekend, and all the proofreaders are now receiving puzzles from the 1950s!

Congratulations to Howard Barkin, who submitted the first correct answer to last week's Blast! challenge on Monday, February 9!  The clue, which was from the September 7, 1957, puzzle, was "Mass assault on the world's secrets."  The two-word answer:  GEOPHYSICAL YEAR.  Not as scary as you might have thought!

This week's Blast! challenge, which appears in the sidebar, is from 1963—so no peeking on XWord Info!

The very first issue of CROSSW ORD Magazine featured an overview of the New York Times crossword puzzle world—and its future—and included a profile of then-editor Eugene T. Maleska.  As usual, this insightful article was written by Helene Hovanec; it appeared in January/February 1991.  I've posted it here on Scribd.


Featured Puzzle
The 1963 puzzles are up and tomorrow is Valentine's Day, so what better way to celebrate both occasions than to feature the Valentine's Day puzzle from 1963?  The puzzle—a real beauty (brace yourself for more bad puns within!)—was constructed by Brice Metcalfe, edited by Margaret Farrar, litzed by Nancy Kavanaugh, and proofread by Mark Diehl.  (And now, thanks to Jim Horne, you can solve the puzzle on XWord Info before reading the write-up on this blog if you so choose.)  This lovely construction features five symmetrically interlocking theme entries containing the word HEART; all the theme entries are solidly in the language, and SWEETHEART (clued as "Valentine.") is a particularly apt choice.  My heart really started racing, though, when I discovered that the grid had just 66 words, since 66-word grids were not very common in the days when puzzles were all hand-constructed!  That said, I did notice a handful of unusual and/or esoteric entries:  PLEDGOR ("Legal term akin to promisor."), RAG TREE ("Sacred plant of ancient pilgrims."), MRS WHISTLER ("Famous 'visitor' to Atlanta."), ANGOSTURA ("Bitter bark."), and DELSARTE ("System of calisthenics.").  In the not-obscure-but-not-thrilling category, there's IN SAINT ("'Meet Me ___ Louis'"), REMASH ("Fix over again, as potatoes),  MULCHERS ("Implements for spreading straw, leaves, etc."), and several unsavory three-letter abbreviations.  Although there were more compromises than would have been ideal, I heartily enjoyed seeing the following hexad:  MORASS, DITHER, DEADEYE, SEAHORSES, AL SMITH, and DEWLAP.  I imagine solvers these days would fall into two camps with DURSTNOT ("Was afraid to: Archaic.")—I think it's a quaintly pleasing archaic term, but I can imagine others being frustrated because the word is no longer in common use.  A less controversial part of the puzzle that caught my attention was the timely clue for CHAD:  "African republic, as of 1960."  I always appreciate seeing pre-Shortzian clues that aren't purely definitional!  In sum, I appreciated this puzzle's ambitious theme and grid structure, warts and all.  I hope you all have a sweet and pun-filled Valentine's Day—for now, here's the answer grid (with highlighted theme entries).  The puzzle can also be viewed on XWord Info. 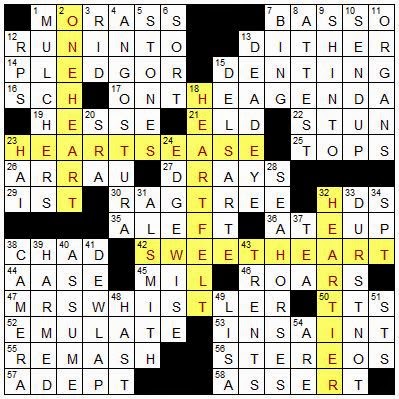 Posted by David Steinberg at 7:03 PM