It's been another busy week on the proofreading front, starting off with 5 puzzles from Mark Diehl on Friday night, which he followed up with 31 more Saturday morning, then another 31 that afternoon, and finally 30 more later on.  Tuesday night he sent another 31 puzzles, which were followed by 19 more.  Then early Wednesday morning Todd Gross sent 8 puzzles with 14 mistakes.  Soon thereafter Mark sent 7 more, and after that 31 came in from Denny Baker.  Thursday night Mark sent 26 more, which were followed by 31 more Friday afternoon.  Thanks so much again, everyone—we're continuing to make great progress!

Speaking of progress, I sent the 1960 proofread puzzles to Jim Horne at XWord Info Monday evening—to see them, click here.  Thanks again, Jim!  I'm hoping to have the 1959 puzzles ready within the next week or so.

Congratulations to Barbara Hindenach, who was the first to solve last week's Blast! challenge—again!  Barbara sent in her answer Wednesday morning and was also the first to solve the February 20 challenge!  Last week's clue, from the July 28, 1956, puzzle, was "Item on the Congressional agenda."  The entry:  FORTY-NINTH STATE.  How times have changed!


This week's Blast! challenge is up in the sidebar and is a real doozy!

Will Shortz in CROSSW RD Magazine

I'm continuing to make my way through the old issues of CROSSW RD Magazine, and this week I'm delighted to post Helene Hovanec's fascinating profile of puzzlemaster Will Shortz!  "Renaissance Man:  Will Shortz" originally appeared in the May/June 1992 issue and can be seen on Scribd by clicking here.  A comprehensive overview of Will's legendary life in puzzles, this article is only missing one thing that might appear in a similar piece today:  an allusion to his other great passion, table tennis!

Today's featured puzzle, titled "Triple Play," was constructed by Charles Baron; published April 8, 1956; edited by Margaret Farrar; litzed by Barry Haldiman; and proofread by Mark Diehl.  This innovative puzzle could well be the first Sunday-sized crossword with a triple-stack of grid-spanning entries!  And although I haven't yet looked through the last few years of daily crosswords, I wouldn't be surprised if this were the first Times crossword to contain a triple-stack of grid-spanning entries.  What makes this puzzle even more remarkable is that the constructor didn't just settle for an ordinary stack of 21-letter entries—he chose three that are somewhat related in that they could all fit under the umbrella of Americana:  THE SPANISH AMERICAN WAR, SOCIAL SECURITY BENEFIT, and UNITED STATES TERRITORY!  Other sparkly entries in the puzzle's 136-word grid include SARCASM, RAW FOOD, MARTYRS, LABRADOR, and LOVABLE.  I find it amazing that, despite the triple stack and wide-open corners, the constructor was able to squeeze in so much zip!  Not surprisingly, the stack and open corners necessitated a handful of major obscurities, such as AMANIA (Afghanistan gold unit.), CRIBRAL (Of sieve-like structure.), MATSURI (Japanese religious festival.), PAEGELS (Danish liquid measures.), and SISTANI (Natives of SW Afghanistan.).  That said, the majority of the entries crossing the tri-stack are perfectly fine.  Thus, from a technical perspective, I think the constructor did an admirable job!  The clues are mostly standard, though there are a couple that caught my eye:  "Scene of Russian visitation." for ENGLAND and "Descriptive of our age." for JET.  While looking through packets, I've made a point of noting every potential Cold War or Space Age reference I come across.  I'm hoping that all these contemporary clues, when read together, will provide a unique perspective on 20th-century history!  My dream would be to discover patterns in the pre-Shortzian crosswords that would detail a World War II or Cold War plot, sort of like what John Nash was seeking in magazines and newspapers in A Beautiful Mind, though I highly doubt that such patterns were present in the early puzzles.  So for now, I'll just stick to my goal of coming up with a new perspective!  Philosophy and speculation aside, here's the solution to the featured puzzle: 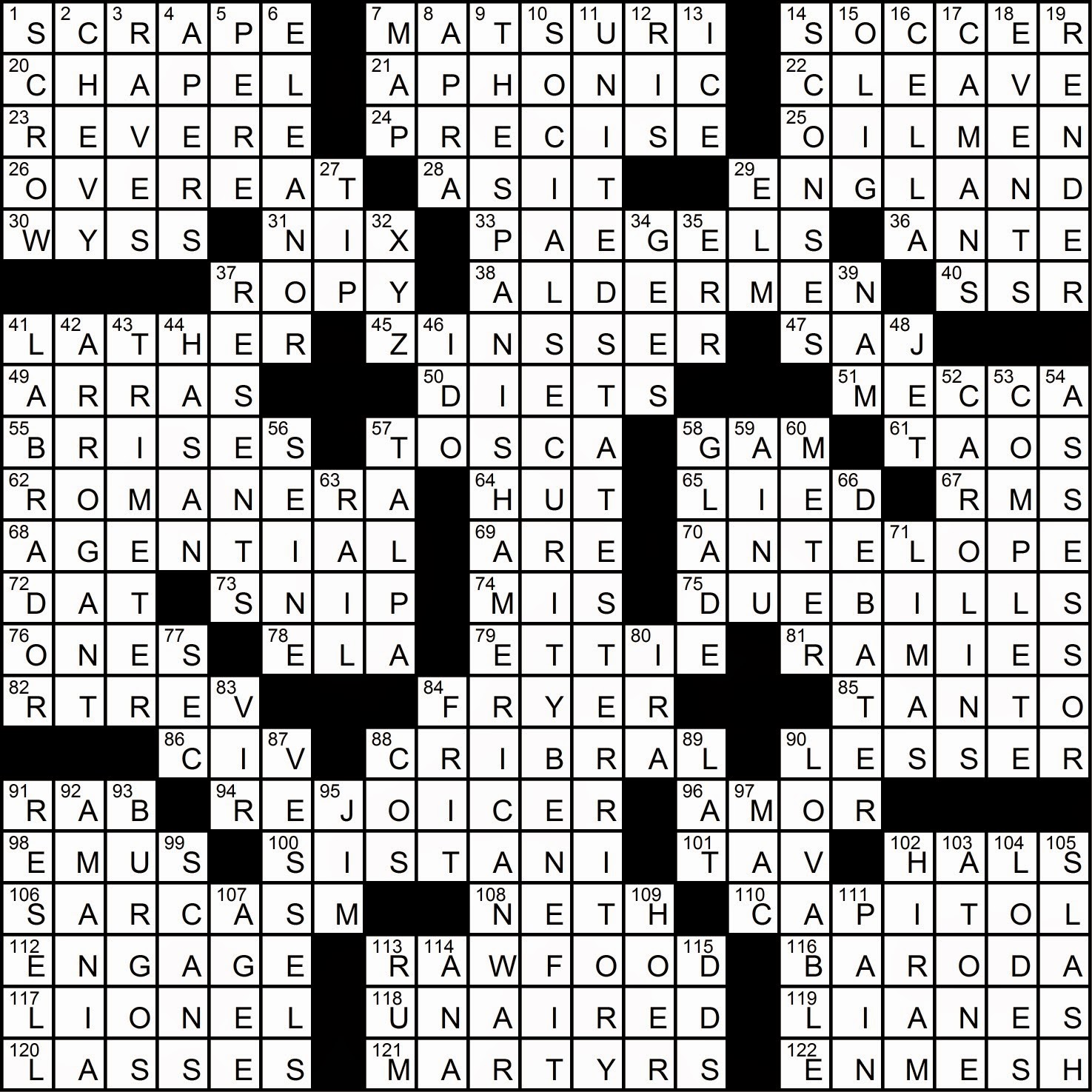 Posted by David Steinberg at 6:36 PM