This week we hit another milestone when I sent the proofread 1954 puzzles to XWord Info—there are now 40 years of puzzles up for everyone to enjoy!  Thanks again to Jim Horne for hosting them and making sure they're displayed as well as they can be!

The proofread puzzles have been coming in at a more relaxed pace over the past two weeks, in part because there's not much proofreading left!  The evening of Saturday, May 30, Denny Baker sent in 13 puzzles, after which I e-mailed him the very last batch for proofreading—all the way back to February 15, 1942!  Sunday morning he sent in those 11 puzzles, and then Monday afternoon Dave Phillips sent 6 more.  Tuesday afternoon, May 2, Mark Diehl sent in 13 puzzles from a ship on his way to Tallinn, and then about an hour later another 9.  There are only a few more puzzles out there, and I'm hoping to have those back within the next two weeks.  After that, there won't be any more litzing or proofreading until we're able to track down some of those missing puzzles!  Great job, everyone—thanks so much again!

A couple of months ago I received an e-mail from Alan DerKazarian, a librarian at the Cambridge [Massachusetts] Public Library.  Since there's a New England edition of The New York Times, Alan wondered whether the Boston Public Library might have microfilms of the missing puzzles and volunteered to check.  Unfortunately, he wasn't able to find anything there; he did discover, though, that in 1948 the Times introduced an international edition, which was produced in New York and airmailed to Paris for publication a day later.  "Starting in 1960," Alan reported, "it was set by teletype for same-day publication."  Apparently in 1967 the Times discontinued its international edition and joined with the owners of the defunct Herald Tribune and The Washington Post to publish The International Herald Tribune in Paris.


"So the international edition of the Times was never produced in Europe," he concluded, "meaning the paper strikes likely affected production of these issues as well."  Alan recommended contacting either the New York Public Library or the Times (which, I told him, someone else had already tried).  Alan had originally suggested I try traveling to Europe—a suggestion I liked a lot, by the way!  But since it will be a while before I'm able to do that, if any readers in Great Britain or France would like to look into this some more, I'd be most grateful!

Despite Alan's discouraging findings, I still do have hope that we'll locate at least some of the puzzles.  Margaret Farrar wrote the following in her introduction to Crosswords from the Daily Times–Series 9:

The crosswords that appear daily on the book page of The New York Times have been published concurrently in Paris and in Los Angeles since the inauguration of the International and the Western editions, in 1960 and 1962, respectively.  When newspaper publication in New York was suspended, in December 1962, the crosswords kept on going, flying east and west, until the twain met again in New York on April 1, 1963.

Those 100 puzzles appeared in this book and have already been litzed, but there are still many more missing puzzles from other strikes and because of ProQuest mistakes.  Hopefully we'll eventually find them; in the meantime, thanks so much again, Alan, for your great research!

On Monday, June 1 at 2:28 p.m.—just three days after I posted the May 29 Blast! challenge, with only three letters revealed, and while traveling between Copenhagen and Tallinn—Mark Diehl sent in the correct answer and became the first six-time winner!  Congratulations again, Mark!   The clue from the March 20, 1952, puzzle was "Reluctant new taxpayer."  The answer:  BOOKMAKER.  I'll bet there were plenty of objections to that change!


The new Blast! challenge is up in the sidebar, and it's a doozy—good luck!

Spreading the Word at ideacity

On Monday I'm heading off to Toronto, where I'll be giving an ideacity talk about crosswords.  Part of my speech will focus on The Pre-Shortzian Puzzle Project—I'm looking forward to spreading the word about our amazing progress in such a (relatively!) short period of time!

Right after I get back from Canada, I'll be leaving to be part of a panel discussion in Nevada, so the next blog post will appear after I return, on Monday, June 29, instead of Friday the 26th.  And then I'll be heading up to Vancouver for the National Puzzlers' League convention—and a couple of weeks later, to Northern California.  With all this traveling, my schedule will be pretty busy and irregular, so instead of posting each week on Friday, I'll be writing as time permits when there's news or a feature to present.  Now that the proofreading is almost done, there won't be weekly updates to report, but I'll still be posting when the puzzles go off to XWord Info and when (not if!) there's new information about the missing puzzles.

Today's featured puzzle was constructed by Roberta Morse; published September 6, 1954; edited by Margaret Farrar; litzed by yours truly; and proofread by Mark Diehl.  The puzzle has been uploaded to XWord Info, so you can solve it before reading the write-up.  This crossword's theme is centered around a nifty little number rebus.  I especially like that the 1, 2, 3, and 4 squares appear in order in the grid, even though they're not placed symmetrically.  I also appreciate that 1-Down is literally 1 DOWN—and, by extension, that the 1 is in square one.  I find it slightly off-putting that the FIVE in FIVE STAR ADMIRAL is spelled out, but I appreciate the effort to make the central 15-letter entry thematic.  I personally would have preferred a reveal entry in that position, but given that this is likely the first published rebus crossword, I'm more awestruck by the innovation than annoyed by the minor inconsistency!  By bringing the word count up to 80, the constructor was able to keep the fill smooth and incorporate a handful of lively entries into the nonthematic fill.  My favorites are BARRACUDA, OVERTHROW, TEETOTALER, THUNDERS, BARNYARD, and ENDEARMENT—that's a lot of zip for a themed puzzle, let alone a rebus!  Conversely, the constructor was stuck with the awkward partial LAK A (as in "Mighty Lak a Rose"), CIRO (clued as "Well-known Paris restaurateur."), JURA ("Franco-Swiss mountain range."), and SAROS ("Gulf of the Aegean Sea.").  I also wasn't thrilled to see TEN STONE in the grid, since it contains a number that's not part of the sequence.  This is a remarkably small number of liabilities given all the assets, though!  So even with its drawbacks, this puzzle is definitely one of my favorites from 1954.  I am, however, a bit surprised that Margaret Farrar chose to run it on a Monday—usually she saved puzzles that were extra-tricky for Saturdays.  Then again, the fill was pretty clean, and I remember reading somewhere that Margaret's philosophy about difficulty was that higher word counts led to easier solves.  This raises an interesting point:  Was Margaret right?  My first instinct would be to disagree, since any puzzle can be made easier or more challenging via the clues.  Also, many ambitious stunt puzzles (such as bidirectional rebuses) require grids with higher word counts to pull off.  That said, puzzles with higher word counts also tend to have more shorter entries, and there are only so many 3-, 4-, and 5-letter entries that show up in crosswords.  Often, these common short entries are difficult to disguise, even if their clues are tough.  Take ENERO in my New York Times crossword that was published today.  The clue was "Part of summer in Latinoamerica," which is definitely not as straightforward as "January, to Juan," but I would still instantly fill in ENERO since . . . what else could it be?  Perhaps the difference between average and expert solvers is that experts have a predetermined list of common entries subconsciously at the fronts of their brains—when they see a new clue, they automatically run through this list and frequently land on the correct answer instantaneously.  In any case, I thoroughly enjoyed looking through this Roberta Morse crossword.  The solution grid (with highlighted theme entries) appears below; the puzzle can also be accessed and analyzed on XWord Info here. 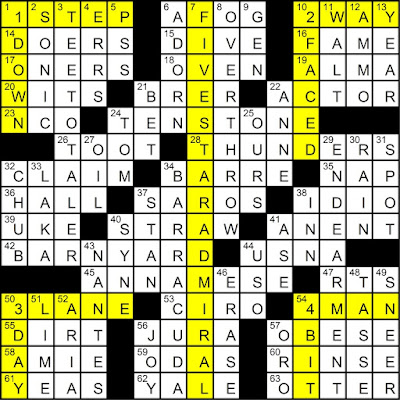 Posted by David Steinberg at 4:59 PM