Grace Fabbroni on Her Crossword Career—Plus More Todd Gross Finds and His Interview on the L.A. Times Crossword Corner

Grace Fabbroni on Her Crossword Career

Recently I heard from crossword historian Todd Gross, who'd been in contact with pre-Shortzian and Shortz-era constructor Grace Fabbroni on LinkedIn.  Grace wondered why her byline had been listed as "Mrs. John Fabbroni"—a name she never went by—instead of "Grace Fabbroni."  I explained to Todd that we'd just used whatever name had been listed with the puzzles but that this new information was very helpful and we'd change all her bylines.

Todd also noted that Grace planned to send something about her crossword career, which she did—here it is: 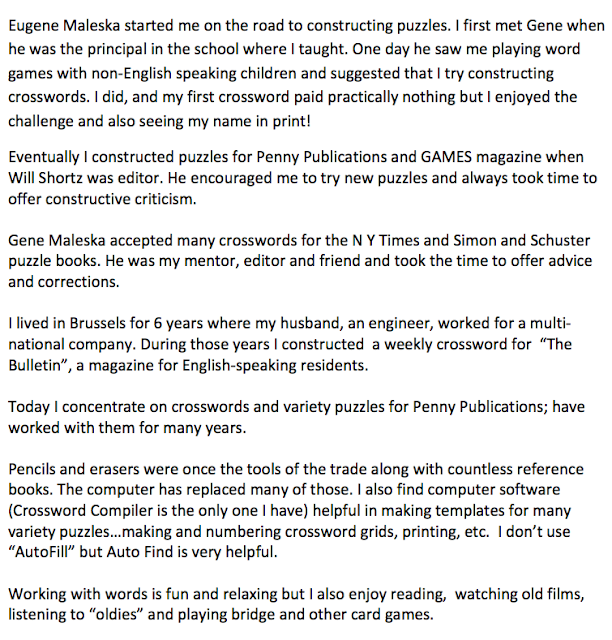 Thanks so much again for letting me know about this, Todd, and for this wonderful reminiscence, Grace!

A couple of months ago, Todd also told me about a 2004 article (and photo) he'd found on pre-Shortzian and Shortz-era constructor Frances Hansen, who passed away some six months later.  The link worked then but unfortunately has since disappeared.  I've listed the article on the Pre-Shortzian Constructors page, though, so you may be able to track it down through your local library.

Todd also found some fascinating obituaries for editor/constructor Eugene T. Maleska and constructors Alex F. Black, Terry [Teresa] Healy, Maurice J. Teitelbaum, and Jack Jumonville, all of which you can see by clicking on the individual links here or on the Pre-Shortzian Constructors page.  The Alex Black obituary also contained this photo taken by his family:


Todd did some additional research on Jack Jumonville—here's his report:

I went to Ancestry.com to see if I could find more about Jack Jumonville.  There's a fair amount there, including pictures from his college yearbook.  He was a member of a fairly elite club at LSU called Samurai, which means a larger than normal picture.  I'm enclosing what I found . . . the picture of young Mr. Jumonville not quite what I expected. . . . There's also a private story and a private picture of him.

Here's the earlier photo of Jack from the Louisiana State University yearbook that Todd found, along with some information about the Samurai organization Jack belonged to:

Thanks again, Todd—it's always great to learn more about the lives and careers of these early constructors, who, in addition to their crossword talents, often had successful unrelated careers and other wide-ranging interests!

Finally, Todd was recently interviewed for the L.A. Times Crossword Corner!  In his interview, which you can read by clicking here, he mentions the Pre-Shortzian Puzzle Project and talks about his interest in crossword history and career as a constructor for The New York Times and other top publications.  Congratulations, Todd!
Posted by David Steinberg at 5:40 PM