Over 7,900, Man vs. Machine, in 1972, Daily-Puzzle Authors, Poll Results, and New Feature on Pre-Shortzian Constructors

We've now litzed more than 7,900 litzed puzzles—just a couple hundred more and we'll be at the halfway point!  On Sunday litzer Mark Diehl sent in 15 puzzles, which put us over 7,700, and then on Tuesday, Howard Barkin sent in 28 puzzles, putting us over 7,800, followed by another 21 puzzles this morning, which put us over 7,900!  And all the other packets from everyone have really helped push us along—thanks again, everybody!

Mark and Howard are still taking turns in the litzing contest's first-place position—as I write this, they're tied for the lead!  In a way, this has become a sort of battle between man (manual litzing) versus machine (OCR), not unlike the competition between human solvers and Dr. Fill at the ACPT!  Whatever the final result, it's all good for the project—Mark and Howard have each litzed more than 400 puzzles in the past 6 weeks!

I'm now sending out puzzles from 1972 to be litzed, so it won't be long before we're in the 1960s!  A couple of litzers have been saddened by the lack of authors for the daily puzzles now.  Although I'm hopeful that the authors of most puzzles will ultimately be identified, many will likely never have bylines.  The good news is that daily-puzzle authors will start reappearing in 1967, during the Margaret Farrar era.

The results of last week's poll are in!  The poll asked whether you thought last week's featured puzzle contained a rifle-related theme.  Most readers (55%) voted no, but the remaining respondents were evenly split between yes and unsure.  If you felt certain one way or the other (yes or no), I'd be interested in hearing why.  Please comment below or e-mail me.

Today's featured pre-Shortzian puzzle was constructed by Evelyn B. Rosenthal.  In addition to being a prolific crossword constructor in the 1970s, Evelyn was also the high school math teacher of Crosswords LA director Elissa Grossman's father.  It's amazing how small the crossword puzzle world is!

The puzzle was originally published on November, 14, 1975, and was recently litzed by Alex Vratsanos.  This lovely Will Weng–edited construction features eleven theme entries for which the first part of the entry rhymes with the second (and, as Jim Horne just pointed out, the two parts—and, in one case, three—are also pronounced the same!).  The theme density is amazing—getting three theme entries to stack in each corner and the five other theme entries to interlock so elegantly must have been extremely challenging!  My favorite theme entries are DEAR DEER (clued as "Bambi, e.g."), ROAM ROME ("See the Eternal City"), and PLAIN PLANE ("Ordinary carpenter's tool").  EERY ERIE ("Weird lake") and TWO TO TWO ("1:58") feel weaker, but they're certainly better than nonthematic entries.  The nonthematic fill is a real mix on this one—I love the Scrabbly entries RAJPUT, ZWEI, PONZI, and DAFFY, but RYE OLD ("___-fashioned [cocktail]"), T MOORE ("Signature of an Irish poet"), and ENTEMPLE ("Set up a shrine") certainly aren't the best.  Warts and all, this is an outstanding pre-Shortzian puzzle and a stellar example of pre-Shortzian interlock!  The answer grid, with highlighted theme entries, can be seen below: 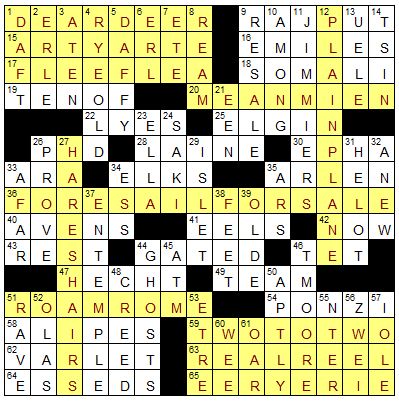 As we've continued to work through the Will Weng era, I've been litzing some of the Margaret Farrar–edited Sunday puzzles from 1942.  I find all the clues related to World War II (and that time period in general) fascinating, since they show how the United States felt about certain historical figures and also chronicle specific weeks in history.  The March 1, 1942, crossword alone, which was constructed by Charles Cross (an alias), contained at least eight topical clues:

The clues for APPEASER and WINTER are particularly amusing—even though our country took World War II very seriously, there was apparently still room for irony and humor in the press.  The clue for DUCE isn't particularly funny, but it's certainly historically significant in that it shows how Hitler felt about Mussolini.  I look forward to seeing what other war-related clues I come across as I continue litzing these puzzles!  In the meantime, below is a picture of the GNEISENAU:

Posted by David Steinberg at 9:18 AM