Great news:  The 1986 puzzles are now up on XWord Info, and we've begun proofreading puzzles from 1985!  We're also now sending out puzzles from 1973 to be litzed—it won't be long before we're in the Margaret Farrar era!

We're also now at the halfway point in the litzing contest, and I'm delighted to report that we've litzed more than 7,400 puzzles!  At the beginning of January, we'd litzed 6,198 puzzles, and we're now at 7,441.  So in just one month, we've litzed 1,243 puzzles—a phenomenal achievement, surpassing even the first litzing contest in terms of number of puzzles litzed!  Our goal is the halfway point—8,113—by the end of February, so we only have 672 more to go in the next four weeks.  Awesome job, everybody!

Some of you have commented on what appears to be a neck-and-neck race between longtime litzing legend Mark Diehl and already-astounding Howard Barkin.  Mark put us over the 7,300 mark on Sunday and then over the 7,400 mark yesterday, and he has now litzed more than 2,000 puzzles—another all-time litzing record!  Congratulations, Mark!  And Howard, who just started litzing at the beginning of January, has already litzed more than 300 puzzles—that's approximately 10 per day.  Great job, Howard!  Here at Litzing Central, I never know what's going to come in or when:  Last night at 8:18, I received 23 litzed puzzles from Mark; just three minutes later, at 8:21, an e-mail with 19 litzed puzzles came in from Howard!  Then, a couple of hours later—at 10:06, to be precise—5 more puzzles arrived from Mark, putting Mark and Howard in a tie, with 308 litzed puzzles each during the contest!

The 616 puzzles from Mark and Howard comprise slightly less than half of the 1,243 that have been litzed so far this month, so all the other puzzles from everyone else are helping an enormous amount too!  Thanks so much, everybody—I think we'll be over the Halfway Hump in just a few weeks, if not sooner!

In other news, we have a new Litzer of the Month for February:  Denny Baker, who, as I've written before, is a constructor and was a litzer back in the day when Barry Haldiman was litzing his favorite puzzles!  To read more about Denny, click on his photo on the right or the Litzer of the Month tab above.

Also, I recently received an e-mail from Amy Reynaldo (Diary of a Crossword Fiend), who forwarded an e-mail she'd received from David Astle ("DA").  DA is putting together what sounds like a fascinating book that will celebrate the first 100 years of crossword puzzles.  The Great Clue Chase will contain 100 mini-chapters containing different stories linked to each of the 100 years.  DA is interested in "good stories, remarkable puzzles, flukes, backfires, Russian, Ninas, firsts and lasts" to fill out his timeline.  He comments that the "best stuff has a year attached—the further back the better often—as well as neat story."  He's not reproducing puzzles—just providing a clue or two and telling the story.  If you have any ideas or stories for this book—there are probably many about puzzles from the pre-Shortzian era!—contact DA through his web site.  Anyone who sends a "zinger" will receive a copy of DA's Puzzles and Words, a new book of word origins and connected word puzzles!

Today's featured pre-Shortzian puzzle, "Living It Up,"  was constructed by Frances Hansen.  It was originally published on December 29, 1974, and was recently litzed by Mark Diehl.  This is one of several Will Weng–era quote puzzles I've seen that doesn't work the same way as a modern quote puzzle.  Instead of dividing the quote by natural word breaks, the constructor broke the quote at every twenty-third letter; the quote simply continues from line to line in an acrosticlike fashion!  Nowadays this puzzle probably wouldn't fly because of the word-break issue, even though the constructor's original verse is very clever.  Interestingly, Maleska probably would have rejected this puzzle as well.  In all the many Maleska-edited quote puzzles I've looked at (some of which were constructed by Frances Hansen), I have yet to encounter a straight quote puzzle with this kind of word breakage (though I have seen several step quotes).

Back to the puzzle.  The ingenious verse reads:  A DEFIANT OLD MAID, PRAY FORGIVE HER, REMARKED WITH A HABIT OF A QUIVER: "TONIGHT I SHALL SMOKE AND DRINK TIL I CHOKE AND NUTS TO MY LUNGS AND MY LIVER."  It's amazing that the verse, in addition to being exactly 115 letters long, makes perfect sense (even with the word-break issue)!  Also, the fill, in addition to being pangrammatic, feels more polished and clean than the average Will Weng–edited Sunday.  I especially like the entries ROOF JOBS, RAFFISH, and TABASCO!  I can do without AANI (clued as "Dog-headed ape"), ADMIS ("African gazelles"), DHAVA ("East Indian gum tree"), NABO ("P. I. shrub: Var."), and TONDO ("Circular painting"); nevertheless, this is a remarkably small number of flat-out obscurities for a hand-constructed 23x.  Is anyone else surprised that Will Weng allowed the entry HOMICIDAL into the grid?  To me, this seems to violate the breakfast test. . . .

Even though it has its weaknesses, this crossword provides insight into what quote/verse puzzles looked like before the Maleska and Shortz eras.  I look forward to seeing how other types of themes evolve as we continue to litz through the Weng era and further back into the Farrar era!  This puzzle's answer grid (with highlighted theme entries) can be seen below: 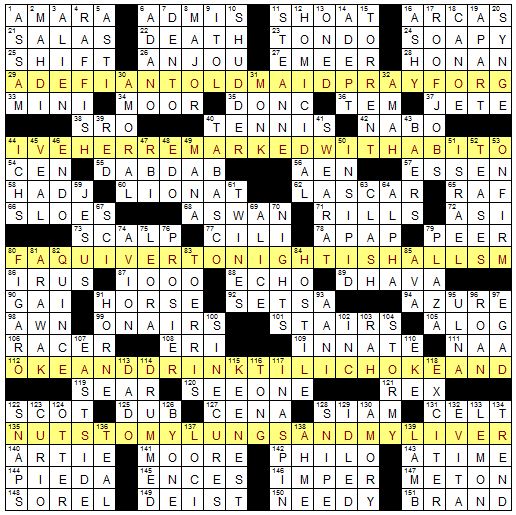 Today's featured pre-Shortzian clue appeared in the November 28, 1950, puzzle by Thomas Meekin, which was edited by Margaret Farrar and recently litzed by yours truly.  The clue, which led to EXTRACURRICULAR, read: "Describing activities now lacking in N.Y.'s public schools."  Apparently in 1950 and 1951, New York teachers were dissatisfied with their salaries and decided to boycott extracurricular activities until their pay rates were increased!  I find this kind of historically significant clue fascinating—there's hardly any information about the boycott anymore.  Each pre-Shortzian puzzle (particularly those edited by Margaret Farrar) is a snapshot of major events occurring when it was published!  Below is a picture of children in a classroom from the 1949–50 school year:

Posted by David Steinberg at 5:51 PM