Metaleska was a huge success—thanks so much to everyone who entered the contest (and thanks again, Jim, for hosting the puzzle and instructions on XWord Info!)!  The feedback I received was overwhelmingly positive, which means I'll definitely consider constructing another Pre-Shortzian Puzzle Project metapuzzle next year.

Overall, 548 solvers downloaded the Metaleska Instructions PDF, 177 downloaded the puzzle PDF, and an unknown number downloaded the Across Lite file.  Of those people, 18 submitted solutions to the contest, and 10 of these were completely correct; several other people wrote that they had enjoyed trying the puzzle but had been unable to finish it.

The first-prize winner, Jeffrey Harris, correctly solved Metaleska just 1 hour and 32 minutes after it was posted, which is incredibly fast!  The other two winners were selected using an online random-number generator.  Here are the winners:

Congratulations Jeffrey, Todd, and David—and everyone else who submitted a correct entry!  Metaleska proved to be a real challenge!  Now that the contest is over, I'm posting a complete explanation of the metapuzzle.  First and foremost, here's the filled-in puzzle grid: 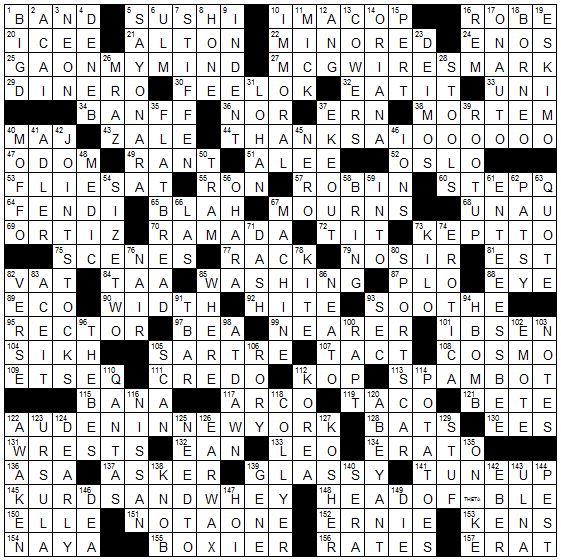 Next, here are the theme entries and the puzzles I intended them to fit into, in order from top to bottom and left to right:


When the eleven extracted letters are combined and anagrammed, they form the meta-clue "Sunken fence."  The meta-clue leads to the meta-answer HAHA (which Tyler Hinman pointed out was reused in this sense of the word, though with a different clue, in the Shortz era in one of his own puzzles).  The better clue is "Laughter," which is hidden inside the clue "Slugger Slaughter" (24-Across).  This better clue tripped up almost all the incorrect entrants, many of whom were very close.  Incorrect submissions included "April fool," "Monkeyshine," "Histrionics," and "Laugh."  Test solver Todd Gross initially came up with "April fool" as the better clue, which I hadn't noticed when constructing the puzzle.  I modified the instructions to eliminate this possibility by stating that the better clue was a single word longer than five letters.  This specification also eliminated "Laugh" as a possible answer.

The puzzle contains several Easter eggs (hidden bonuses).  The first is the inclusion of two pieces of uniquely pre-Shortzian crosswordese, TAA ("Chinese pagoda") and UNAU ("Entry a slothful constructor might use"), the latter of which was traditionally clued as "Two-toed sloth."  Both these entries were very common in pre-Shortzian puzzles but have yet to show up in a Shortz-era puzzle.

The second Easter egg (which I feel is much cooler) is the STEP/QUOTE hidden at 60-Across/63-Down, which reads in a Stepquote fashion.  The Stepquote is a crossword form that was invented by Dr. Maleska himself and was first published in 1964 under Margaret Farrar's editorship.  Stepquotes have been widely criticized recently for their lack of thematic material, though they were quite revolutionary back in the day.

The third Easter egg is the entry GENE, which was clued as "Maleska, to friends."  I read that Maleska's longtime girlfriend and first wife was named Jean—in fact, the two of them were often referred to as a "Chromosome" (two genes, homophonically).

I didn't discover the fourth and final Easter egg until I'd begun to research possibilities for Metaleska—the meta-clue (and a major hint to the better clue) is hidden within another pre-Shortzian Sunday puzzle with a theme similar to "Stand-Ins"!  This puzzle, titled "Trace the Transitions," was constructed by T. W. Underhill and was originally published on August 21, 1988.  This added twist, which I think is quite elegant, proves that the puzzle is entirely pre-Shortzian!

One of the goals of Metaleska was to expose today's constructors and solvers to some of the brilliant pre-Shortzian puzzles published in the Maleska era.  Even though the crossword puzzle scene has dramatically changed since Will Shortz became editor, these puzzles still possess remarkable aesthetic value.  I hope generations of crossword puzzle fans explore and learn from these pre-Shortzian puzzles as much as I have!  As Maleska traditionally signed off, "Pax, amor et felicitas" (Peace, love and luck).

With the conclusion of the Metaleska contest, this seems like a particularly apt time to comment on Jim Horne's news this past week that his wonderful site, XWord Info, will be winding down in its current form.  For me, XWord Info has always been there, a treasure trove of puzzles, statistics, charts, observations, and analytic tools—everything anyone could possibly want in a New York Times crossword site.  It's hard to imagine a crossword world without XWord Info, and I hope that someday it will ramp back up again.  My dream has always been to have all the New York Times crosswords—Shortz-era and pre-Shortzian—available on one site.  Thanks so much for creating XWord Info, Jim, and keeping it going for the pre-Shortzian puzzles.  It is truly a masterpiece and will be deeply missed by many.
Posted by David Steinberg at 9:10 AM