Metapuzzle Coming to a Close, July Litzer of the Month Todd McClary, Project Update, and Summer at the Pre-Shortzian Puzzle Project

Metaleska, the Pre-Shortzian Puzzle Project's first anniversary metapuzzle, is coming to a close—be sure to submit your entry by tomorrow at 11:59 p.m. (right before midnight) Pacific Time to be eligible to win an awesome prize!  I'll be posting the results, as well as an explanation of the puzzle, on Sunday, so check back again then for that update.

And the proofreading is progressing as well!  The 1982 puzzles were sent off to XWord Info, where they'll be fully posted after the Metaleska contest is over.  (Thanks again, Jim!)  In addition to finishing off the last month of the 1982 puzzles he was proofreading, Todd Gross also started in on 1981 and sent a batch from that year.  In addition, Tracy Bennett sent in her first month of 1981 puzzles and is now at work on her second.  Thanks so much, everyone!

As you can see, even though it's summer, the Pre-Shortzian Puzzle Project continues apace!  This coming week I'll be flying to Austin for the National Puzzlers' League convention and immediately thereafter heading to Stanford, where I'll spend three weeks taking a course on artificial intelligence.  I'm really excited about this opportunity and hoping to learn a lot more about how machines like Dr. Fill "think"!  The litzing, proofreading, and packet-sending will continue without interruption, and I'll be posting here as time permits.

Today's featured pre-Shortzian puzzle, "Having the Last Word," was constructed by Will Weng, edited by Margaret Farrar, and litzed by lightning-fast litzer Martin Herbach (a dazzling trio indeed!).  Will Weng constructed many hilarious and brilliant pre-Shortzian puzzles for Margaret Farrar—just imagine how many interesting and unusual pre-Shortzian puzzles would have been published if Weng had been an editor.  Oh, wait—I've already had the pleasure of reviewing almost every single crossword from the Weng era!  All joking aside, this rather macabre Weng puzzle, which was published on November 10, 1968, features nine interlocking (albeit not quite symmetrical) theme entries that are clued as different working professionals' famous last words.  All nine of the theme entries are chuckle-inducing—two of my favorites are LET'S PICK OUR OWN MUSHROOMS (clued as "Gourmets' last words") and IT'S LIKE MONEY IN THE BANK ("Horseplayer's last words")!  I DIDN'T KNOW IT WAS LOADED ("Famous last words") is pretty good also, though it's a bit dark for my taste.  The nonthematic fill is quite nice on the whole—I especially like the entries KERCHOO, SADDLEBAG, LANDLINES, TWEEZES, DOODAD, and DAGWOODS ("Big sandwiches"), the last of which makes my mouth water!  I also find it quite elegant that Weng managed to squeeze the semithematic entry DEATH into the grid, which he cleverly disguised in the clue "Bored to ___."  Some of the nonthematic clues are also brilliant and further exemplify Weng's sense of humor, such as "Punch's advice to those about to marry" for DON'T.  Not-so-great clues/entries include the longish partials A HAND ON, LIKES AND, A TOTAL, LOST IN, and TOASTS OF; the abbreviations EVNGS (evenings) and STP (stamp); AMN'T ("Relative of ain't"); and the contrived phrase PAR IT ("Advice to golfer starting a hole").  In sum, this is a very interesting and unusual Weng puzzle that I consider a harbinger of all the great puzzles he edited!  The answer grid (with highlighted theme entries) can be seen below: 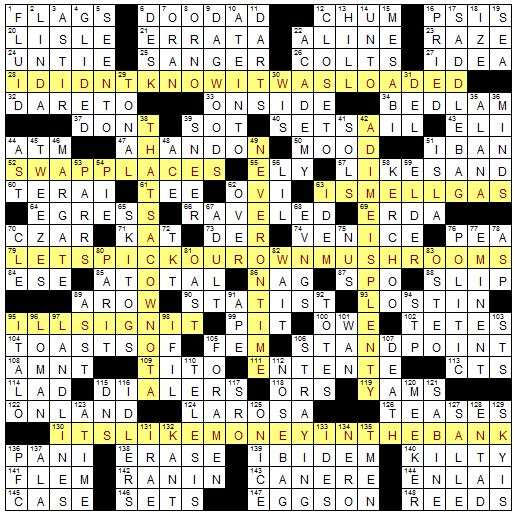 As we've continued back into the Farrar era, when many more of the puzzles were themeless, I've noticed an increasing number of unusual-yet-awesome-sounding entries.  Here's a trio of wacky ones from Farrar-edited puzzles:

Posted by David Steinberg at 6:24 PM