Great news:  Late last night—a week early!—we reached the Litzstarter goal of litzing 13,000 puzzles by the end of October!  At 10:57 p.m., Mark Diehl sent in 21 puzzles that put us over the top—awesome job, everyone!  We've now litzed exactly 13,021 puzzles, 356 of which came in this past week!  The puzzle deluge started off very early Saturday morning, with Mike Buckley sending in 7.  Later that morning, Ralph Bunker sent in 28 more puzzles, putting us at exactly 12,700 on the litzing thermometer!  Saturday evening, Vic Fleming sent in 14 puzzles.  Then Sunday morning, Mark Diehl sent a 42-puzzle mega-batch, which was followed 17 minutes later by 28 more from Ralph . . . and then another 28 from Ralph that evening, putting us over 12,800 on the litzing thermometer!  Monday morning, Brian Kulman sent in 7 puzzles, which were followed that night by 28 more from Mark.  Tuesday afternoon, Nancy Kavanaugh sent in another mega-batch of 41 puzzles, putting us over 12,900 on the litzing thermometer (and her regular total at more than 800 and contest total at more than 300!)!  That night, Vic sent in 6 more puzzles.  Wednesday morning, Denny Baker sent in 7 puzzles, which were followed one minute later by 28 from Ralph.  That afternoon, Vic sent in 1 more puzzle, and then in the evening, Todd Gross sent in 7 proofread puzzles.  Thursday afternoon, Vic sent 7 more puzzles.  A short while later, Tracy Bennett sent in 7 more puzzles, which were followed 23 minutes later by 7 more from Vic.  A few hours later, Ralph sent in 28, then Mark sent in 21 more, putting us over 13,000 on the litzing thermometer (and his own regular total at more than 3,900!)!  Late this afternoon, Mike sent 7 more, and Howard Barkin sent in an additional 14 this week as well—thanks so much again, everyone!  We're now on our way to 14,000!

For those of you reading this who haven't been able to litz during the contest, there's still time!  By litzing 2–3 puzzles a day for the remaining 6 days of Litzstarter, you can be eligible for the Grand Prize drawing of free admission to the 2014 ACPT!

With all this litzing, we've moved into another year:  1958!  In searching for a representative event from that year, I discovered that 1958 was the year 14-year-old Bobby Fischer won the U.S. Chess Championship.  At 14, he was the youngest to have done so, and even after all these years, his record still stands.  Arguably the greatest chess player who ever lived, Bobby Fischer died in 2008.  Below is a photo of the young Bobby Fischer:


In other news, yesterday PuzzleNation published an interview with me in which I discuss the Pre-Shortzian Puzzle Project, among other things.  To read it, click here.

A few days ago, I received another e-mail from Lyn Silverstein, the daughter of pre-Shortzian constructor Jules Arensberg.  She had attached a copy of a charming invitation—decorated with crosswordese!—Margaret Farrar had sent to Lyn's mother 10 years or so after Jules died.  The invitation was to a celebration of 50 years of Simon & Schuster crossword puzzle books (April 10, 1924, to April 10, 1974).  This amazing event took place at the Private Dining Room of The New York Times—here's the invitation: 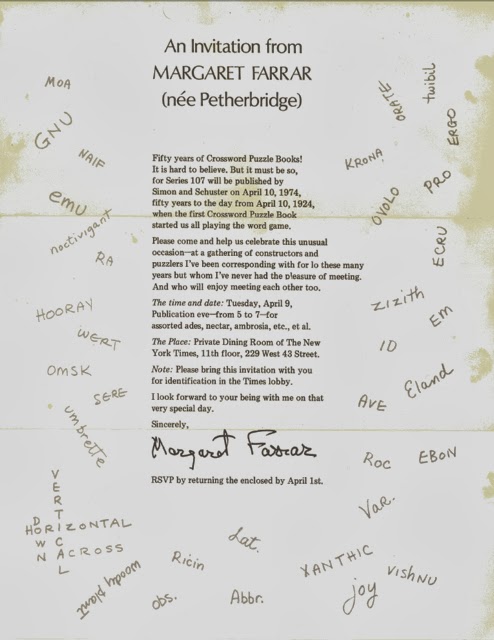 Thanks so much again, Lyn!  If anyone remembers attending this party, please comment!

Today's featured puzzle (whose constructor is unknown) was edited by Will Weng, litzed by Todd McClary, and originally published on April 1, 1969.  I think Will Weng started the tradition of running an unusual puzzle on April Fool's Day each year, as the April Fool's Day puzzles I've seen so far from the Farrar era seem like ordinary puzzles.  If so, then this was the first of the bizarre April Fool's Day puzzles!  This wacky and novel crossword features 12 theme entries that contain actual apostrophes in them, such as ENTR'ACTE, DON'T, and WE'RE, a gimmick not reused in The New York Times for many years thereafter.  In fact, this is the earliest puzzle I've seen with punctuation marks in the grid!  Aside from the interesting theme, the nonthematic fill has some very nice longer entries, such as WINE TASTER, ADORABLE, and RESEMBLING.  The rest of the fill, however, feels rather strained, which is most likely a by-product of the theme density.  The not-so-great entries include a host of pre-Shortzian crosswordese (SAIC, ANANA, ARADO, et al.); MARMORA (clued as "Turkish sea."); ABT ("German composer."); ONE O ("___'clock), which, in addition to being an awkward partial, also has an apostrophe that isn't in the grid; and MSTA ("River to lake Ilmen.").  Despite these clunkers in the fill, I appreciate that Will Weng took a risk and published this ground-breaking April Fool's Day puzzle!  The answer grid (with highlighted theme entries) can be seen below: 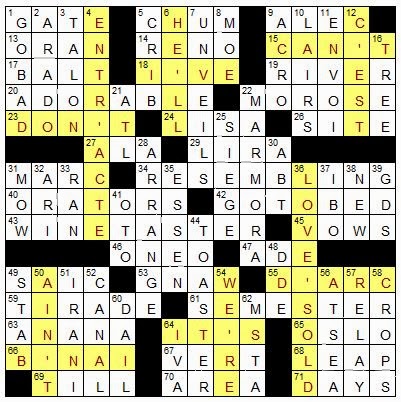 I've come across several clues with debatable stereotypes about teenagers in crosswords from the middle to late 1960s, which makes sense since teenagers were heavily involved with the counterculture back then (much to the chagrin of their parents).  There is some truth to these teenage-stereotype clues, though I was disappointed not to see a clue referencing teenagers who build crossword puzzles!  In any case, here are the clues I've found, along with a 21st-century teenager's assessment of each one:
I didn't have to look too far to find a picture of a teenager—in fact, I even found a picture of one carrying a telephone in his backpack like his contemporaries did before cellphones were invented!

Posted by David Steinberg at 6:58 PM