It's been an awesome week on the litzing front, with more than 300 puzzles sent in—probably the most ever!  As I write this, we've now litzed 12,665 puzzles, so we're definitely on track to hit the 13,000 mark by the end of this month.  The week started off with a whopping 28 puzzles early Saturday morning from Ralph Bunker.  That afternoon, Vic Fleming sent in 7 more, then in the evening, Ralph sent in another 28, putting us over 12,400 on the litzing thermometer (and his own total at more than 200!)!  Sunday morning, Mark Diehl sent in 21 puzzles, then late that afternoon, a mega-batch of 42 puzzles came in from Nancy Kavanaugh (putting her in the number 3 position in the regular totals, after Mark Diehl and Barry Haldiman et al.!).  Sunday evening, Ralph sent in 28 more puzzles, which put us at more than 12,500 on the litzing thermometer, and Monday morning, Todd Gross sent in 10 proofread puzzles.  Monday afternoon, Vic sent 7 more litzed puzzles, then a little over an hour later, 7 more came in from Denny Baker.  Tuesday morning, Brian Kulman sent in 7 more.  Wednesday evening, another 28 puzzles came in from Ralph, and then early Thursday afternoon, he sent 28 more!  Thursday evening, Vic sent in 14 puzzles, putting us over 12,600 on the litzing thermometer, then another 28 came in 9 minutes later from Mark (putting his personal total at more than 3,800 litzed puzzles—he should be topping 4,000 soon!).  Friday morning, Ralph sent another 28 puzzles (making a ginormous total from him of 168 for the week and 315 overall!), which were followed less than half an hour later by 7 more from Brian.  Terrific work, everyone—thanks so much again!

To those of you who haven't sent in any puzzles so far during Litzstarter, there's still time!  In addition to all the great rewards starting at 25 or more puzzles, after litzing just 14 you become eligible for the Grand Prize drawing for free admission to the 2014 ACPT!  Though your chances increase the more puzzles you litz, anyone who's litzed at least 14 puzzles could win this awesome prize!

In other news, Mark Diehl came across another clue that's a bit vague, to say the least!  The clue, for the entry SMITH, read "2,457 girls."  Well, I'll bet that one became outdated pretty fast!

Today's featured puzzle (whose constructor is unknown) was edited by Margaret Farrar, litzed by Mark Diehl, and originally published on May 14, 1968.  This nifty construction features six symmetrically interlocking theme entries that start with a color and end with an animal, such as WHITEHORSE and PURPLE COW.  As a bonus, the theme entries aren't simply more specific varieties of their respective animals—that is, the constructor passed up on entries like GRAY WHALE and YELLOW WARBLER that have very limited cluing options.  The puzzle definitely feels a cut above its contemporaries in terms of theme—it was rare to see a puzzle with even a simple animals or colors theme back in the late 1960s, let alone a combination of the two!  The only theme entry I don't like is BLACKHAWKS, and the only reason I feel it's weak is because of its clue ("Indian chief and namesakes.").  I would have much preferred a reference to the Chicago ice hockey team—I can't imagine Blackhawk has very many namesakes.  The fill also feels less than stellar in places—although DAYTON, FOAM, and UNDERAGE are nice, I could do without MANU (clued as "By hand: Prefix."), PPL ("Verbal form: Abbr."), ORRA ("Not matched: Scot."), RATAS ("Timber trees of New Zealand"), MILLA ("Mile: Sp."), HERAS ("Namesakes of a goddess."), and AH AH ("Sounds of appreciation.").  The rest of the fill relies more on uninspired crosswordese than would be ideal per modern standards, and I'm rather ambivalent about some of the longer nonthematic entries (STRAW MAN ["Scarecrow."] and DAWN PATROL ["Flying mission."]).  One entry that really stood out to me, however, is APOLOGISTS (clued as "Defenders of the faith."), a word I've never come across before.  Webster gives a more detailed definition of apologist:  "a person who defends or supports something (such as a religion, cause, or organization) that is being criticized or attacked by other people."  What an interesting term!  In sum, although the fill feels a bit esoteric in places, the well-researched and interesting theme makes this puzzle shine!  The answer grid (with highlighted theme entries) can be seen below. 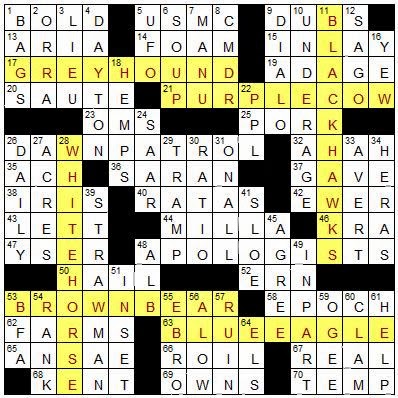 Today's featured pre-Shortzian entry, HOWGOZIT CURVE, originally appeared in the October 5, 1968, puzzle (constructor unknown), which was edited by Margaret Farrar and litzed by Martin Herbach.  This unusual term, which was clued as "Running graph of flight, in aviation parlance," has yet to be reused in a Shortz-era puzzle.  Webster defines a howgozit curve as "a running graph of the progress of an airplane flight involving the distance covered, fuel consumed, and time elapsed and enabling the pilot to determine the equitime point."  Webster also mentions that howgozit is an alteration of "how goes it?," which makes sense in theory but is never something I would've guessed.  "Howgozit curve" gets just 3,950 Google hits, which makes it quite an unusual entry.  Since I couldn't find any great pictures of a howgozit curve, below is a picture of a howgozit page:

Posted by David Steinberg at 6:40 PM