We've now litzed more than 15,600 puzzles—15,640, to be exact!  This week started off with 4 puzzles sent in by Denny Baker on Saturday morning.  Early Sunday morning, Todd Gross sent 10 proofread puzzles, then that afternoon Susan O'Brien sent 4 more litzed puzzles, putting us over the 15,600 mark!  Later that night, Denny sent in 4 more puzzles, which were followed by 4 from Lynn Feigenbaum Monday morning.  Then Tuesday morning, Barry Haldiman sent in 8 more puzzles; that afternoon, Todd sent 10 more proofread puzzles, which were followed by 4 more litzed puzzles from Susan.  Wednesday morning, Denny sent in another 4, and that afternoon, Susan sent 6 more.  Thursday night, Denny sent 4 more, and then early this morning, Lynn sent another 4.  And this week Howard Barkin sent in 8 puzzles.  Thanks so much again, everybody—great job!  I'm hoping we reach 15,700 on the litzing thermometer by next Friday!

We're in 1945 now, the year when World War II officially ended!  Germany's last major offensive, the Battle of the Bulge, started off the year, but Germany surrendered shortly thereafter, and Victory in Europe Day was celebrated on May 8.  A few months later, Japan surrendered, and Victory in Japan Day was celebrated on August 15.  I look forward to seeing all the war references that show up in these 1945 puzzles, but for now, here's a picture of celebration in Times Square after all the Axis powers had surrendered:


On the litzing front, we now have only 42 packets left to send out!  A good number of the puzzles in these packets (and in others that were recently sent out) contain—gasp!—two-letter words, which several litzers have commented on.  It would be interesting to know when exactly the rule prohibiting entries of less than three letters began.

Today's featured puzzle, which was published May 26, 1946, was constructed by Louis Baron, edited by Margaret Farrar, and litzed by Susan O'Brien.  This is one of the only pre-Shortzian puzzles I've seen that has left-right symmetry rather than standard rotational symmetry; if that's not unusual enough, the constructor decided to insert his name at 86-/88-Across, making this the earliest instance of a vanity puzzle I've encountered!  As is the case with most other vanity puzzles, LOUIS ("Any of several kings of France.") and BARON ("Member of British peerage.") are clued normally.  I really appreciate how Louis Baron added some spice to one of the gargantuan themeless Sundays published during the '40s; these puzzles can get a bit tedious to litz (and to look through) after a while, though I imagine this puzzle caused quite a stir with solvers who noticed that the constructor gave his name prime real estate in the grid.  It's too bad that all the anonymous Farrar daily puzzle constructors didn't sneak their names into their grids or clues!

Anyway, aside from its unusual features, this puzzle is jam-packed with entries that related to W.W. II or were quite contemporary in 1946.  These entries, many of which rarely show up in puzzles nowadays, include CYCLOTRONS ("Atom-smashing machines."), IMPERIALIST ("Empire-minded person."), OSMENA ("President pro tem of the Philippines."), IRAN ("'Hot spot' of oil disputes."), PROPAGANDA ("Biased news."), MILITARIZE ("Organize for war.), UNAMERICAN ("Unrepresentative of our democracy."), YAMAMOTO ("Jap naval chief, shot down over the Marshalls."), ALPINI ("Italian mountain troops."), MISSOURI ("Birthplace of Mr. Truman."), PALOOKA ("Tough fellow, in GI terms."), ANTIFASCISTS ("Opposers of dictators."), TRANSYLVANIA ("Much disputed European area."), HITLERITE ("Nazi."), DOOLITTLE ("Leader of first squadron to bomb Tokyo."), BOLSHEVIK ("Anti-capitalist revolutionary of 1918 Russia."), LEHMAN ("Ex-chief of UNRRA."), and BRADEN ("Asst. Secy of State for American Republic Affairs.").  Other highlights in the fill include CHAUVINISM (clued somewhat W.W. II-esque as "Excessive nationalism."), PHARISAICAL, HELLENISTIC, EXEGESIS, SPARERIBS, EPHEMERALS, CAPRICE, and BATHER (clued bizarrely as "Enjoyer of balneological pleasures.").  That's some fancy puzzle-making!

On the other hand, there are a fair number of uncommon entries, though not as many as I've seen in other 23x puzzles from the '40s.  These obscurities include SNA ("East Indian sheep, the nahoor."), GES ("Tapuyan Indians."), KETA ("Russian dog-salmon."), MOY ("Old corn measure, about 150 lbs."), NIATAS ("Dwarf cattle of South America."), STIRIOUS ("Consisting of icicles: Obs."), INI ("King of West Saxons: Var."), NIU ("Siamese length measure."), ATIU ("One of the Cook Islands."), SONNA ("Tradition-bound part of Mohammedan law: Var."), and OTER ("Man-otter victim of Loki: Norse.").  OTER struck me as so bizarre that I had to do some more research on it—I mean seriously, a man-otter?!  The story of Oter (also known as Otr), which comes from the infamous crosswordese Edda,  is actually quite fascinating.  In a nutshell, Oter was the dwarf son of King Hreidmar who had the power to take on any shape.  Oter particularly enjoyed assuming the form of an otter, and Loki accidentally killed him one day for his pelt.  King Hreidmar was outraged and demanded that Oter's skin be filled with yellow gold and coated with red gold!  The story goes on, but I'll spare you the details.  Here's the answer grid for this puzzle with highlighted vanity entries, along with a picture of Oter in dwarf form: 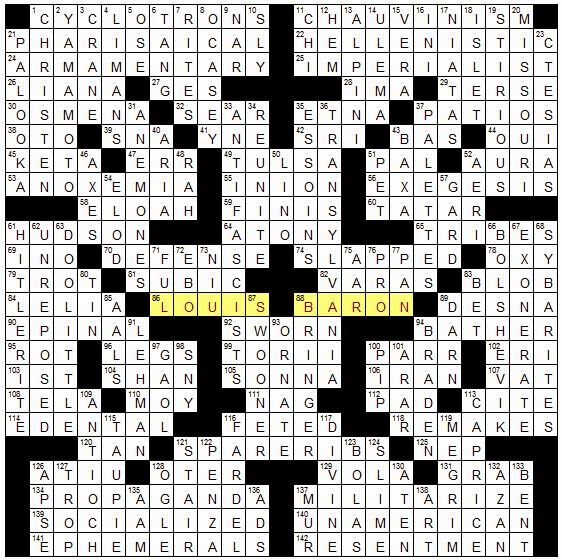 Posted by David Steinberg at 11:55 AM