Over 8,600, PRESHORTZIAN in a Grid, Martin Ashwood-Smith on "Dip," and Publicity

We've now litzed more than 8,600 puzzles!  On Thursday Jeffrey Krasnick sent in a batch that put us over this milestone, so we're now on our way to 8,700.  Great job, everybody!

A few days ago I received an e-mail from litzer Martin Ashwood-Smith about something he thought I'd enjoy seeing—it turned out to be a grid he'd built with PRESHORTZIAN at 1-Across!  I'm delighted to reproduce it for you below—thanks, Martin!  Maybe someday "pre-Shortzian" will indeed appear in the OED! ;) 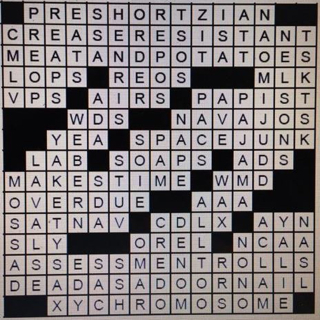 1. To plunge briefly into a liquid, as in order to wet, coat, or saturate.
2. To color or dye by immersing: dip Easter eggs.
3. To immerse (a sheep or other animal) in a disinfectant solution.
4. To form (a candle) by repeatedly immersing a wick in melted wax or tallow.
5. To galvanize or plate (metal) by immersion.
6. To scoop up by plunging the hand or a receptacle below the surface, as of a liquid; ladle: dip water out of a bucket.
7. To lower and raise (a flag) in salute.
8. To lower or drop (something) suddenly: dipped my head to avoid the branch.
9. Slang To pick the pockets of.
v.intr.

1. To plunge into water or other liquid and come out quickly.
2. To plunge the hand or a receptacle into liquid or a container, especially so as to take something up or out: I dipped into my pocket for some coins.
3. To withdraw a small amount from a fund: We dipped into our savings.
4. To drop down or sink out of sight suddenly: The sun dipped below the horizon.
5. To drop suddenly before climbing. Used of an aircraft.
6. To slope downward; decline: The road dipped.
7. To decline slightly and usually temporarily: Sales dipped after Christmas.
8. Geology To lie at an angle to the horizontal plane, as a rock stratum or vein.
9.

a. To read here and there at random; browse: dipping into Chaucer.
b. To investigate a subject superficially; dabble: dipped into psychology.
10. Slang To steal by picking pockets.
n.
1. A brief plunge or immersion, especially a quick swim.
2. A liquid into which something is dipped, as for dyeing or disinfecting.
3. A savory creamy mixture into which crackers, raw vegetables, or other foods may be dipped.
4. An amount taken up by dipping.
5. A container for dipping.
6. A candle made by repeated dipping in tallow or wax.
7. A downward slope; a decline.
8. A sharp downward course; a drop: a dip in prices.
9. Geology The downward inclination of a rock stratum or vein in reference to the plane of the horizon.
10.

a. Linguistics A part of a phrase or sentence that is unstressed or less strongly stressed relative to surrounding words, as the words I and to in I have to go.
b. Poetry The unstressed portion of a metrical foot.
11. Magnetic dip.
12. A hollow or depression.
13. Sports A gymnastic exercise on the parallel bars in which the body is lowered by bending the elbows until the chin reaches the level of the bars and then is raised by straightening the arms.
14. Slang A pickpocket.
15. Slang A foolish or stupid person.

The Pre-Shortzian Puzzle Project received some new publicity this week:  T Campbell linked to the site from Amy Reynaldo's Diary of a Crossword Fiend.  Thanks so much, T!

Today I'm featuring the two pre-Shortzian "vanity puzzles" I've seen so far in which the constructor incorporated part of his or her name into the grid.  The earlier of the two, published on September 20, 1976, was constructed by Jack L. Steinhardt, edited by Will Weng, and litzed by Doug Peterson.  The constructor cleverly masked STEINHARDT (clued as "Envoy to Russia under F.D.R.") in a repeated sound theme of STEIN.  Steinhardt also included the entry STEINBERG, which he clued as "Comedian or conductor."  The comedian's full name is actually David Steinberg—I'm flattered!  If only he had clued STEINBERG as "Comedian or constructor-to-be". . . .  The theme is a bit inconsistent in that BEER STEIN is the only theme entry that isn't a person; also, STEINBECKS ("Author John and family") feels a little weak.  The nonthematic fill, on the other hand, is quite solid—the only mystery entry I see is CERMET ("Heat-resistant alloy").  This puzzle is very clever for a vanity puzzle, and it gets major bonus points in my book for including the entry STEINBERG!  The answer grid (with highlighted theme entries) can be seen below: 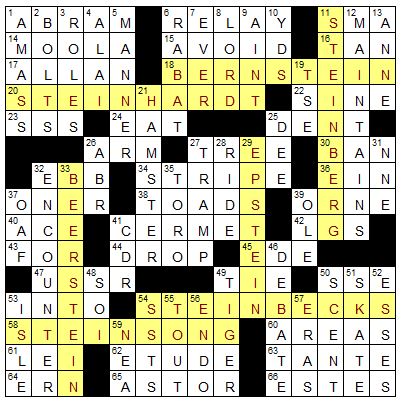 The second vanity puzzle, published on October 13, 1984, was constructed by Joe Clonick, edited by Eugene T. Maleska, and litzed by Andrew Feist.  Clonick cleverly split his name in the first two Across entries of this "themeless":  JOSEPH was clued as "Owner of a multicolored coat" and CLONIC (which was as close as Clonick could come to including his last name) was clued as "Spasmodic, as a muscle."  In addition, the constructor placed the entry VANITY ("Dressing table") symmetrical to CLONIC, which is how I came up with the term vanity puzzle in the first place.  The nonthematic fill feels decidedly more lively and contemporary than usual—I especially like the entries JANE DOE, MOLOTOV, JEDI, ICEBERG, and IMMINENT.  The JEDI clue, "They returned in a Lucas film," is particularly interesting—it was very unusual for a Maleska-era puzzle to reference current pop culture (Return of the Jedi came out just a year before this puzzle was published).  The clue "Rapper's article" for THA didn't exist yet (instead we get the more obscure clue "Fourth Arabic letter"), and admittedly, AURICLE ("Outer ear") and EVULSED ("Plucked forcibly") aren't the greatest.  Nevertheless, this is a very nice pre-Shortzian vanity puzzle.  The answer grid (with highlighted vanity entries) can be seen below: 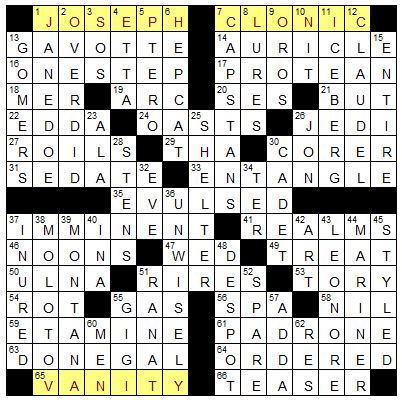 The most recent Margaret Farrar–edited Sunday puzzle I litzed, titled "For Global Strategists," was almost like a snapshot of the world on March 22, 1942.  The constructor, Alma Talley, packed in lots and lots of geography-related entries and clued them according to their influence on World War II.  She also included many general war-related clues.  Below is a selection of the more interesting of these clue/entry pairs:
That's a lot of 1942-related clues/entries!  I'm surprised that Margaret allowed the constructor to use both INDOCHINA and CHINA in the same puzzle.  Nevertheless, this list is quite impressive!  Below is a map that shows what territories that Axis powers occupied in 1942:

Posted by David Steinberg at 6:07 PM