Great news:  We've finally finished proofreading the 1977 puzzles, and Jim Horne has now posted them on XWord Info, where they can be viewed, solved, and analyzed.  This year contains the first two months of Will Weng–edited puzzles, so enjoy!  Thanks, Jim!

Incidentally, a couple of weeks ago I received an e-mail from Jim, who announced that he'd created a new feature that allows you to search for keywords in clues as well as entries!  This very useful feature recently allowed Will Shortz to quickly locate all crosswords with word ladder themes (by searching for "word ladder" in puzzle clues) to help a friend with a book.  Jim suggested that I do a similar clue search for "Stepquote," which turned up a surprising number of pre-Shortzian Stepquotes that weren't constructed by Eugene T. Maleska and, even more significant, that were confined to daily puzzle grids!  The clue search also makes researching how current events played into New York Times crosswords much easier.  I did a clue search for "U.S.S.R." and was able to see how crosswords reflected developments in and changing attitudes about the Cold War, which was truly fascinating!  I can't wait to explore the clue search in more detail—thanks so much again for creating it, Jim!

In other news, litzer and proofreader Todd Gross recently uncovered some very interesting articles. He found three on pre-Shortzian constructor James A. Brussel, who, in addition to being a crossword constructor, was also a psychiatrist and a criminologist who helped track down the Mad Bomber!  Todd also found two articles on Jordan S. Lasher, one of which erroneously listed him as Joseph Lasher!  On top of all this, Todd came across a fascinating early article on late crossword puzzle editor and ACPT judge Doug Heller.  Great finds, Todd!  Links to the articles about James A. Brussel and Jordan Lasher can be found on the Pre-Shortzian Constructors page.

This week I also received an e-mail from Barry Haldiman, who noticed that several of the 1940s puzzles he'd litzed disguised a "headline" in the top row!  Here are two he pointed out, along with the clues for each word in the headline.  Both puzzles were constructed by the legendary Jack Luzzatto:
Barry also observed that the March 4 puzzle contained the clue "Hitler's next title." for HERR and said he found it odd that Margaret Farrar hadn't steered the puzzles to be a diversion from the war news.  Even with the rampant war references, though, I can see how the puzzles would have been considered diversions—it's hard to think much about the war when many clues obligate you to pore through hefty tomes to get the name of one of the Azores Islands or of an obscure arrow poison!

A couple of days ago Jeff Chen of XWord Info forwarded an e-mail he had received from a solver who had been trying to find a couple of puzzles on XWord Info, one by Frances Hansen and the other by Maura B. Jacobson.  The solver's 200-puzzle omnibus of Maleska-edited puzzles indicated that these puzzles had all originally run between 1979 and 1985, yet he couldn't find them on XWord Info.  I was able to search through my data and find the exact dates for both puzzles, which had actually first appeared in 1976—the year we are currently proofreading.  The solver also wondered why some of the puzzles in his book had different titles than the ones on XWord Info.  I explained to him that puzzle titles, clues, and even grids were often changed in the versions that were reprinted in books and that, where possible, the litzed puzzles on XWord Info reproduced whatever was in the original puzzles, not in reprinted versions later on.  It was gratifying to be able to find the Hansen and Jacobson puzzles quickly for this solver and was yet another instance of the Pre-Shortzian Puzzle Project being able to serve as a resource for the community at large.

On Saturday while I was at the Latin convention, I received an e-mail from Roy Leban of Puzzazz.  Roy is very busy but wanted to digitize at least one puzzle before we were through.  I took one puzzle out of a packet and sent it to him, along with instructions.  Even though one puzzle may not seem like much (especially, as Roy noted, when compared to Mark Diehl's litzing achievement!), it still helps a lot.  Welcome, Roy!

I got to thinking that other people in the crossword community who've been too busy to litz might be interested in trying one puzzle too before we're all done, so I'm officially launching the One-Puzzle Litzing Challenge!  If you'd like to digitize one puzzle to see what it's like and help along the project, just let me know.  If you end up liking it, you can always ask for more puzzles, but if one is enough, that's fine too!

Today's featured pre-Shortzian puzzle was published on March 3, 1964; constructed by Diana Sessions; edited by Margaret Farrar; and litzed by Tracy Bennett.  This impressive construction features a five-part Space Age theme in a 70-word grid!  The theme consists of five asymmetrically arranged entries containing a planet (or what was considered a planet at the time this puzzle was published), most of which are clued in a way that doesn't relate to the planet in question.  Thus, this puzzle's constructor largely passed on entries that would directly reference the planets (such as SATURN'S RINGS and NEPTUNE'S MOON) in favor of ones that would more subtly reference them (such as SATURNINELY and NEPTUNE'S CUP).  My favorite theme entry is EARTH MAN, which was clued as "Future moon visitor."  Talk about an optimistic outlook!  What really makes this puzzle stand out, however, is the cleanliness of the nonthematic fill, given the open grid and constraints imposed by the theme.  I particularly like the entries PRANCES, NEPHEW, MOSCOW, SPEAK UP, PRALINE, YOSEMITE, and PUPPET—that's a lot of fun fill!  UNITO (clued as "Joined: It."), UNIOS ("Fresh-water mussels."), and MUR ("Wall: Fr.") are the only real trade-offs, making this pre-Shortzian puzzle very successful in my books!  I look forward to seeing what other masterpieces Diana Sessions has in store as I continue to review packets sent in by litzers.  I've already seen a few Sundays by her that have amazingly open centers and unusually clean fill, such as this one from 1983!  For now, here's the solution to this week's featured puzzle: 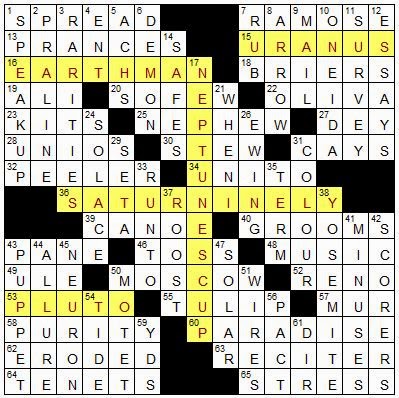 Posted by David Steinberg at 5:55 PM