One-Puzzle Litzing Challenge, Only 6 Packets Left, Over 15,800, Done with 1943, In 1942 (the Final Year!), Fireball Fortnightly News Crosswords, and Funny Typos

The One-Puzzle Litzing Challenge has gotten off to a great start, thanks to Jim Horne of XWord Info, who was the first to respond and who then wrote about his experience on Cruciverb-l!  Others who have accepted the challenge or inquired about it include Michael Blake, Jeff Chen, Emily Cox, Jon Delfin, Patrick Merrell, Cory Oldweiler, Spencer Pasero, Henry Rathvon, Andrew Reynolds, Mel Rosen, Stephanie Spadaccini, Finn Vigeland, Larry Wasser, and Bryan Young—thanks so much, everybody!  If you own Crossword Compiler, Crossdown, or CrossFire and would like to litz a puzzle before we're through with the last six packets, e-mail me and I'll send you everything you need.  Depending on your typing speed, litzing one 23 x 23 Sunday puzzle takes approximately 20 minutes, and there's no rush, since the puzzles are from 1942 and we're currently proofreading puzzles from 1976!  If you didn't see Jim's clever quote (slightly modified!) from Henry V, here it is:


We few, we happy few, we band of litzers;
For he to-day that digitizes with me
Shall be a litzer; be he ne'er so vile,
This task shall gentle his condition:
And gentlemen in U. S. now a-bed
Shall think themselves accursed they were not here,
And hold their manhoods cheap whiles any speaks
That worked with us upon PSPP.

It's been another busy week on the litzing front, starting off with 7 puzzles from Tom Pepper on Saturday morning and 1 from new litzer Jim Horne.  Sunday morning, Jim sent 3 more, and Todd Gross sent 10 proofread puzzles.  Monday evening, Jim sent 6 more puzzles, and then Tuesday afternoon, Susan O'Brien sent 4 more.  Wednesday morning, Jeffrey Krasnick sent in 4, which were followed by 8 from Barry Haldiman and 1 each from new litzers Michael Blake, Patrick Merrell, and Kristena Bergen.  That afternoon, Ralph Bunker sent in a whopping 28 puzzles, putting us over 15,800 on the litzing thermometer, and then Denny Baker sent 4 more!  Thursday morning, Denny sent another 4, putting his total at more than 900 litzed puzzles—congratulations, Denny!  A short while later, new litzer Larry Wasser sent in 1 puzzle.  Friday morning, Lynn Feigenbaum sent 2 puzzles, which were followed by 10 more proofread puzzles from Todd that afternoon.  We're now at 15,822 on the litzing thermometer—awesome job, everyone, and thanks so much again!

We whizzed through 1943 and are now in 1942—the final year of pre-Shortzian puzzles! One of the most noteworthy events of 1943 was Britain's development of Colossus Mark 1 to break German encryption.  According to Wikipedia, Colossus Mark 1 was the first electronic digital computer that was programmable.  Here's a picture of an improved version of the Colossus Mark 1 (not surprisingly, the Colossus Mark 2!):


And although many historical and cultural events occurred in 1942, none was more important—at least to the Pre-Shortzian Puzzle Project—than the publication of the first crossword puzzle in The New York Times on February 15, 1942!  This 23 x 23 puzzle, "Headlines and Footnotes," was constructed by Charles Erlenkotter.  Below is a picture of its filled-in grid; the blank grid appears on the sides of this Web site and on the original Pre-Shortzian Puzzle Project T-shirt! 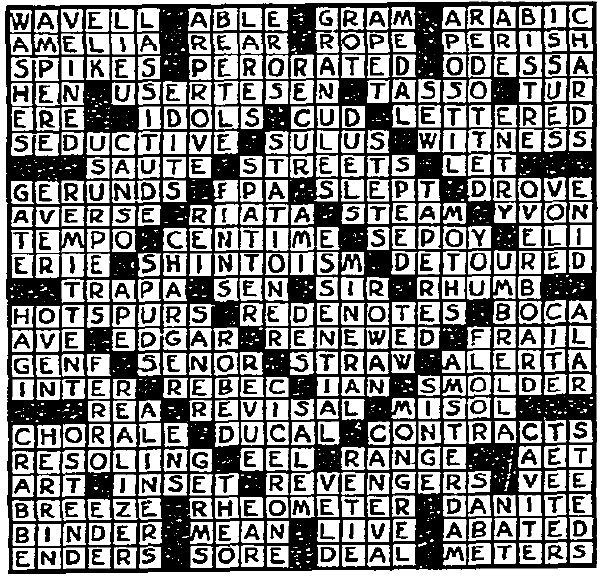 As I've mentioned previously, the puzzles from the 1940s contained a great deal of news and are particularly interesting from a historical standpoint.  And in 2014, we may actually have a parallel to these puzzles:  Peter Gordon's Fireball Fortnightly News Crosswords!  Some of you may have tried his previous Fireball Newsweekly Crosswords; these Fortnightly News Crosswords will be in the same vein but appear once every two weeks.  Peter is running another Kickstarter campaign to fund this endeavor, with a $1 minimum pledge or $6 minimum to receive the crosswords.  I'm looking forward to more of these "topical" (as Farrar would say) puzzles!  If you'd like to help back Peter's project too, click here.

I decided to choose a crossword from 1976, the year that's currently being proofread, for this week's featured puzzle.  "Free Thinking" was published on July 4, 1976; constructed by Anne Fox; edited by Will Weng; litzed by Barry Haldiman or one of his former team of litzers; and recently proofread by Todd Gross.  At 27 x 27, this gargantuan construction is the largest square crossword ever published by The New York Times!  The puzzle appeared on the bicentennial of the day the Declaration of Independence was ratified, and it's jam-packed with symmetrically interlocking patriotic theme entries.  The puzzle was printed with an inspirational Ben Franklin quote, "Games lubricate the body and the mind.," underneath the title, a feature I've never seen before in any other crossword!  The theme entries themselves are snippets from famous American quotes and folklore, and all but two of them are more than 20 letters long.  Getting seven such lengthy across theme entries (along with THEE I SING and LEXINGTON, to boot!) would have made for a perfectly good pre-Shortzian puzzle, but Anne Fox must not have been satisfied:  She symmetrically arranged her theme entries so they would cross the 25-letter reveal THIS DAY TWO HUNDRED YEARS AGO.  Once again, Anne Fox's mastery of interlock and grid design without the assistance of computer software blows me away!

The one theme entry that feels a bit unnatural is HUNDRED PENNSYLVANIA AVENUE (clued as "Sixteen ___"), which, in addition to not being able to stand on its own as well as the others, is typically represented numerically (as 1600 Pennsylvania Avenue rather than Sixteen Hundred Pennsylvania Avenue).  Nevertheless, this puzzle's theme and grid really sparkle in my book!  The nonthematic fill also has an unusually high number of fun, colloquial entries, including YOO-HOO, OH YEAH, HOT WATER, GOOD GRAVY, TINKLY, CHARLES I, HOUND DOG, HIDE-OUT, CEASE FIRE, and GLOW WORM.  I like how CEASE FIRE can be thought of as a quasi-theme entry, and I immediately thought of the Pilgrims, who arrived in America nearly two centuries before the Declaration of Independence, when I saw the entry GOOD GRAVY!  The puzzle does have its share of less-common and/or forced DUDS (98-Across), such as MAMO (clued as "Hawaiian bird."), ADAI ("Louisiana Indian"), TAC TOE ("Tic ___"), TEAGUE ("Texas city"), ETAH ("Greenland base"), PHARO ("___ fig [sycamore of Egypt]"), ZORIL ("African skunk"—a real stinker!), and ANIMI ("Resin: Var."), but they're few and far between and don't really jump out at me.  So in all, the fun, fresh entries far outweigh the less desirable ones in this puzzle.  As for the clues, most are pretty standard, though quite a few have a twisty Weng-esque feel to them that makes the puzzle seem significantly less fusty.  My favorites are "No thing for three" for MATCH, "Chess crisis" for MATE, "Old school item" for TIE, and "Egyptian under wraps" for MUMMY.

It was a pleasure coming across another lovely Anne Fox construction, and I look forward to seeing how awesome this 27 x 27 puzzle will eventually look on XWord Info!  For now, here's the answer grid (with highlighted theme entries): 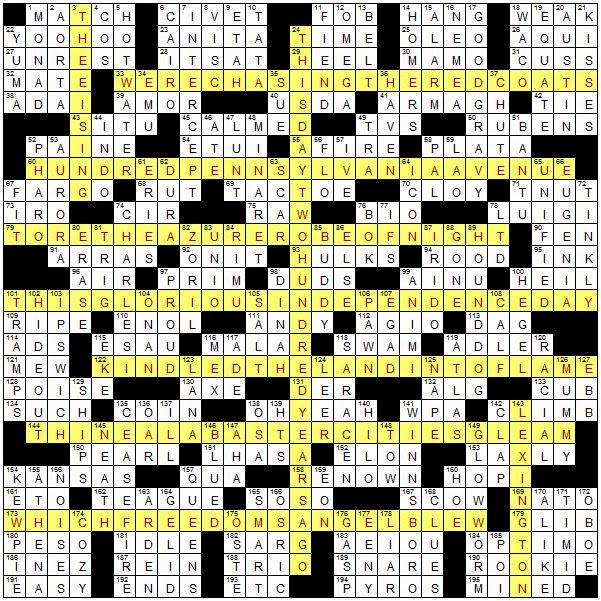 On the subject of proofreading, here are 10 more funny typos from the Pre-Shortzian Puzzle Project's growing collection:
My favorite of these typos is the one for RAVE, since I can tell that the litzer thought he or she was transcribing a clue for RAVEN!  Quoth the David "Nevermore"!

Posted by David Steinberg at 5:48 PM