This week I'm delighted to present an interview with pre-Shortzian and Shortz-era constructor Jeffrey Wechsler!  Jeffrey recalls publishing three puzzles in the Weng era, though because of missing bylines, only one of them has been identified:  his July 17, 1969, themeless, which I'm featuring in today's post (see below).  This puzzle was published the day after the July 16 Apollo 11 moon mission launch, and since next week marks the 45th anniversary of that launch, I'm especially pleased to be able to publish Jeffrey's interview at such an opportune time!  To read more about Jeffrey and his remarkable return to constructing after a 40-year hiatus, click here or on the Pre-Shortzian Constructor Interviews tab above.

Also, as the note at the top of today's post says, the blog will be on hiatus for the next two weeks.  Litzers and proofreaders can continue to send in and request puzzle packets as usual, though there may be occasional delays in responding.  Among other things, I'll be attending the National Puzzlers' League convention in Maine, which promises to be an awesome four days (and nights!) of nonstop puzzling—I hope to see some of you there!

Recently I received an e-mail from Jim Horne about some discoveries he'd made while looking through the Pre-Shortzian Puzzle Project database:

One of the most fun things about PSPP is that it shows many of the common tricks predate Shortz’s stewardship.  Take, for example, one of Jeff Chen’s favorite tricks — repeated answer words.  I added the pre-Shortz puzzles with repeated words here.

Some of these are presumably unintentional, like ANON in this one.

This one is clearly intentional and shows a fun coincidence.

This one is intentional and has an amazing 53 blocks for no apparent reason.  Nobody seemed to have qualms about Biblical quotes back then—of course everyone would know them!

This one seem unintentional but look!  The answer RESIN appears at 42 Across and at 65 Across, and the word Resin appears in the clue for 56 Down!!!  [Ed. note:  The litzed puzzle Jim was referring to contained a grid mistake; 65-Across  was supposed to have been RESEN.  A corrected copy of the puzzle has been sent to XWord Info.]

Really interesting, Jim—thanks so much for pointing all of these out!

Jim sent me some more observations and updates later:

I created a new page to track pangrams organized by constructor.  It's the first page I've written that is constructor-focused and combines pre-Shortz and Shortz-era constructors.  This is always iffy because the pre-Shortz data is sketchy in some cases, but this one is dramatic enough that I thought it would be interesting. 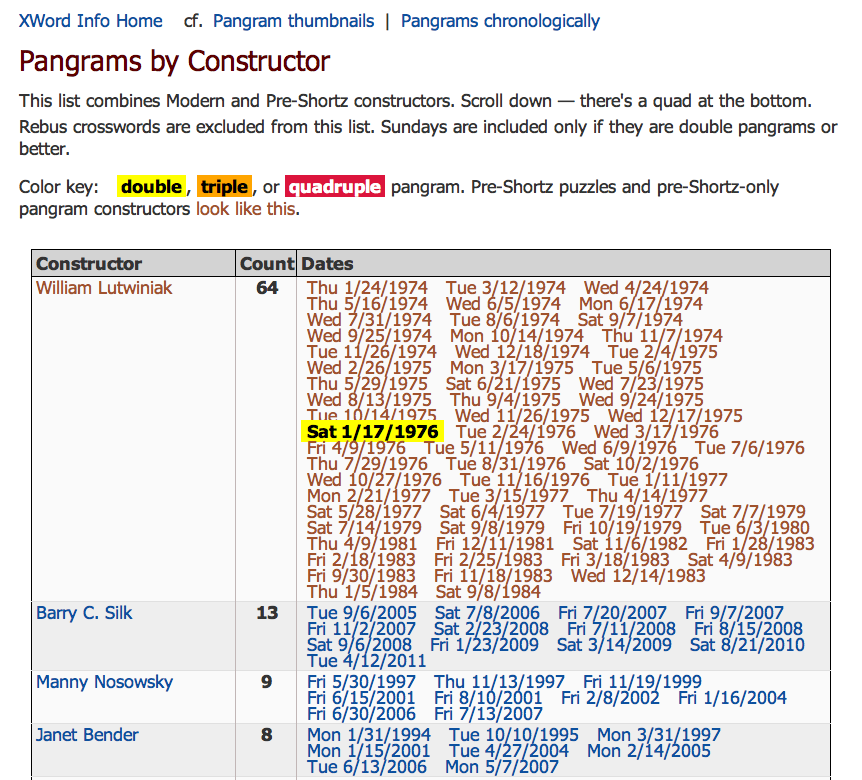 I thought I'd mention another observation.  A commenter on Amy's blog mentioned that there was a pre-Shortz double-pangram on a Sunday.  In fact there were three.  (There are no Shortz-era double-pangram Sundays.)

In my pangram pages, I excluded Sundays (because the extra squares makes the feat less impressive) and rebus puzzles (because how do you even count those?).

I've changed that to include Sundays if they are double-pangrams or better.

The two pages on XWord Info show pangram data by date or by constructor (or this one to jump right to the older puzzles).

And the new one by constructor with modern and old constructors intermixed.

Thanks so much again, Jim, for all these great pages and observations!

Litzer, proofreader, and researcher/historian Todd Gross took some time recently to reflect on what inspires people to construct crosswords and wrote this thought-provoking piece:

I for one find it really fascinating (and more than a little humbling) how accomplished several constructors have been in other areas of life.  Especially when, like Tanaquil Le Clercq (think someone might use that name in a puzzle some day?—very scrabbly, and splits into two equal parts), it's in an area that would seem totally unrelated to crossword creation.  I'm motivated by trying to figure out the kind of people that would go to all the trouble of learning such an arcane craft that, for most people, doesn't pay well enough to even eke a living at, much less a really good living.  One would think many of these folk would try writing songs or screenplays instead, which can pay much better and give you a much wider sort of fame.

Also, puzzle creation doesn't seem to run much in families.  And, until fairly recently, nearly everyone who created crosswords did so alone, probably most learning their craft from editors' comments (where now there are books and all sorts of possibilities for feedback via the Internet).  So it's a lonely sort of craft, easy to fail at, takes lots of effort, and often offers little in the way of fame or financial reward.  Yet all kinds of folk were still driven to do it.  Not just once or twice to see their name in the paper, but as a kind of ongoing obsession.

In my case, it's a chance for me to use my creative and analytic sides to create something that (if published) may be enjoyed by millions of folk.  That's just amazing to me, as a guy who can't hold even a basic sort of job.  Sinbad the comedian once said that being a comic was really the only thing he could do for a living; I feel kind of similar about puzzles.  I'm lucky I don't need to make a living at this, and really lucky there's a kind of community where I can join with like-minded folk and feel like I belong.  Here in the middle of the desert, not so much.

So I'll keep at this maddening obsession, even putting up with all the rejections I get, as long as I feel there's an audience out there that likes what I make.  And hey, even a little money helps when I can get it.

Sorry I rambled so long, but we folk who are really interested in crossword history are an even more arcane bunch than puzzle creators, methinks.

Thanks again, Todd, for these enGROSSing reflections!

Now for some more about Jeffrey Wechsler's Weng-edited debut puzzle from July 17, 1969!  Even though the puzzle has 48 blocks, which is more than we would typically see nowadays, that Jeffrey was able to keep the word count down to 72 is impressive.  I've seen innumerable themelesses from the '60s with 74, 76, and even 78 words that are chock-full of lively fill and are relatively clean, but it's rare to see these measures of quality in a pre-Shortzian themeless from this time period.  And Jeffrey definitely had (and still has) a knack for crossing fun entries without including too many iffy shorter ones—some of my favorites in this puzzle include HEINOUS, INFERNO, HERE'S TO YOU, MELODRAMA, FAIRIES, and CARAMEL!  The only entry that would probably cause today's solvers to raise an eyebrow is SPET, a piece of primarily pre-Shortzian crosswordese that was traditionally clued as "Small barracuda."  In sum, Jeffrey did an excellent job at constructing a puzzle that stands the test of nearly 50 years!  I hope he'll be able to identify more of his puzzles once they're on XWord Info; for now, though, I'll keep watching for his byline in The New York Times and the Los Angeles Times!  Here's the answer grid for today's featured puzzle: 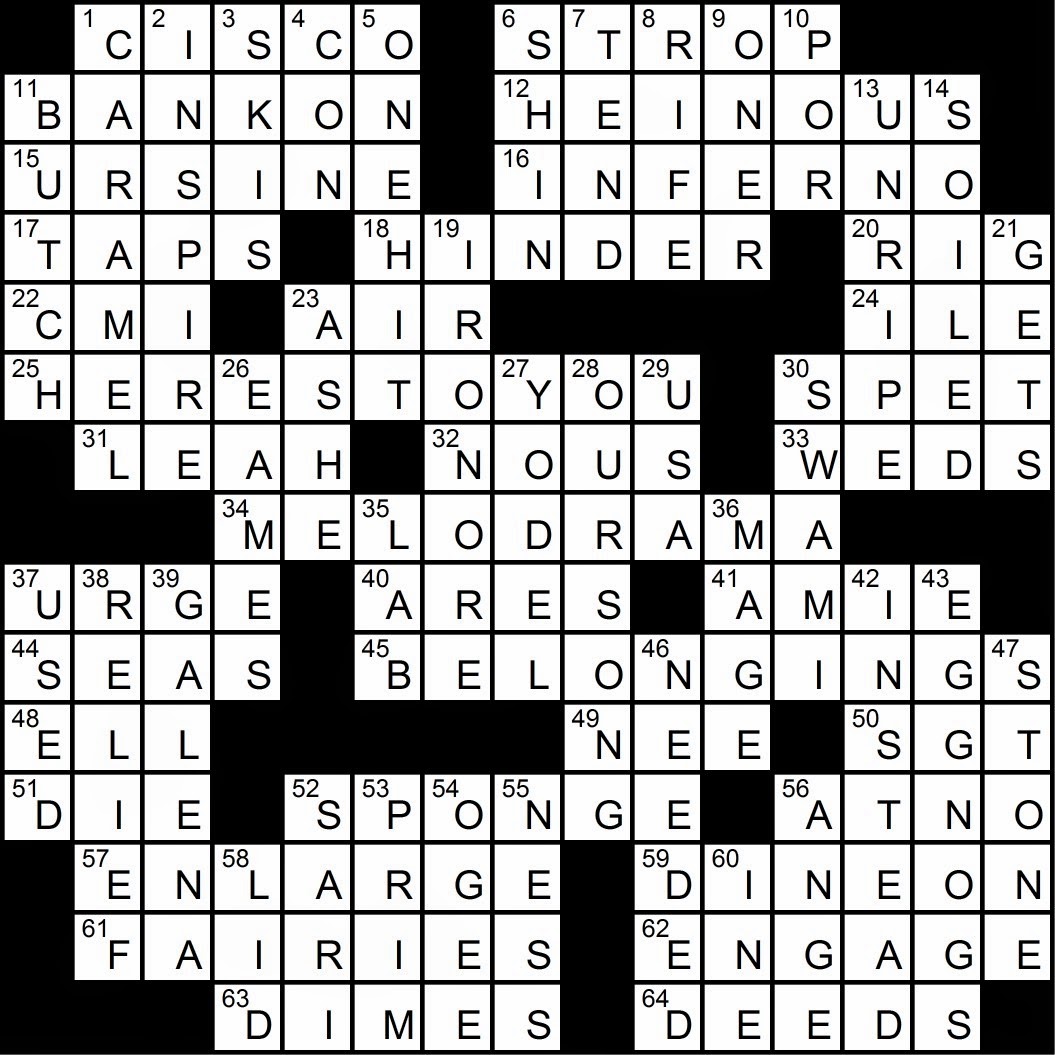 Posted by David Steinberg at 12:26 PM