East Coast Wrap-Up, August Litzer of the Month Peter Broda, and Greek Entries of the Week

I've just returned from an amazing couple of weeks on the East Coast, where I spent four awesome days and nights in Portland, Maine, at MaineCon, the National Puzzlers' League convention!  I had a blast playing Bananagrams and Fluxx at midnight, meeting new NPLers and reuniting with old friends, trying new games such as Cluesome and Paperback, solving a brilliant Extravaganza with an equally brilliant team of runners, and exploring some of Portland's lovely restaurants!  On one of the days, I went to lunch with Stan Newman (a.k.a. Famulus) at a place that served sapid lobster pizza and other seafood treats; when we got back to the hotel, Stan gave me two references books that were used by many pre-Shortzian constructors:  the Longman Crossword Key and Funk & Wagnalls Crossword Puzzle Word Finder.  Both of these tomes are full of possible crossword entries sorted by letter pattern; the main differences are that the Funk & Wagnalls includes 2–6 letter words (whereas the Longman Crossword Key includes 3–15 letter words) and that the Funk & Wagnalls allows you to find words with more than one fixed letter.  The Funk & Wagnalls is particularly interesting since it describes a deliberate process for how words were selected for inclusion in the book, which has definite connections to modern-day word-list scoring.  Thanks again for these neat old references, Stan!

I was also delighted to have lunch in Philadelphia with Bernice Gordon, who has become my "adopted grandmother" of sorts!  She showed me some of her more recent constructions, and we had a lot of fun playing a game called Bookworm on her computer (which can be played online).  Bernice also gave me several beautiful books, a couple of which she bought in England years ago!  My favorite of these books, An Exaltation of Larks, contains the names for different groupings of people and animals, such as "a siege of herons" and "an untruth of summoners."  The book also has lovely illustrations to accompany many of the terms and etymological information about some of the more esoteric ones.  I look forward to looking through Bernice's books in more detail when time frees up and jet lag fully wears off! 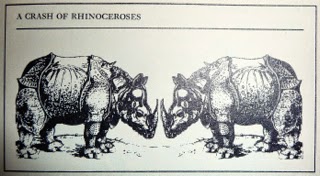 I also spent a few days in Pleasantville, New York, where Will Shortz generously made his crossword book and magazine collection available.  Using his complete collection of Simon & Schuster volumes, along with countless other contemporary puzzle books, I was able to identify the first names and/or genders of many more pre-Shortzian constructors.  One of the most interesting discoveries I made was that Horiguchi (whose first name turned out to be Yurie) submitted her crosswords to the Times from Tokyo.  I wonder if English was Yurie Horiguchi's first language—if not, then her ability to construct quality American-style crosswords by hand is even more impressive!  Will also gave me a few extra copies of The Bantam Great Masters Winning Crossword Puzzles series, which has photos and bios of numerous pre-Shortzian constructors, and let me photocopy more extensive bios of certain puzzlers from his Four-Star Puzzler anthology.  I'm planning to scan these in the near future and make them available on Scribd.  Will and his assistant, Joel Fagliano, also gave me a fascinating behind-the-scenes look at how New York Times puzzles are selected and edited, although I spent most of my time conducting research.  Thanks so much again for the books and for letting me do some great research, Will!

Finally, right before touring the college renowned in crosswords for calling its students ELIS, I was able to pay a visit to Noah Webster's grave—here's a picture:

Now that we're in August, we have a new Litzer of the Month—Peter Broda!  Peter is a New York Times constructor who hails from Regina in the Canadian province of Saskatchewan.  To read more about him, click here or on the Litzer of the Month tab above.

Today's featured puzzle, "Fabrication," was constructed by Diana Sessions; published August 26, 1962; edited by Margaret Farrar; and litzed by Mike Buckley.  This 21 x 21 tour-de-force features 16 symmetrical theme entries that contain a type of fabric, such as WOOL GATHERER (clued as "Idle fancier.").  All the theme entries are elegantly arranged in either stacks of two or, in the center, mind-boggling interlocking webs; to top off the eye-pleasing gridwork, the constructor mostly included theme entries that don't directly tie into the types of fabric they contain!  My favorite theme entry is LAME DUCK ("Act of 1933."), which completely disguises its original fabric, lamé, though FLANNEL CAKE ("Menu item.") and CREPE PAPER ("Party decoration.") are close runners-up.  Cramming in 16 stacked and interlocking theme entries is no easy task, but the constructor made it look like a piece of cake by producing such a consistently smooth fill!  The central entry, SCARFED, is a lovely touch that subtly gets at the theme, and entries like CHARCOAL, CHAPLIN, and WALRUS add a nice bit of zest to this puzzle's 146-word grid.  Speaking of 146 words, I really appreciate that the constructor opted for a word count slightly above the modern New York Times limit of 140 rather than throwing in some lengthy partials and additional obscurities in a more open grid.  I don't see any pairs of black squares that would have been particularly easy to remove, and the grid certainly doesn't feel chunky and sectioned off as a result of the higher word count.  Most of the less-than-stellar entries that did wend their way into the grid appeared in numerous other pre-Shortzian puzzles—the only one that really irks me is BTS ("British titles: Abbr."), but this entry too was used as recently as the Maleska era.  I much prefer the way old Los Angeles Times and Merl Reagle puzzles treated BTS (by cluing it as the abbreviation for boats and beats, respectively).  In all, this is a standout pre-Shortzian puzzle, and I look forward to seeing more from Diana Sessions as I slowly make my way through litzed packets!  Below is the answer grid with highlighted theme entries: 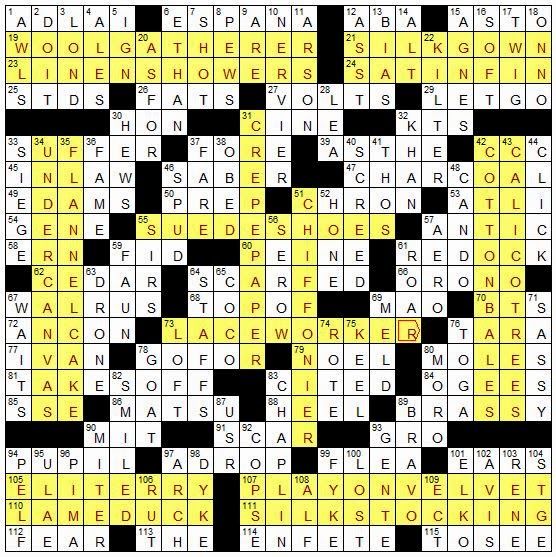 Entries of the Week

The July 22, 1962, crossword, "All Greek to Me" by Jules Arensberg, contained scads of unusual words purportedly from Greek as theme entries.  I've listed an ennead of my favorites below:
I knew the word deipnosophist from a previous entry of the week and ucalegon from hearing Will Shortz list it as his favorite word so many times, but the rest of these were new to me.  The two words on this list that intrigued me the most were gyascutus and Chichevache—here are some beautiful pictures of these two imaginary beasts I found on DeviantArt!

Posted by David Steinberg at 2:20 PM