Great news:  The 1967 puzzles are now up on XWord Info!  To see them, click here—thanks again to Jim Horne for posting them!  We've now proofread 27 years of puzzles, and as the Proofing Progress calendar in the sidebar shows, we're more than halfway done—great job, everyone!

It's been another busy week, starting off on Sunday morning with 31 puzzles from Mark Diehl in which he found 61 mistakes; that night he sent 30 more with 56 mistakes.  Tuesday afternoon Denny Baker sent in 23 puzzles, which were followed by 22 from Dave Phillips that night.  Thursday afternoon Dave sent 6 more, and then 5 with 8 mistakes came in from an anonymous proofreader.  That night Mark sent 31 more with 57 mistakes, putting him at more than 2,000 found mistakes—congratulations, Mark!  Early Friday morning Todd Gross sent in 10 with 14 mistakes; he also sent this very apropos screen capture of some clues from the May 5, 1966, PDF—note the appearance of the 9-Down clue, "Twist out of shape," which was for the entry DISTORT!

Thanks, Todd—and thanks so much again, everyone, for all the puzzles!

Blast! from the Past and Vocabulary Quiz

Last week's Blast! from the Past challenge had no correct answers—I'm obviously going to have to write better hints!  The clue, from a 1960 crossword, was:  "New international symbol."  The hint:  "The first word is 3 letters long, the second is 4 letters, and the third is 8."  The answer was . . . THE UGLY AMERICAN.  Hmm!

This week's Blast! challenge, which appears in the sidebar, should be a bit easier!

The 1960 Vocabulary Quiz from last week also must have been too hard, because no one posted their scores.  I guess words like chassepot, topepo, and avadavat aren't in the toolboxes of even the most avid puzzlers!

This week's featured puzzle, "Edited for Television," was constructed by Frances Hansen; published September 8, 1974; edited by Will Weng; litzed by Barry Haldiman; and proofread by Mark Diehl.  (Since the 1974 puzzles have been proofread, you can solve the featured puzzle on XWord Info before reading on.)  This 23 x 23 by the queen of limericks and other twisty tricks contains a rather unusual gimmick:  replacing hell and damn with bleep, as if the puzzle were being censored for television.  Thus, Admiral Farragut's famous line, "Damn the torpedoes," becomes BLEEP THE TORPEDOES, and the expression "When hell freezes over" becomes WHEN BLEEP FREEZES OVER.  I find it fascinating that a theme like this would be published in the 1970s, a tumultuous time known for things far more "offensive" than the mild oaths hell and damn!  Then again, even these days, most newspaper crossword puzzles tend to avoid potentially offensive references much more than, say, song lyrics do!  As for the puzzle itself, I appreciate the number of theme entries Frances squeezed in, and getting BLEEP YANKEES to cross three theme entries must have been no easy feat.  I do wish that 80-Down could have been tied into the theme somehow—I guess one could make a case for this entry subtly implying that each theme entry is more ELEGANTLY PUT than its offensive original form, though I would have preferred a more direct thematic tie-in.  I also feel the puzzle would have been more elegant if all the theme entries had demonstrated actual censorship rather than some demonstrating actual and others artificial censorship.  In other words, the theme could have been tighter without entries such as CLAMSBLEEP that replace a hidden hell with BLEEP, forming gibberish in the process.  Nevertheless, I enjoyed seeing such a creative theme; if Frances were still alive, she certainly would have been within her rights to say "My dear, I don't give a bleep!" to my minor criticisms!  The nonthematic fill also has a handful of strong entries—in addition to the provocative, lively SLIT SKIRT (clued as "Drafty dress feature"), Frances gives us OPAQUE, IMMOLATES, COURTYARD, TRYG VELIE (great name!), DABBLE, OH DEAR, and SIESTA.  On the not-so-sparkly side, there are a few more partial phrases and foreign words than would be ideal, and a sizable handful of the short entries, such as RASAS ("Hindu dances"), PURRE ("___ maw [roseate tern]"), and WALER ("Australian horse"), seem quite obscure.  One particularly unconventional three-letter entry, KOM ("Afo-A-___ [stolen statue]"), has a fascinating back story.  According to Wikipedia, the Afo-A-Kom statue, which is sacred to the Kom people of Cameroon, was stolen and sold to a U.S. art dealer in the late 1960s; after purportedly wreaking havoc on its new owner, the statue ended up in a Manhattan art gallery before ultimately being returned to its place of origin.  How many three-letter entries have a tale like this to tell?!  In all, although this puzzle has some slight inconsistencies and a handful of unsavory shorter entries, I admire its ingenuity and novelty.  I look forward to featuring more of Frances's puzzles on this blog in the upcoming months!  This week's featured puzzle can be viewed on XWord Info in its complete form; as usual, the answer grid (with highlighted theme entries) can be seen below: 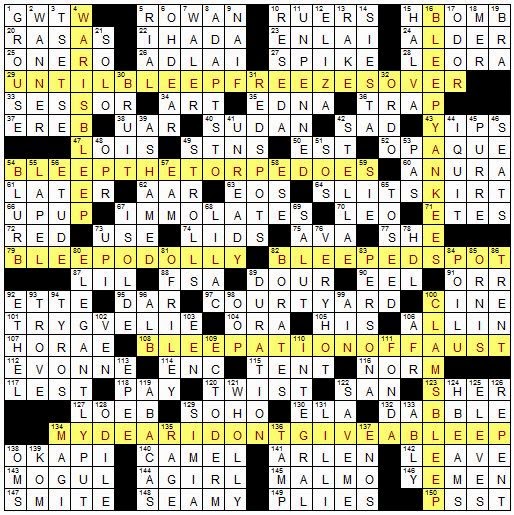 When I review litzed puzzles, I'm always on the lookout for particularly interesting and/or timely clues.  Most pre-Shortzian crossword clues are straight definitions, but every once in a while, something catches my eye!  Below is a list of clue/answer pairs from December 1960 (litzed by Ralph Bunker and proofread by Mark Diehl) that piqued my interest.  Only the December 25 constructor (Eva Taub Pollack) is known.

My favorite of these is the December 28 clue, the "perhaps obsolete" part of which intrigues me!  Even nowadays, spaceships are symbolically futuristic.  Here's a picture of a spaceship:

Posted by David Steinberg at 7:35 PM