Mark Diehl Sends First Correct Blast! from the Past Guess

Mark Diehl was the first to submit a correct guess to the new Blast! from the Past feature—congratulations, Mark!  Mark sent in his answer on Sunday, November 2, at 8:08 p.m.  The question was:  "Guess the 11-letter answer to this pre-Shortzian clue from 1960:  What U.S. needs more of."  The hint:  "The answer contains a single vowel (O) used 4 times."  And the answer (drumroll!) . . . SCHOOLROOMS!  Obviously a different time in history.

If you were stumped last week, try this week's Blast! challenge, which you'll find in the sidebar beneath the "Subscribe" buttons!

Things have slowed down a bit in the aftermath of the Pre-Shortzian Proofreading Challenge—I'm guessing everyone is taking a much-needed break!  But we've still made good progress this week, and I'm hoping to receive the last of the 1967 puzzles in time to have them up on XWord Info by next Friday.  Sunday night Mark Diehl sent in 28 puzzles with 41 mistakes.  Early Wednesday morning Denny Baker sent in 27 proofread puzzles, and then that night, Mark sent 31 more puzzles with 50 mistakes.

This week's featured puzzle, whose constructor is unknown, was published December 24, 1960; edited by Margaret Farrar; litzed by Ralph Bunker; and will be proofread by Mark Diehl.  All eight of Santa's reindeer are hidden in this puzzle's 72-word grid; as a bonus, the constructor included the reveal SANTA and the entry CARIBOU (clued as "Reindeer.").  Rather than simply cluing the reindeer as "Reindeer.," the constructor cleverly found alternate definitions for each of their names—for example, VIXEN is clued as "Shrew," and COMET is clued as "Orbiting object."  The most interesting reindeer name clues are "Flash with lightning: Ger." and "Thunder: Dutch." for BLITZEN and DONDER, respectively.  I knew that BLITZEN had something to do with lightning, but DONDER was completely new to me.  Where there's lightning, there's thunder!  Elsewhere in the fill, I really appreciated seeing the wintry entries YULES, FROSTY, and SUGARY, along with the nonseasonal (but still lively) DULCIMER, CARACAS, CATBIRD, TANNERY, HAZINESS, and FROTH.  That's a lot of fresh fill for a puzzle that's already jam-packed with theme entries!  Further, I'm amazed that this puzzle is more cleanly filled than many contemporary 72-word themelesses—the only entries that mystified me were TECO ("Pre-conquest Mexican Indian."), CERRIS ("Turkey oak of southern Europe."), NOA ("Not taboo, in Hawaii.), and LABRET ("Lip ornament of primitive tribes.").  Of these unusual clues/entries, LABRET interested me most; that a labret would be a lip ornament makes sense, since the Latin word for lip is labrum, but what would such an ornament look like?  And isn't referring to a tribe as primitive (or even pre-conquest) derogatory?  In seeking the answer to the first question, I looked up labret in Merriam-Webster, which gave me the definition "an ornament worn in the perforation of the lip."  Google Images suggested that the term labret now refers to a certain body piercing consisting of balls on either end of a rod that goes through the lip, which is kind of creepy!  I wasn't able to dig up a lot of information on what a traditional labret looked like, though it appears to have been much more conspicuous than what we see today.  In sum, this is an exceptional pre-Shortzian puzzle, both in terms of theme and grid!  I hope some of the daily puzzles from the '50s that I haven't looked through yet have equally comprehensive themes and strong executions.  In the meantime, here's this puzzle's solution grid (with highlighted theme entries): 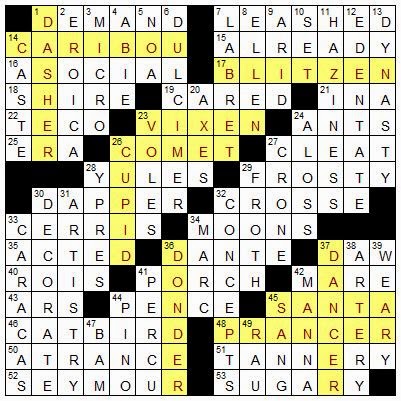 Below is a list of ten of the wackiest words I've seen in pre-Shortzian crosswords from 1960.  Can you match each word to its picture?  Check the answers below the pictures section (see "Answers to 1960 Vocabulary Quiz") and then feel free to post your score in the comments—the first person to post a score and the person who reports the highest score will receive special recognition in next week's post!  And now for the words (some of which originally appeared as plurals or variant spellings but have been normalized for the purpose of this quiz):

Email ThisBlogThis!Share to TwitterShare to FacebookShare to Pinterest
Labels: Blast! from the Past, Mark Diehl, unknown constructor, vocabulary quiz