Now that the Thanksgiving holiday weekend is behind us—delightfully topped off by Puzzazz's free thank you gift for everyone, Bruce Leban's Jumping to Conclusions hangman riddles!—it's time to revisit the American Crossword Puzzle Academy and Hall of Fame.  As I mentioned last week, I have something more on this short-lived but historic enterprise, thanks to litzer and proofreader extraordinaire Mark Diehl!  After my November 21 post on the Crossword Puzzle Academy appeared, Mark wrote me that he was able to dig up the original membership solicitation flyer he'd received in 1989 from Robert Guilbert!  Mark continued:


I remember paying for the membership and signing a Charter Member placard for the proposed display wall.  I think the missing section of page 3 and 4 was the application form and it had a drawing of the proposed signature display wall.

I didn't attend the first and only meeting in 1990.  I vaguely remember talk of a commemorative book of puzzles with pic and bio of member-contributors as a fund raising project.  Don't know if this ever happened—I wasn't contacted to submit anything.  Perhaps Guilbert passed away and the book never saw the light of day.


I've posted the four pages of the flyer on Scribd—you can see them by clicking here.  The first page mentions the May 11, 1988, meeting at the Harvard Club in New York, which was attended by Frances Hansen (who stood in for Maura Jacobson), William Lutwiniak, Eugene T. Maleska, Stanley Newman, Will Shortz, Mel Taub, and Will Weng.  Maura and the six male attendees became the "ad hoc Founding Board of Governors."  The second page mentions British constructor ("setter") Paul Henderson, who reportedly was in touch with Guilbert about the possibility of establishing a U.K. Academy and alludes to an upcoming meeting in Britain to discuss that, along with the idea of an International Academy and Hall of Fame.

Membership in the Crossword Puzzle Academy was $10.00; here is what it included:

Then, a few days ago, Mark wrote me again, saying he'd found another stash of Crossword Puzzle Academy papers while searching for something else.  I've posted them all on Scribd—to see each one, click on its name below: 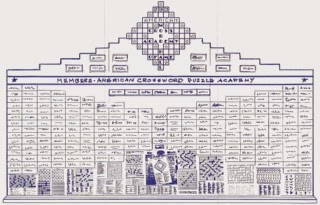 Report 4 also mentions the possibility of publishing a compendium of puzzles by members, which would also include a headshot and thumbnail bio of each constructor (like with the crosswords I edit for the Orange County Register's associated newspapers), to "acquaint puzzle fans with the real people behind the names as well as the identities of those who supply generic feature fare."  It goes on to say that individual members might also write "a brief essay on the nature of the craft and its historical genesis."

Thanks so much, Mark, for saving these amazing treasures from the past for all these years and sending them in—they really bring the American Crossword Puzzle Academy and Hall of Fame to life!  Robert Guilbert was clearly a visionary—perhaps someday his idea will be revived.

Blast! from the Past Change

Puzzazz's new hangman book gave me an idea for a change to the Blast! from the Past format.  Since figuring out the answers to the Blast! challenges has been a bit tough without any surrounding information of the sort that would be in crossword grids, I've decided to provide a new letter each day.  When the Blast! challenge first appears, you'll just see blank underscores for where the letters should be.  The next day, one letter will be filled in (in all the appropriate spots); the third day, a second letter will appear, and so on.  So the challenge will still be to see how fast you can solve it, but I'm hoping this format will make doing so easier!

It's been a busy week, and we're finally closing in on 1966—I'm just waiting for the last few proofread puzzles!  Saturday night Mark Diehl sent in 30 puzzles and then 31 more Sunday morning.  Sunday afternoon Denny Baker sent 31 more, which were followed by another 30 from Mark that night.  Monday night Dave Phillips sent in 30 puzzles, along with a continuation of his very interesting proofreading log from the October 10 post (reproduced in two parts below).  And then Thursday afternoon Todd Gross sent 11 puzzles, in which he found 16 mistakes.  Thanks so much again, everyone—we're making great progress! 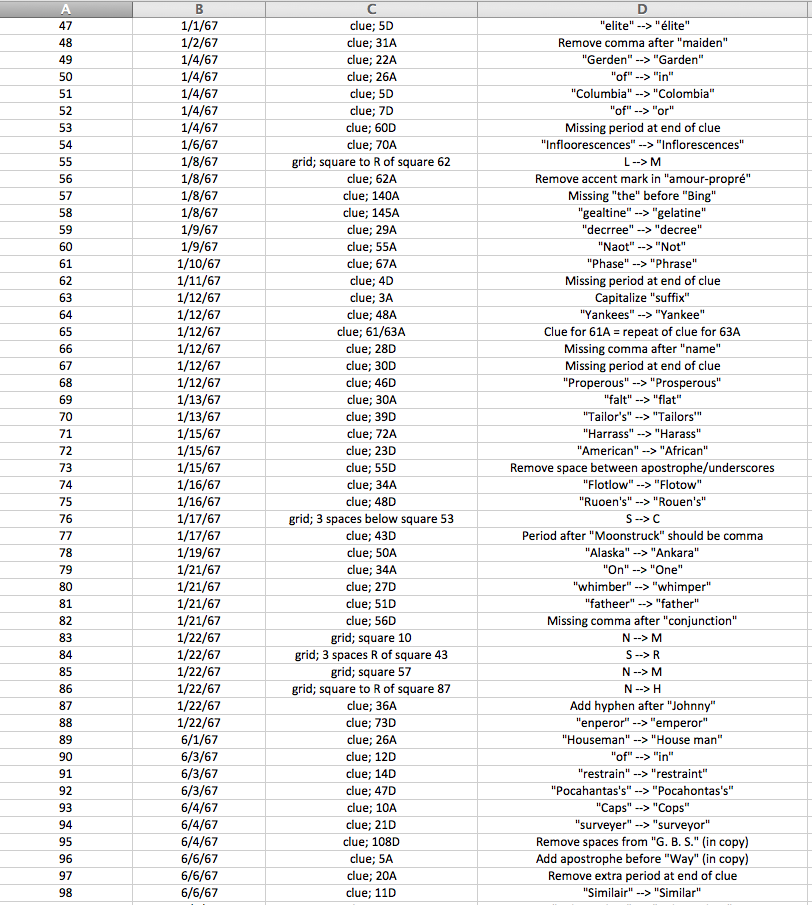 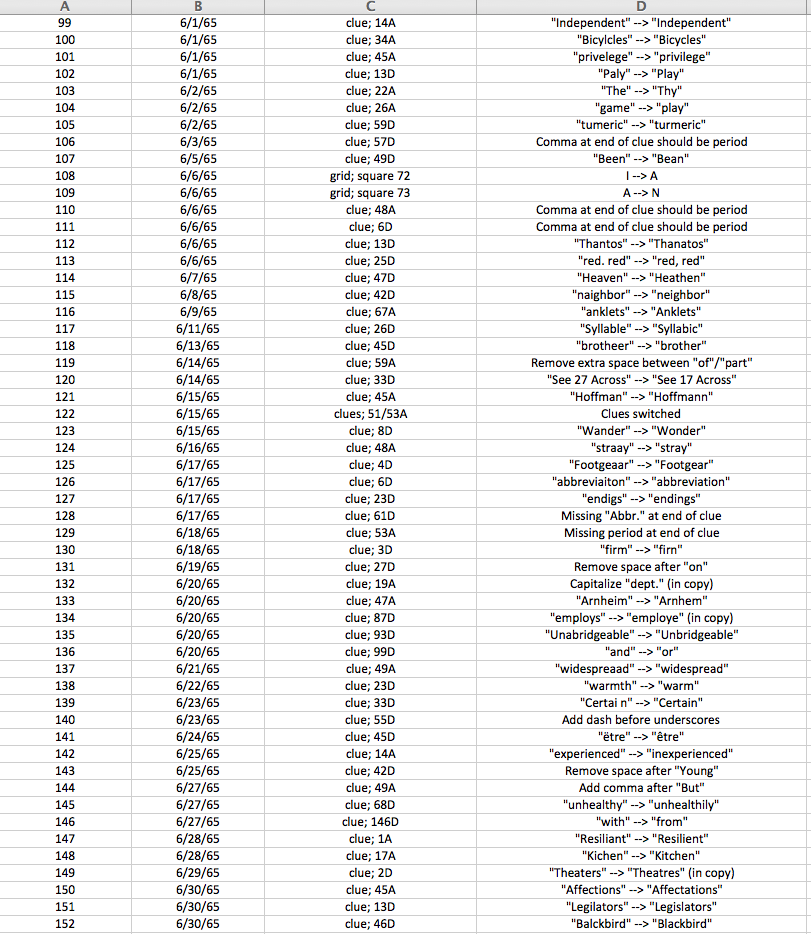 Posted by David Steinberg at 4:08 PM