25 Years of Puzzles Up, Plus Dave Phillips's Proofreading Log

We reached a major milestone yesterday:  The 25th year of proofread puzzles—1969—went off to XWord Info, and, thanks to Jim Horne, they're now up with all the others through November 20, 1993!  Great work, everybody—it's wonderful to see so many years of the puzzles fully litzed, proofread, and readily accessible!

We've been making amazing progress with the proofreading lately—so much so that I'm optimistic about potentially finishing by the end of next summer (though I wouldn't place bets on that quite yet!)!  Saturday morning Mark Diehl—who currently leads the Pre-Shortzian Proofreading Challenge, with 769 found mistakes (congratulations, Mark!)—sent 21 puzzles with 22 mistakes, then 31 more that night with 16 mistakes.  A short while later Tracy Bennett sent in 31 puzzles with 42 mistakes.  Then Sunday afternoon Mark sent 20 puzzles with 14 mistakes; late Tuesday night he sent another 26 with 14 mistakes, which were followed by 17 puzzles with 12 mistakes Wednesday night and then later 30 more with 38 mistakes.  Thursday afternoon Mark sent another 23 with 12 mistakes, then 19 more with 20 mistakes.  Late that night Dave Phillips sent in 31 puzzles with 46 mistakes, and Friday morning Todd Gross sent 5 puzzles with 9 mistakes.  Awesome job, everyone—thanks so much!

Last night new proofreader Dave Phillips sent in his first batch of proofreading, along with an Excel file he'd made of all the litzing mistakes he found!  Though listing all the mistakes isn't necessary, I found looking through the file fascinating—I was especially intrigued to discover that the litzing mistakes aren't evenly distributed throughout a month.  Further, when a puzzle has one litzing mistake, the probability of that puzzle having an additional mistake appears to increase:  Of the 22 puzzles that had litzing mistakes, only 8 had a single mistake! 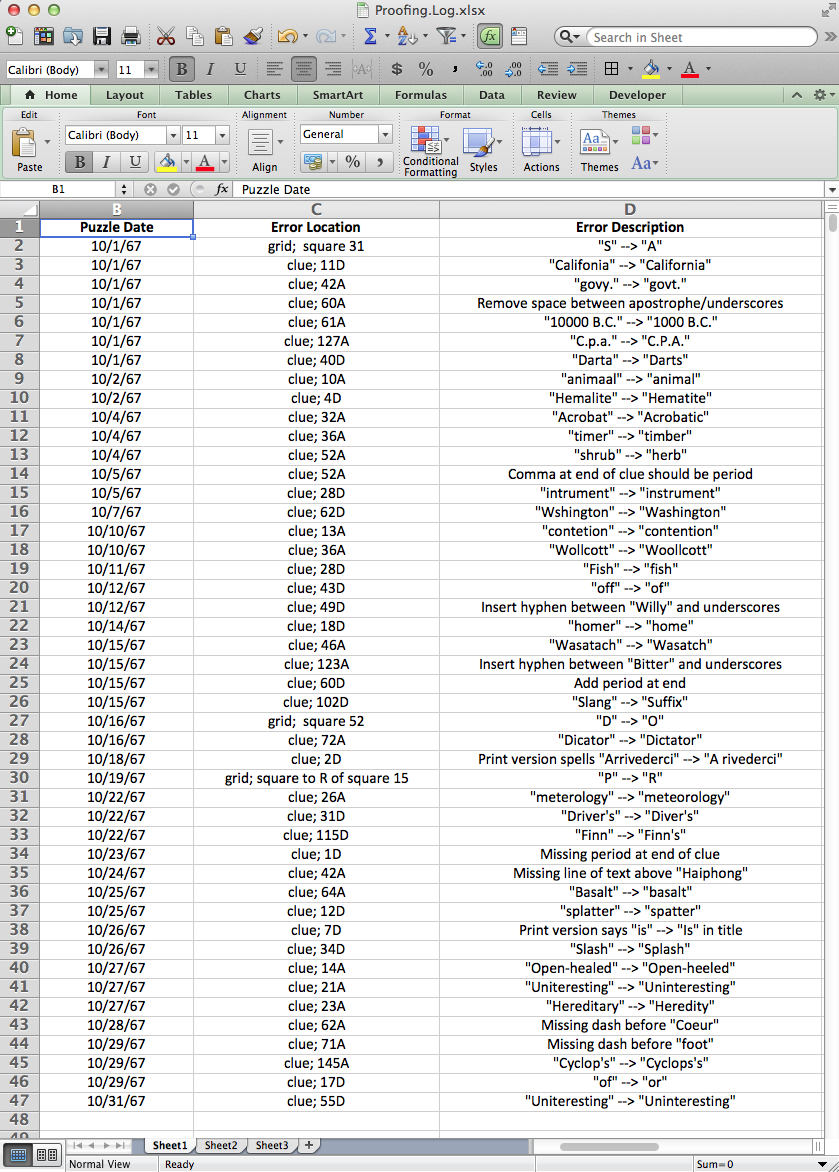 It's also very interesting to see what kinds of mistakes typically appear—usually just straightforward typos, but sometimes the mistakes are related or even completely different words!  As I've mentioned before, a few people have asked me why we don't just post the unproofread litzed puzzles, since proofreading is such a time-consuming—and, for many, tedious—process.  This is why!  Thanks so much again for sending this, Dave!

Today's featured puzzle, whose constructor is unknown, was published December 13, 1969; edited by Will Weng; litzed by Martin Herbach; and proofread by Mark Diehl.  Now that the 1969 puzzles are live, the puzzle can be either viewed or solved on XWord Info.  This brilliant Weng-era crossword ties the record for the lowest block count in a pre-Shortzian New York Times puzzle:  23.  [Note:  I also blogged about the other 23-blocker from the Maleska era.]  What really makes this puzzle stand out, however, is that it doesn't just set a record—the four symmetrical, interlocking 15-letter entries form a theme of terms related to accounting and computing, and the fill is both lively and largely junk-free!  The strongest entries in the nonthematic fill are HOME RUN, MEDUSA, SIDE BETS, SICILIA, EPIGRAM, and TUNE OUT, but I also loved seeing the more unusual words PICTISH ("Of an Old British people."), BELDAM ("Hag."), PHENOLIC ("Kind of acid."), SNUFFER ("Candle device."), and PLICATE ("Folded.").  I'm less enthusiastic about the long nonthematic entry PAN FRYER ("Cooking chicken."), which seems to be much more commonly referred to as FRYER; in addition, SERENES ("Tranquil expanses."), SOBERER, and CEDER strike me as somewhat roll-your-own/not-really-in-the-language.  Nevertheless, I'm still blown away that this puzzle has 23 blocks, a comprehensive theme, and so many lively entries in the nonthematic fill—it's truly a masterful construction!  The clean short fill is further evidence of this mystery constructor's expertise—the only short entry that was completely new to me was RAUS ("German's 'Out!' for short."), and the puzzle has just two partials (I SEE A and IF AND), both of which are short and don't detract much from the filled grid's overall visual appeal.  Although many solvers may have been frustrated by the high number of foreign words in this grid, I appreciated seeing them, since three are from Latin (ITER, AMAS, and SICUT), which is my favorite language.  Finally, I was intrigued by the entry LA VERNE—since the sitcom "Shirley & Laverne" didn't exist until seven years after this puzzle's publication, the constructor was forced to clue this entry as the rather obscure "Southern California town."  I've lived in Southern California for years, and I'd never heard of La Verne before seeing the entry in this puzzle.  The puzzle is thus one of those rare crosswords that might have been more accessible had it been published at a later time!  In all, this is an extraordinarily elegant pre-Shortzian puzzle from a constructor's standpoint, and I can imagine that a good number of Weng's solvers enjoyed puzzling through it.  I even had more fun than usual blogging about it, which really says something about its quality!  Here's this puzzle's solution grid (with highlighted theme entries): 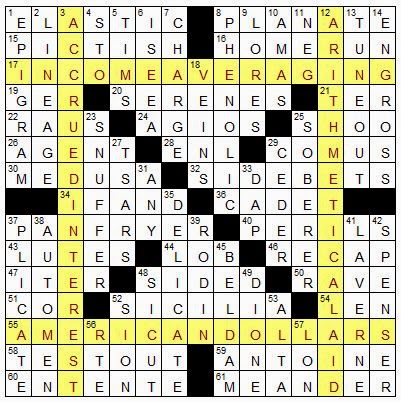 Posted by David Steinberg at 5:28 PM