Near the beginning of August, I received an e-mail from litzer, proofreader, and historian Todd Gross, who'd been contacted by Andy and Harriet Earnest, the children of pre-Shortzian constructor Louise Earnest.  Louise published 79 puzzles under the editorships of Margaret Farrar, Will Weng, and Eugene T. Maleska and was approaching her 100th birthday, which is today!  Happy Birthday, Louise!  Louise kept excellent records of her puzzles (and correspondence with puzzle editors), and with Andy's help, I was able to identify 49 more puzzles, previously listed in my records and on XWord Info as having been constructed by "Unknown," that were actually constructed by Louise!  This was truly a bonanza—thanks so much again, Andy, for your help in compiling the list of Louise's works, complete with their 1-Across and 1-Down entries and actual or approximate publication dates!  And thanks again, Todd, for putting me in touch with Andy!  My hope is that there will be other similar "finds" in the future, though perhaps none quite as major as this one!  To see all of Louise's New York Times puzzles on XWord Info, click here.

I hope to have more on Louise in a future post, but in the meantime, please enjoy the following, courtesy of her family.  The photo was taken during a period when Louise was actively constructing puzzles and originally appeared in The Bantam Great Masters Winning Crossword Puzzles, which was published in 1980. 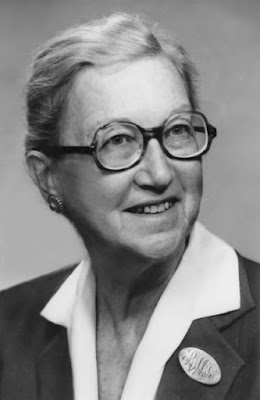 Louise published her first crossword puzzle in The New York Times on July 16, 1957.  More than 25 years and countless puzzles later, she still “enjoyed the thrill of putting in that final letter.”

Through the years, Louise worked with three editors of the New York Times puzzles:  Margaret Farrar, Will Weng, and Eugene T. Maleska.  Her favorite remains Margaret Farrar, whom she credits with encouraging her to continue constructing puzzles.  Margaret’s handwritten kind words were “all [she] needed to keep going.”  A note from Maleska in 1979 said, “Hereafter, I suggest you place the extra stamp inside the return envelope.  If you continue to send me such fine puzzles, you won’t need a 30 cent reply.”  Clearly Mrs. Farrar was not the only editor who appreciated Louise's puzzles.

In addition to publishing in The New York Times, Louise was a regular contributor to crossword puzzle book series, including those published by Bantam House, Pocket Books, and Simon & Schuster and edited by Farrar, Weng, and Maleska.  In 1980, she was awarded one Fourth Place prize and two Fifth Place prizes in Bantam’s Great Masters Crossword Puzzle Hunt, edited by Will Shortz.  Her puzzles have appeared in more than 40 books, many of which contain several of her creations.

Born in Dover, Pa., in 1915, Louise lived most of her life in the same small town.  She married William H. Earnest, a CPA, in 1941, and her family includes a daughter, Harriet Earnest, a CPA in Warwick, N.Y.; and a son, Andrew Earnest (Janet), a retired Chairman of the Department of Mathematics at Southern Illinois University Carbondale.  Finding herself a housewife raising two children, puzzles became a mental sanctuary for Louise.  Her puzzle board (along with a large eraser!) was never far away when she was washing dishes or ironing shirts.  An inspiration would strike, and more blocks on the grid would be filled in.  Constructing the puzzles was the challenge; “writing the clues was easy.”

When asked what gave her the idea to create a crossword puzzle, Louise replied, “The puzzles of the day were so easy, I figured I could do better.”  Explaining her focus on word agility, Louise said, “With two CPAs  and a mathematician in the family, figures were being well taken care of, so I felt words should be given a chance—hence crossword constructing for me.”  Rest assured, family and friends knew better than to expect to win a game of Scrabble from Louise!

In a generation when few women attended college, Louise earned a B.A. in Romance Languages from George Washington University.  She is the recipient of an award from the Republic of France for excellence in French studies.  Louise thoroughly enjoyed her time in Washington, D.C., and took full advantage of all that the city had to offer.  Her first years of marriage found her in Philadelphia, but city life gave way to home town living back in Dover in order to raise her family.

Louise’s passions include several other areas.  An accomplished painter in oils, her last one-woman show was held at the Lycian Center in Sugar Loaf, N.Y., in 2005 to celebrate her 90th birthday.  Louise began a life-long love affair with traditional jazz as a teenager.  She and Bill spent a lot of time listening to records from their collection of several thousand—many old 78s from the ’20s and ’30s—and traveled far and wide to search out good live jazz.  For more than 20 years she coordinated a coed “Great Books” discussion group.  Flea markets were always an adventure to seek out an antique doll to add to her collection.  Bill and Louise were also community activists, joining with other parents to ensure that Dover-area schools were accredited.

Her idea of fun?  A trip to New York.  “I really feel deprived if I don’t have several trips a year to check out the museums, shows, and galleries.”  Special travel through the years included a trip to France shared with her daughter to celebrate her 70th birthday, and trips to Sanibel Island, Florida, where she liked to “vacation whenever possible . . . for complete relaxation.”

A cherished puzzle memory was the invitation to attend a luncheon held at the Tower Suite of the Time & Life Building in 1974 to commemorate the 50th anniversary of Margaret Farrar’s work as editor of crossword puzzle books for Simon & Schuster.  It was a wonderful opportunity to travel to New York and to meet the lovely person with whom she had corresponded for so many years.  A line from a personal note from Margaret is one of Louise’s favorites to quote:  “Thank you for all the delicious puzzles.”

Louise now resides in Warwick, N.Y., with her daughter, Harriet.
Posted by David Steinberg at 7:04 AM