Still wondering how the "Moving Forward" metapuzzle worked?  Although quite a few people wrote to me saying they were stuck, only 11 solvers actually submitted an answer, so the puzzle was clearly much more of a stumper than I'd intended!  Well, whether you tried it or not, the time has come for an explanation.

Let's start with the note, which specified that the answer was a "two-word phrase especially appropriate now that the project is essentially over."  The note also contained a link to the XWord Info page listing all the entries commonly used in pre-Shortzian puzzles that have yet to appear in a Shortz-era grid.  As everyone who submitted an entry realized, this page was essential to solving the puzzle.  But the note also contained another hint, albeit a very subtle one.  Were any of you wondering why the third sentence was written in such a clunky way?  Why did it read "To learn more about the crosswordese entries featured in this puzzle, each of which has been used zero times in the Shortz era, go to http://www.xwordinfo.com/Popular?year=psunique," as opposed to something like "To learn more about the uniquely pre-Shortzian crosswordese entries featured in this puzzle, go to . . . "?  Well, more on that later! 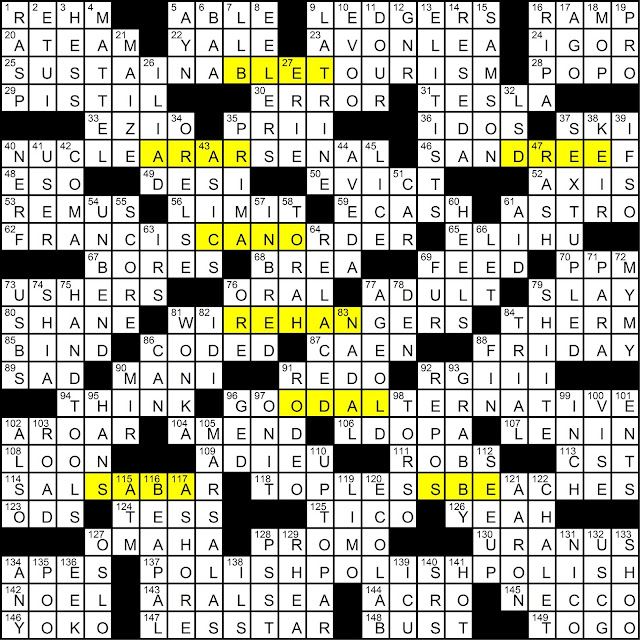 Now, notice what happens when you arrange the pieces of pre-Shortzian crosswordese by their order in the grid:

The first letters spell BAD CROSS . . . which was the most common incorrect answer!  Remember, the answer was supposed to be a two-word phrase especially appropriate now that the project is essentially over.  Although BAD CROSS is the right number of words and relates to the pre-Shortzian puzzles, it doesn't quite fit the description.  So what was the purpose of BAD CROSS?  Well, I'd be lying if I said it wasn't a deliberate trap, but its overarching purpose was to be a hint for the next stage of solving.  The other major hint in the grid was POLISH, POLISH, POLISH—if BAD CROSS were indeed the answer, then why include POLISH, POLISH, POLISH rather than sticking with the original eight theme entries?  Another tip-off was that certain easier-to-fill areas of the grid were filled much more poorly than you might expect.  Take a look at the upper center, for instance, which contains both LLB and EELERS.

So, armed with BAD CROSS and the aforementioned observations, the next step was to notice that nine of the Across clues were unusually lengthy/awkward.  What did these nine clues have in common?  The word "zero," which was also forcibly worked into the third sentence of the note and which describes the number of times each piece of pre-Shortzian crosswordese on the XWord Info list has been used in the Shortz era.  I've listed the strained clues and their answers below: 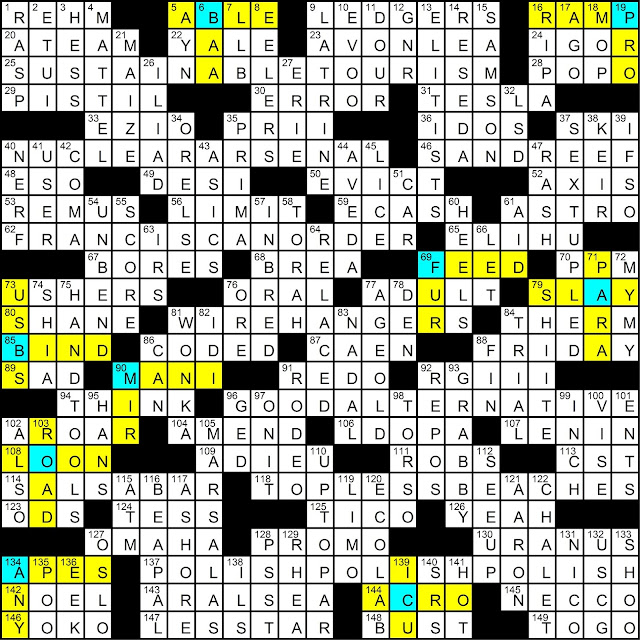 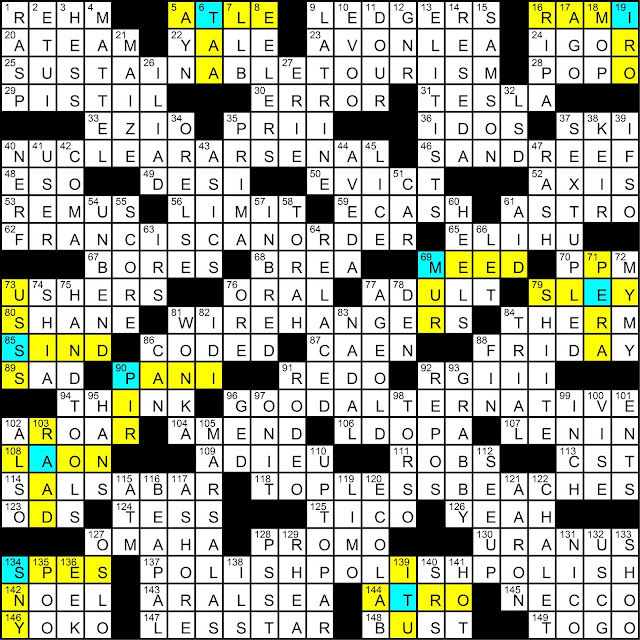 When the letters at each bad cross are read in order, they spell TIMES PAST, which is the correct answer to the puzzle:  The project, which converted all the available Times puzzles published before Will Shortz became editor into a digital, fully analyzable format, is basically a thing of the past at this point.

It took a long time for the first correct solution to arrive in my inbox—I was seriously worried I had made the puzzle too hard and would have to give a hint!  So I was thrilled to receive not just one but two correct submissions at exactly the same time (10:59 a.m.) on Friday, August 28!  More followed—here's a list of everyone who sent in the correct solution, along with the dates and times (Pacific time) of their submissions:

I used a random number generator to pick a winner—Jeffrey Harris, who coincidentally also won the previous metapuzzle contest (Metaleska)!!!  Congratulations to Jeffrey, who will receive a $50 iTunes card, and to everyone else who submitted the correct solution!

Thanks, too, to all the solvers who entered or attempted to enter the contest, and special thanks to Jim Horne and Jeff Chen for hosting the puzzle on XWord Info!

Before I wrap up this wrap-up, though, I'd like give a special shoutout to my favorite incorrect answer, which was submitted by Ralph Bunker.  After noticing the hidden pre-Shortzian crosswordese in the long entries, Ralph zeroed in on the entry CANO, which he discovered was Latin for "I sing."  Ralph also noticed that "I sing" is a homophone of "icing," which he noted could describe the finishing touches on the project.  Ralph's final answer, therefore, was "I sing."  Kudos to him for coming up with a very clever answer I'd never even anticipated!

Finally, here are a couple more interesting coincidences and observations that relate to "Moving Forward."  First of all, Matt Gaffney happened to publish a brilliant metapuzzle whose gimmick also involved changing single letters of grid entries to make new thematic ones last week, which I have a feeling may have subconsciously helped a number of the correct solvers!  So I'd like to give a shout-out to Matt for reading my mind . . . and for being the true master of metapuzzles!  Second, as Barry Haldiman noted, the entry CANO isn't as undesirable as the other pieces of pre-Shortzian crosswordese now that former Yankee Robinson CANO has become famous.  Finally, Jim Horne e-mailed me a couple days ago noting that a piece of pre-Shortzian crosswordese on the list—ARO (clued modernly as "Michael Sheen's character in 'Twilight'")—had been reused in the Sunday, August 30, 2015, New York Times puzzle.  After panicking for a few minutes, I was relieved to see that I hadn't used ARO in my meta!  This just goes to show that even the ugliest-looking bits of pre-Shortzian crosswordese can sometimes be salvaged, so we shouldn't necessarily assume that all the uniquely pre-Shortzian entries are bad!
Posted by David Steinberg at 3:43 PM