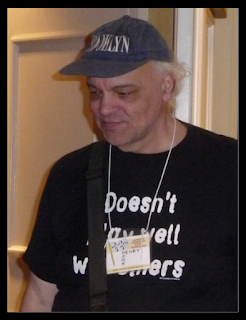 Henry Hook, a crossword legend, passed away this week after a period of failing health.  This is the third memorial post I've written now about legendary pre-Shortzian constructors who have died this year—the first two were Bernice Gordon and Merl Reagle—and it doesn't get any easier.  According to my (still incomplete) records, Henry published 33 puzzles in The New York Times under Will Weng and Eugene T. Maleska and 25 in the Shortz era.  His puzzles were unusually well filled for their time and always had something out of the ordinary about them.  I won't say much more other than that it was a thrill for me to finally meet Henry at the 2014 ACPT.  We didn't say a lot to each other, but that didn't matter.  My parents wanted to take a picture of us together, but I'd heard that Henry didn't like posing for photos, so they didn't.  Later, though, they took this candid shot so I could remember meeting him that day.  I always will—rest in peace, Henry.
Posted by David Steinberg at 3:29 PM