Some time ago I received an email from Newsday crossword editor Stan Newman, who'd discovered a long piece about William Lutwiniak, one of the most prolific New York Times crossword constructors ever.  Lutwiniak, a former cryptologist for the National Security Agency (NSA), published at least 304 pre-Shortz puzzles in The Times, which are available here on XWord Info.  Stan's find is a long, formerly top-secret but now declassified interview by Robert Farley of the NSA on October 18, 1981.  Here's Lutwiniak discussing his background: 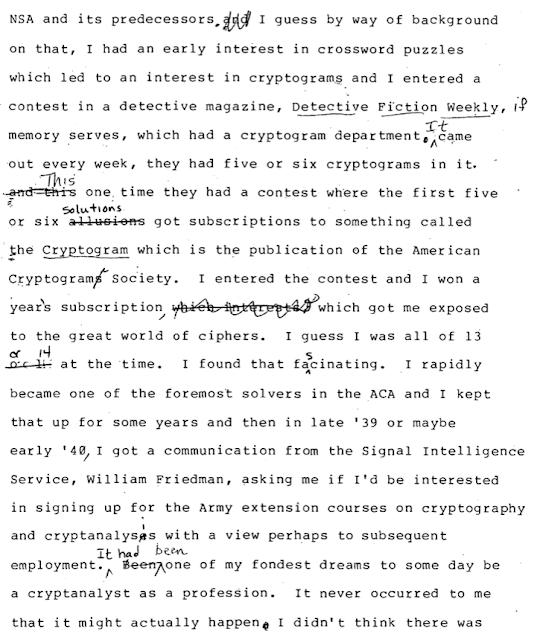 To read the full interview, click here.  (And for more on William Lutwiniak, see other links on this blog, including on the Pre-Shortzian Constructors page; this CROSSW_RD Magazine profile by Helene Hovanec; and, as Stan suggested, links that come up when Googling "Lutwiniak NSA," such as this Wikipedia entry.)  Thanks so much again, Stan, for this great discovery!


In mid-April, Thomas Heil emailed The New York Times about his mother, Regina M. Heil, who'd built a daily crossword puzzle edited by Will Weng.  The puzzle was published on January 29, 1973.  Tom wondered whether The Times had a copy in its archives or wanted one for its files.

The email made its way to Times crossword editor Will Shortz, who sent Tom a copy of the puzzle, which our records at the Pre-Shortzian Puzzle Project (and now on XWord Info) had previously listed as being by "Unknown."  Tom confirmed that this was indeed the puzzle his mother had constructed; he also mentioned that he recalled her having submitted two other puzzles to Will Weng before this one was published.  "Mr. Weng put my mother through Goldilocks editing," Tom noted.  "The first puzzle was too hard, the second too easy and the third was just right."  She received $10 for the puzzle.  Tom added that his mother "never missed a day of the puzzle, all while raising nine kids.  She was pretty amazing."  At the time, she lived on Thomas Road in Wayne, Penn.

Will suggested that Tom send a headshot of his mother, if he had one, to Jim Horne at XWord Info so it could appear with her puzzle.  I emailed Tom too asking if we could write about her on this blog and encouraging him to send along any further information or photos.

I then received an email from Bill Heil, Tom's brother, along with this photo and the one above:


My father used to sit in the den and do the NY Times Sunday puzzle.  My father could do at least 3/4's of the puzzle and when he was stumped, he would get your mother and I to brainstorm.  I still do the NY Times crossword puzzles.  They appear in the Desert Sun (the Palm Springs paper) daily and Sunday. I can complete the Sunday puzzle in one sitting about 1/2 the time, and completely at least 90% of the time. I run into trouble when they use rap music stars, current movie/TV stars or new movies as clues.


Did I mention that I also do the puzzles every day but Sunday. Sundays Bobbie [Ed.: Tom's wife], who does at least a puzzle a day, and I work on the puzzle together. It's good for the marriage — 28 years now.

Thanks so much again, Tom, Bill, Mary Colleen, and Brian, for helping us identify and get to know the long-lost constructor of this puzzle!  It's also wonderful to see how an interest in puzzles was passed down over three generations—from Regina's father, to Regina and Brian, to Tom himself.

Posted by David Steinberg at 2:43 PM