It is with great sadness that I report the recent passing of another crossword great, Charles Gersch.  His son Jonathan, also a Times crossword constructor, contacted me with this news in August.  Charles was the beloved husband of Marianna and devoted father of Alan, Jonathan, and Jennifer.

I was honored to interview Charles four years ago for this blog; he published 47 puzzles in The New York Times and continued his impressive constructing by hand, even after computer software became available.

On August 21, Will Shortz posted the below reminiscence on Cruciverb.com:

Jonathan Gersch, the son of Charles E. Gersch, has asked me to post the sad news of his father's passing.

Younger constructors may not know, but Charles was one of the greats in crossword history.  His first puzzle appeared in the old New York Herald Tribune on Feb. 21, 1944, when he was just 13 years 6 months of age.  This made him the youngest known crossword constructor for a major newspaper in history — until that record was broken, narrowly, earlier this year in the Times.

I published 17 of Charles' puzzles between 1994 and 2010.  He had 30 more under my predecessors, going back to 1953, and many more in other venues, including the Herald Tribune, Newsday, Simon & Schuster books, Games magazine, Crossworder's Own Newsletter, etc.

In one memorable 1996 Times puzzle, Charles had GEORGE BURNS and GRACIE ALLEN stacked near the top, OH GOD BOOK II and CENTENARIAN stacked near the bottom, THE SUNSHINE BOYS running across the middle, and CIGAR SMOKER and COMEDY TEAMS reading down, crossing the central entry — all in a pretty solid construction.  That's fancy puzzlemaking.  It ran, appropriately, around Burns' 100th birthday.

David Steinberg published an interview with Charles here (scroll down to Aug. 23, 2013).

My condolences to Jonathan and everyone who knew his father.

Although Charles is no longer with us, he and his puzzles will continue to have a celebrated place in crossword history.

This summer while helping Will Shortz with crossword submissions, I came across a page of guidelines for constructors written by none other than former New York Times crossword editor Will Weng!  There were no other pages, but this one was a copy, which Will Shortz let me keep (thanks again, Will!).

"The Crossword Puzzle Information Sheet" (see below) was sent to a constructor and has this handwritten note by Weng at the top:  "Your puzzle looks pretty good.  But— please follow the format."  An arrow points to details on "Mechanics in general" and "Particulars." 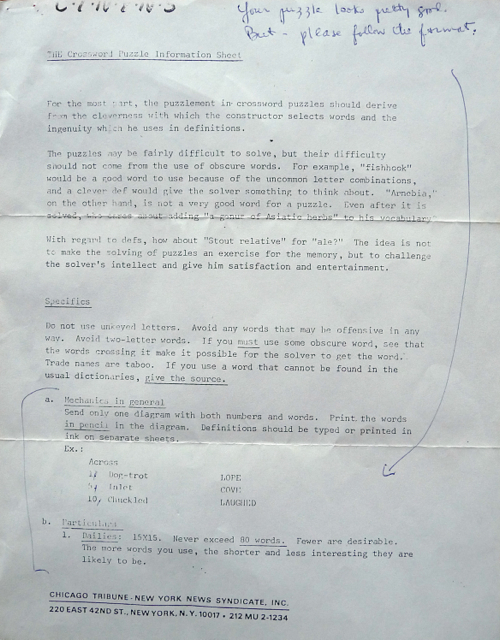 Perhaps the most interesting thing about these guidelines is Weng's philosophy on what puzzles should be.  He preferred their difficulty to come from clever clues and lively words and phrases, rather than from obscurity.  This philosophy was ahead of its time and foreshadowed the "new wave" and today's "golden age of crosswords."

Several weeks ago I received an email from Jon Guilbert, whose older brother, Rob, had written to him about following up on previous coverage on their father, Robert, in this blog.  Beginning in 1988, Robert Guilbert spearheaded an effort to create a Crossword Puzzle Hall of Fame.  (For more details, see the posts of November 21, 2014;  December 5, 2014; December 19, 2014; and May 22, 2015.)  Jon had written previously about his father in a blog comment, which you can read here, and offered more details about this enterprise and his father's fascinating life:

He was a remarkable man—as are all/most fathers I would think—and this was his last "big project and idea" before his death in October of 1990.  In the [below] photo he can be seen working on a puzzle that he designed as a "Moebius Strip"—an "Infinity Crossword Puzzle"—a puzzle without a beginning and an end. He was going to have this game manufactured and marketed under the name "Pago Pago," I believe.  I also think his work on this crossword game of his was the genesis for his wanting to create an institution recognizing and honoring the "greats" within the crossword world. . . . [O]ur Dad . . . was also the original "Don Winslow of the Navy" playing the lead character in the late 1930s NBC coast-to-coast radio thriller and an advertising executive with J. Walter Thompson.  The luncheon meeting—the first and last of the Institute—was held at the Harvard Club in NYC.  Dad had made a connection with one of the members of the Club, who offered it as a meeting place.  I know Dad was very pleased to have this "blue ribbon" venue [in which] to gather.

Thanks so much again, Jon and Rob!  I wish I could have met your father.

Will asked Joli for the dates of those puzzles, and with that information, Jim Horne of XWord Info and I were able to add names to some of the previously "Unknown" constructors in our databases.

We're grateful to Joli for this valuable update and hopeful that more currently anonymous pre-Shortzian constructors surface in the future.

Some time ago renowned constructor Jim Page sent me a copy of an email he'd sent to Jeff Chen at XWord Info.  Because there were two pre-Shortzian constructors with the last name of Page—Jim and Christopher—and many bylines in what records we do have list only the constructor's last name, determining which puzzles were built by Jim has been difficult.  (And, as I've often mentioned, thousands of daily puzzles remain anonymous, with no record of their constructors.)  Here's what Jim wrote:

[T]his is as accurate as I'm able to be, give or take some puzzles lost to history.  I've credited myself with 3 Maleska Sunday puzzles that Gene had accepted for publication in the Times and that Shortz rejected upon his appointment as editor. Those 3 puzzles got published elsewhere.

Thanks so much, Jim—at least we have this information now, which is more than what exists on many other pre-Shortzian puzzles whose authors will likely remain anonymous.

This summer I received an email from crossword constructor and historian Todd Gross informing me of an obituary of Audrey Joy Koch.  Koch passed away in 2011 at the age of 91 and published at least five crosswords in The New York Times.  To read more about Audrey, click here.

A couple of weeks later, Todd found an obituary of cartoonist and New York Times crossword constructor Bob Lubbers, who'd recently passed away.  Lubbers, who published at least one pre-Shortzian puzzle in the Times and four Shortz-era puzzles.  According to this obituary, Bob won an award for the best Sunday crossword in 1995, which was reportedly his first constructing attempt.  This 1995 date, though, may be a mistake, since Lubbers's earliest published puzzle in The Times was published on April 13, 1975, and was his only Sunday publication there.  To read more about Bob, click here.

Todd emailed me again about other finds:  an obituary of Melvin Kenworthy, who published at least 23 pre-Shortzian puzzles in The New York Times; and an obituary of Robert Doll, who published 6 Shortz-era crosswords in the Times.  Todd noted that although Doll passed away in 2011, his final Times puzzle didn't appear until 2013.

Thanks again, Todd, for all this great research!

Solver Nick Harvey wrote to me some time ago about George Rose Smith, constructor of at least 10 pre-Shortzian puzzles published in the Times.  Nick had been working his way through the Sunday puzzles from 1969 to the present and noted, "This allows me to watch the evolution of the NYT puzzle unfold as I go through the Weng, Maleska, and early Shortz eras."  He became curious about George Rose Smith and wrote the following:

I had finally thrown in the towel after finishing most of the November 2, 1980, puzzle, "Nickname Dropping," but not being able to get that last themer figured out.  Try this puzzle—it has quite a tricky theme, especially for its time.  Similar "substitution" themes have appeared in the Maleska and early Shortz period of the 80s/90s, but this is one of the earliest, and I would imagine that solvers back in 1980 could have had a lot of trouble with this.  I still appreciate the genius into coming up with this theme, and finding ten examples to work symmetrically into the grid—not an easy thing to do in a time when very few people had access to a computer (and probably not even a VCR or microwave oven—vinyl was still the main format for recorded music).  Weng and Maleska really rolled the dice on trying out some groundbreaking theme ideas on the solving public, and Shortz has of course continued on that tradition.

Anyway, I found this on Mr. Smith.  It turns out that, just like Victor Fleming today, he was a judge in Arkansas.  One wonders if he was the one who got Mr. Fleming into solving (and ultimately constructing) the NYT crossword puzzle.  I can certainly imagine that Justice Smith and Justice Fleming may have been colleagues at one time, serving together for Arkansas's judicial system.

George Rose Smith passed away in 1992, during a period in the early '90s that saw an unusually high number of deaths in the top echelon of puzzlemaking (Luzzatto, Lutwiniak, Maleska, and Weng, to name a few).  I can only hope that the constructors who have moved on from this world, are looking down on me from Heaven and watching me whenever I am working on one of their creations. :-)

Constructors of the past may be long gone, but they are immortalized by the legacy of their puzzles to be enjoyed by generations to come.

Very interesting stuff, Nick—thanks for sending this, and happy solving!

A while back I received an email from Julie (Trick) Munsterman, who'd been doing genealogical research and come to the conclusion that pre-Shortzian constructor Judson G. Trent—possibly Judson Gordon Trick/Trent—was her great-uncle.  Julie noted that census documents suggest he was born Gordon S. Trick, which might explain some of the difficulty in tracking down his history online.  She added that Trick's father was a Presbyterian minister and suggested that this could explain the theological studies.

Thanks for this genealogical sleuthing, Julie—this seems like an especially "tricky" trail!

That does it for the time being, since school is about to start up again.  But I do have some other interesting things to go through that I hope to write about at some point in the future!
Posted by David Steinberg at 1:32 PM