Happy Fourth of July!  To celebrate, here are two wonderful new reminiscences of Alfio Micci, a virtuoso violinist and constructor whom I've written about several times before.  For many years, Alfio played in the First Violin Section of the New York Philharmonic; he also published at least 91 Times crosswords in the pre-Shortz era and 11 under Will Shortz's editorship.


In early May this year, the following comment appeared on this blog beneath the December 22, 2012, post containing Al Weeks's tribute to Alfio:

Hello! I'm Alfio's grandson, and I can't tell you how much I appreciate reading this article. I think Alfio's approach to writing puzzles connects to his whole personality. He was the most loving grandpa a boy could hope for, and he supported his family unceasingly. I remember the off-white plastic frame he used to construct puzzles and the bookshelf of reference materials he used to solve them (including the first copy of Ulysses I ever saw). Also, few know this but he wrote lyrics (Grandma wrote music) to a musical for the local school to perform entitled "Bearin' Camp." It was about a bear in a camp. The artistic and intellectual legacy lives on with me and my son, Lennon.

I was thrilled to see the comment and asked the anonymous author to contact me if he'd be willing to be interviewed for the blog.  A few weeks later, I received a response from Christian Recca, who said he was interested and mentioned that his uncles, Alfio's sons, might be as well.  There was a brief delay in getting the interview under way while I was finishing school, but shortly after graduation, I sent Christian a list of questions.  His answers are below.  One of Christian's uncles, Ronald (Ron) Micci, was also interested, and he sent his reminiscences too, along with the photos that appear below.

Alfio was born in America but emigrated to his family's homeland of Italy for a few years, then returned to America when he was very young—less than five, I'm guessing.

Were there any signs in his youth that he would become a musician and crossword constructor?

I'm not sure what sparked his interest in music (one of many questions I'd like to ask the man himself), but by the time he was a teenager he was supposedly practicing an impressive number of hours a day.  At this time, he lived in Chicago Heights.  He also had an avid interest in theatre, even aspiring to be a playwright at one point (he envied the life of being able to lounge around in your PJs and write as much or as little as you felt like—how many lived that life, I don't know).

Many musicians and crossword constructors have a talent for and interest in math and/or engineering.  Was this true for Alfio, and if so, how?

I'm not sure how Gramps did in school, but our whole family is very intelligent, so I don't doubt it.

Alfio's puzzles suggest he had a great sense of humor—was that the case, and do you have any memories of him that speak to that?

Yes, Gramps had a great sense of humor!  We used to spend a lot of time in the ol' backyard pool, and he would deliver a lot of one-liners.  One of his was, "It's a wonderful day for an auto-da-fe."  I had no idea what that meant at the time.  If you don't know, I won't spoil it.  A quick Google search will be worth the time.  "What's black and white and read all over?" was a favorite riddle.  I also recall we played a lot of that party game called "Ghost," sort of an oral crossword puzzle in itself.

Alfio reportedly disliked puzzle-editing styles that involved stumping and frustrating solvers with obscure trivia.  What might he think of today's puzzles, which, within the constraints grids sometimes impose, focus much more on accessible clues and entries?

Given my knowledge of Gramps' musical opinions, I'm thinking he probably would have felt that increased accessibility led to a "dumbing down" of the crossword genre.  That said, he was also very interested in teaching the new generation to love music and language, so who knows?  His grumpiness may have been a product of advanced age.

Many of today's puzzle editors also eschew "politically incorrect" or "triggering" entries, such as GAL FRIDAY or NAZI; sometimes doing so means rejecting an otherwise excellent puzzle.  What might Alfio's views on this have been—would he, for instance, have viewed such entries as part of our cultural and/or historical past and, therefore, as fair game for inclusion in puzzles?

Well, I'm not sure about that one.  Gramps was more progressive than others of his generation:  He respected Dr. Kevorkian and was friends with plenty of gay men.  That said, he was also sort of old-fashioned in his view of racism/sexism/homophobia.  That is, while he condemned overt expressions of hate and promoted equality generally, his view of these issues was limited.  Today, we see the importance of microaggressions and systemic racism.  He may have been impatient with those claims, I'm not sure.  So, all in all, I think he would have thought it was a shame that a whole puzzle would be rejected for one or two "inappropriate" answers.  And yeah, he would find it harmless to have "Gal Friday" as an answer.

Is there anything else you remember or would like to say about Alfio's life, career, and/or puzzle constructing?

Gramps loved his family so dearly, and he put his money where his mouth was—literally and figuratively.  His kids fell on hard times, and he took them in.  His daughter wasn't the best  at housekeeping, so he would come over and clean up.  When she needed to go out of town, he came over and watched us.

He kept up the theatrical pursuits and even collaborated on a musical for his kids' school called "Bearin' Camp" (note the pun).

First, I've attached a number of photographs of Dad, including an interview he did for the South Bergenite in Rutherford a year or two before he passed away [Ed.: see below].
He was a very humble, self-effacing person, and many of the things I learned about him were only revealed later in his life.  He was rather secretive, would never have bragged about them and been forthcoming without being asked.
He was born March 3, 1918, in Chicago Heights.  He and his mother attended the opera, but he was the only one in his family with musical talent.  His sister, Eda, was not musical.  His mother was a seamstress; his father was a factory worker.  His father was very rotund and remote and his English was still somewhat shaky in his 80s.  His mother (Rose Pirani—Pirani from the Pyrenees) was the sweetest, dearest woman, an absolutely wonderful cook, and remained active well into her old age.  I believe his father hailed from Ancona on the Adriatic, albeit my own 23andMe profile identified about half a dozen Italian areas of origin.
My father began violin studies at the age of eleven, and within two years he was giving recitals.
He was the valedictorian of his high school class (Bloom Township High School), earned a full scholarship to the Eastman School of Music.  I understand he was also offered a scholarship in drama to a college in Illinois, though I don't know any of the particulars of his dramatic background in high school.  I know there is a plaque in his high school celebrating notable Bloom High graduates.  The only reason I know this is that a woman accosted me at his wake, said she had gone to his school with him, and that such a plaque existed.
He was also valedictorian of his Eastman class.  And he earned a master's degree from Eastman as well.  (I actually still have his thesis somewhere in the closet.)


He was concertmaster of the Eastman School Symphony Orchestra (this I'm gleaning from his college yearbook photos, attached) and of the Little Symphony.

He also played with the Rochester Philharmonic, a paid gig.  (Doriot Anthony, who later became the first flutist with the Boston Symphony, is also somewhere in the photo.  They knew each other from Eastman.  Ironically, they were both from Illinois but she was a few years younger, so they had not crossed paths before.)


During the war he was a soloist with the Navy Band in Washington, D.C.
He came to New York, played with the Metropolitan Opera Orchestra, then auditioned for the New York Philharmonic.  There were two openings, and about two hundred people auditioned for them.  He spent thirty-one years with the Philharmonic, including the Bernstein years, and rose to the third stand of the first violins.  (Bernstein complimented him at some point on his sight-reading ability.  I only know this through my mother.) 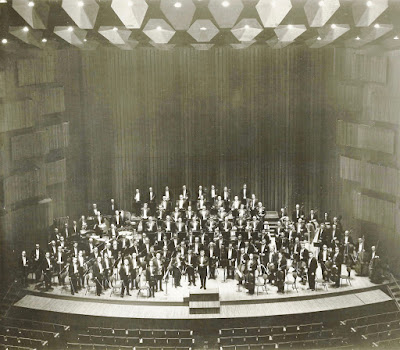 After he retired, he played for several jingle companies in Manhattan, and on occasional movie scores.  (Indeed, my brother and I still receive a very small amount of yearly royalties from his movie gigs from the Film Musicians Union in California.)
Yes, he had a great passion for solving and constructing crossword puzzles.  Up until a few days before he passed away, he was still sitting upright in bed with a little clipboard solving them.  His mind, I'm happy to say, was very sharp up until the end.
He was really a dear person, and every time I would criticize something or someone, he would retort, "He only says nice things about you."
My father played a Joseph Gagliano violin (Naples 1784). 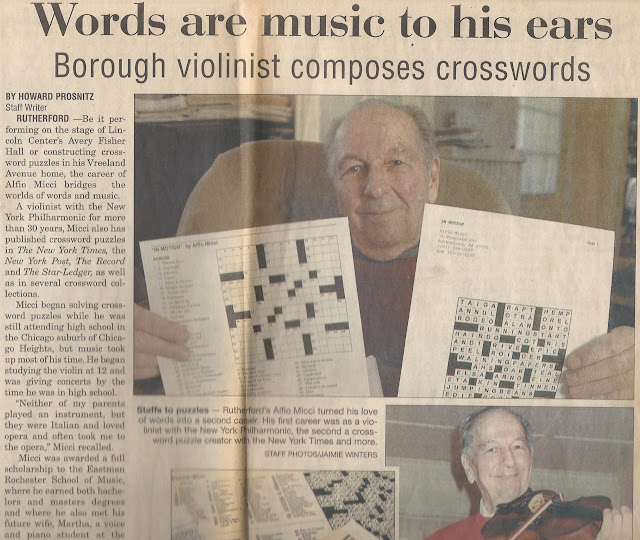 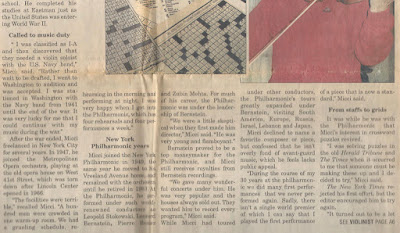 Thanks so much again, Christian, for contacting me about your grandfather and shedding new light on his life and thoughts.  And thanks so much too, Ron, for your illuminating reminiscences and photos of your father's amazing life!
Posted by David Steinberg at 5:03 PM