Over 6,000, Reminiscences of Alfio Micci by Al Weeks, Sneak Peek

I'm delighted to report that we've now litzed more than 6,000 puzzles—a major milestone on the litzing thermometer!  Three days ago a batch of puzzles from litzer Alex Vratsanos put us at 6,001, and now we're rapidly approaching 7,000.  Great job, everybody!

Today I have something very special from Al Weeks, a longtime close friend of pre-Shortzian constructors Frederick Duda and Alfio Micci.  Al, who constructs crosswords himself as a hobby, is a New York University professor emeritus, author of numerous books on Soviet political history, and frequently published writer of many articles, op-eds, and book reviews in Newsweek, The New York Times, The Christian Science Monitor, and other publications.


Al was kind enough to write down his reminiscences of the amazingly creative and prolific Alfio Micci.  According to my (still incomplete) database, Alfio Micci published 91 puzzles under pre-Shortzian editors; XWord Info records indicate that he also published 11 under Will Shortz, yielding a grand total of 102+ New York Times puzzles!  I hope you enjoy Al Weeks's piece as much as I did.

Al for many years played in the First Violin Section of the New York Philharmonic.  This means he performed under the batons of the likes of Stokowski, Toscanini, Stravinsky, Bernstein, et al.  Anecdotes about his experiences working with these eccentric, talented leaders would fill volumes.
Whenever he and his wife, Martha, also a musician, visited me in my condo here in Florida, they would bring along Bach scores that included continuo accompaniment parts for Martha to play on my piano to Al's soloing.  Al knew how much I loved Bach, so he and Martha always performed the Master's music right in my living room.  Sometimes over home-cooked spaghetti with clam sauce, he and Martha performed for friends in their own home.
I mention this in the context of Al's talent in constructing (and, of course, solving) crossword puzzles.  Psychologists and common sense tell us that skill in music is related to skill in the use of words.  Too, crossword construction is, like music, an art.  Al Micci had that talent in spades, or, as in music, in G sharp minor.
I once asked him how he went about inventing his puzzles; so many of Al Micci's creations are preserved in puzzle books under various editors.  He told me he always started with a "theme."  Around this motif, he would build his puzzle.  To him, it was something like a Tchaikovsky symphony.  A theme would blossom in his mind, like the opening, say, of Tchaikovsky's Fourth Symphony.  That would in turn uncork all sorts of related clues.  He once told me:  "I had a lot of time on the road, you know.  We were playing concerts almost as often away from Carnegie Hall as in it.  A lonely, out-of-town hotel room was to me like the reading room of a library.  Your mind automatically turned to thinking and creation."  So, on with the yellow pad and the pen.
I gathered that Al had no problem developing his Acrosses and Downs.  For him, the theme as well as the required words seemed to fill the blanks as easily as his violin produced the complexities of, say, Bach's A minor concerto.  Not surprisingly, many of Al's clues were related to music—specifically, to opera and to classic musical comedy.  It was not unusual for a Micci puzzle to include some lines from Cole Porter, Rogers and Hammerstein,  or Jerome Kern—or, in Italian, words from Puccini or Verdi.  Micci's being Italian meant that such solutions related to Italian opera came to his mind spontaneously.
All this reminds me of the unique value, in my opinion, of Alfio Micci's puzzles.  They were always interesting and fun to figure out.  It was as though the constructor liked and respected his solvers.  Al's puzzles were never obscure or taxing.  He was never trying to stump the solver as if to say, "See!  I foxed you!"  As a constructor—unlike a "boa" constructor—Al was for lending enjoyment to solvers' toils, not tying them up in knots (pace some of today's end-of-the-week New York Times Gordian knot puzzles).
Al would frankly complain to intimates about certain unnamed puzzle editors whom he thought were too much interested in frustrating solvers than in amusing them.
"Amusing" to Alfio Micci also meant, in a sense, educating solvers and tweaking their minds.  Al would actually instruct people via his puzzles.  He would remind them of literature, music, and public affairs that he thought they might want to recall and run over in their minds.
He knew that puzzle solvers would rather relive what the words in the grid stand for.  The words are not mere pen scratches, latter-day "runes," or the result of laborious Google searches for the name of a rock group "whose No. 1 song is . . . ?"
I mean, who cares?
Thanks so much again, Al, for this lovely tribute to Alfio Micci.

And now for the sneak peek:  Next week there will be an end-of-year surprise—a fascinating interview with another legendary pre-Shortzian constructor!  Another litzing contest, with new prizes and a different award structure, will be held in Jaunary; later in 2013, I plan to construct a 23x metapuzzle related to the Maleska-edited New York Times crosswords.  If this metapuzzle is a success, I may construct Will Weng and Margaret Farrar metapuzzles as well.  We'll have to see what 2013 has in store for us. . . .

I've selected one of Alfio Micci's finest pre-Shortzian puzzles to feature today, "Verbal Hi-Jinks."  "Verbal Hi-Jinks" was originally published on November 16, 1980, and was litzed by Barry Haldiman (or one of his former litzers).  It features eight symmetrically interlocking theme entries that must literally be inferred from their clues.  For example, the clue "WORL" leads to WORLD WITHOUT END [WORLD minus its end, "D"].  Other brilliant theme clues include "1,000,1000" for ONE IN A MILLION, the word "APPLAUSE" on top of a fraction bar on top of a picture of a punching fist for HAND OVER FIST, and

for "SQUARE DEALS."  The nonthematic fill is solid and includes many good entries that rarely appear in crosswords, such as CUSTARDS and COWERED.  Overall, this is a phenomenal puzzle (though a nightmare for typesetters and litzers!).  The answer grid (with highlighted theme entries) can be seen below: 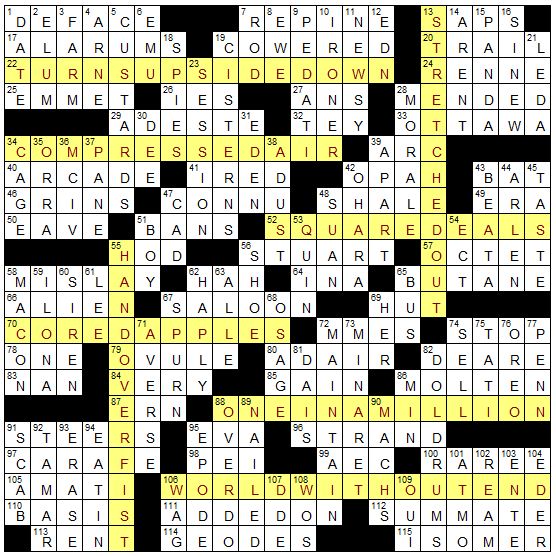 For the clue of the day I decided to count just how many music-related clue/entry pairs Alfio Micci included in the featured puzzle:

The six music-related clues almost form a mini-theme of their own!  Usually puzzles without music-related themes have one or two clues related to music, so having six of them in one puzzle is amazing.  Bravo, Alfio!  Below is a picture of an AMATI violin:

Posted by David Steinberg at 9:11 AM