Just minutes after the last blog post was published, Howard Barkin sent 21 more puzzles, putting us over the 6,900 mark on the litzing thermometer and himself in first place in the litzing contest.  But not for long—by Sunday night, Mark Diehl had reclaimed first place and put us over the 7,000 mark!  (Coincidentally, just two days before, on January 18, Deb Amlen reported in Wordplay that the 7,000th daily puzzle edited by Will Shortz had just appeared!)  Since Sunday, though, we've blown 7,000 out of the water—the litzing thermometer now reads 7,203, and we're sending out packets from mid-1974.

As I write this, Howard Barkin is in first place with a total of 227 litzed puzzles since January 1!  Mark Diehl is at 212, but I have a feeling he'll regain his lead soon!  Jeffrey Krasnick continues to hold a solid third place, with a total of 121 litzed puzzles, and Denny Baker, with 77, isn't far behind.  The remaining litzers who've sent in puzzles in January have litzed 217 puzzles all told, so each and every puzzle definitely helps!  Thanks, everyone, for making this contest such a success so far!

In other news, Barry Haldiman recently volunteered to help track down missing and illegible puzzles.  Although ProQuest is supposed to have everything, it doesn't, and sometimes what it does have is impossible to read.  Barry has done an outstanding job of tracking down 21 puzzles and/or solutions so far on the microfilm at his library (which is a lot better than the microfilm here!) and will be working on finding the remaining problematic puzzles.  Below is a picture of an almost completely illegible solution from ProQuest—there's no way anyone could litz this puzzle's solution without solving it (or possibly hunting it down in a book, though the puzzles in books aren't always exactly the same as the originals): 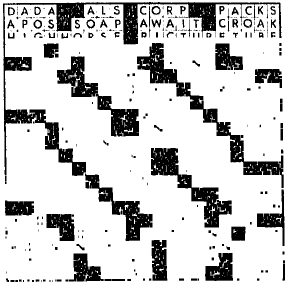 Thanks so much for helping with this, Barry!

Today's featured puzzle is another Jordan S. Lasher masterpiece.  This Maleska-edited puzzle was originally published on April 1, 1977, and was recently litzed by Barry Haldiman.  The theme entries UPPER LEFT TO/BOTTOM RIGHT and READ THE DIAGONAL are clued as "Diagonal course" and "How to get this puzzle's absurd message," respectively.  The letters on the diagonal starting at the first square read WE FOOLED YOU HA HA.  I find it amazing how the diagonal message perfectly intersects READ THE DIAGONAL—it must have taken hours to get the wordings of both phrases perfect so that they could cross like this!  Even with both horizontal and diagonal constraints, the constructor still managed to include some lovely entries in the nonthematic fill, such as MAN TRAP, CURE-ALL, and NONSTOP.  I have yet to see an IYNX ("Wry-necked woodpecker") on its GENU ("Knee: Lat.") playing STH. ("Bridge seat: Abbr.") on the ALPH ("Xanadu's river"), but nevertheless, this is a phenomenal pre-Shortzian puzzle!  The answer grid, with highlighted theme entries, can be seen below: 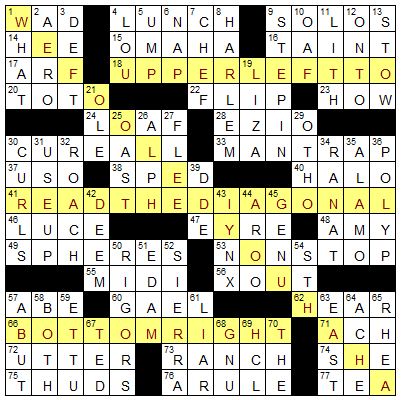 Today's featured pre-Shortzian entry is FUZZY-GUZZY.  FUZZY-GUZZY originally appeared in the September 26, 1976, Will Weng–edited crossword by . . . you guessed it, Jordan S. Lasher!  According to the Ginsberg database, this bizarre entry has never been reused in a Shortz-era puzzle.  I'd be surprised if FUZZY-GUZZY showed up in any other pre-Shortzian puzzles because of its challenging letter pattern and relative obscurity (FUZZY WUZZY, just one letter different, is much more well-known)!  FUZZY-GUZZY was clued as "Balsamweed"; Webster defines fuzzy-guzzy as "a balsamweed (Gnaphalium Obtusifolium) with glandular villous stem."  Below are two pictures of fuzzy-guzzy: 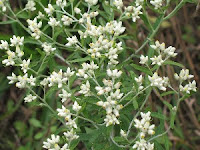 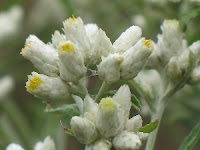 Images courtesy of StillwaterWoods.net
Posted by David Steinberg at 9:38 PM