Last week's review by Rex Parker and Matt Gaffney of a pre-Shortzian puzzle was a big hit!  Thanks again, Rex and Matt, and thanks to everyone who stopped by (and especially to those of you who left comments)!

This week I'm thrilled to present a fascinating interview with Arthur Schulman, a prolific pre-Shortzian constructor and cognitive psychologist who (according to still-incomplete records) published 80 New York Times puzzles in the pre-Shortz era and 1 under Will Shortz's editorship.  To read the interview, click here or on the Pre-Shortzian Constructor Interviews tab above; to read "The Art of the Puzzler," the very interesting book chapter he mentions in the interview, click here.

During the course of this interview, I learned that Arthur's first published puzzle in The New York Times appeared when he was 18.  I wrote to Jim Horne about this discovery so he could update the teenage constructors page on XWord Info, and he contacted Will Shortz, who originally began tracking these data.  So we now have a new entry for the record books:  Arthur Schulman was the 21st-youngest constructor to publish a crossword in The New York Times!

In other news, on Sunday veteran litzer Denny Baker sent in a packet that put us over 8,800 on the litzing thermometer, and we've received so many packets this week from other litzers that we're now almost at 8,900!

Also, the proofread 1984 puzzles are now up on Xword Info—that makes 10 years of pre-Shortzian puzzles that are now available on Jim Horne's wonderful site!

The Pre-Shortzian Puzzle Project received some more publicity this past week connected with the review by Rex Parker and Matt Gaffney:  Rex wrote about it here on Rex Parker Does the NY Times Crossword Puzzle, Matt mentioned it here on Facebook, and T Campbell discussed it here on Amy Reynaldo's Diary of a Crossword Fiend.  Several people tweeted about it as well, including Jeffrey Krasnick, Brendan Emmett Quigley, and Ben Tausig.  Thanks, everybody!

Today's featured pre-Shortzian puzzle was constructed by . . . (drumroll, please) . . . Arthur Schulman!  It was originally published on March 29, 1975, and was recently litzed by Howard Barkin.  This impressive 74-word themeless features a host of zippy entries such as SQUEEGEE, JAVA MAN, and METHANOL.  Oh , and I forgot to mention that the puzzle is a pangram—wow!  I've seen many fine William Lutwiniak pangrams from around this time period, but they've all had relatively closed-off grids with 76 or 78 words.  Another noteworthy feature of this puzzle is its relative absence of obscurity and crosswordese.  The crossing of HAKIM (clued as "Moslem judge") and KOP (clued as "African hill" instead of as "Keystone Kop") would've left me 41-Down, but the rest of the puzzle is very clean.  All in all, this is an exceptional Will Weng–edited themeless—I very much look forward to seeing the remainder of Arthur Schulman's puzzles as they get litzed!  The answer grid can be seen below: 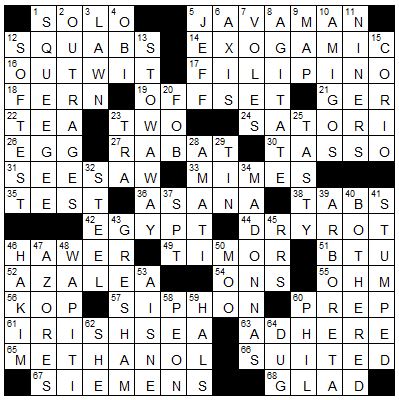 On March 22, the entry of the week was the Norwegian town HAMMERFEST, which I thought sounded awesome but probably wouldn't be showing up a New York Times crossword again anytime soon.  Imagine my surprise when I was solving Julian Lim's Wednesday puzzle this week and saw the clue "Hammerfest's locale: Abbr." for NOR!  I wonder if this clue was written by the constructor or by Will Shortz himself—either way, I was delighted and had no trouble filling it in!

So this week I'm featuring another amazing-sounding city, HÄMEENLINNA.  HÄMEENLINNA was originally used in the January 13, 1973, puzzle (author unknown), which was recently litzed by Mark Diehl.  It was clued as "City in Finland"; Britannica mentions that Hämeenlinna's name was derived from the Häme castle and became the northernmost terminus of Finland's first railroad in 1862.  I look forward to seeing if "Hämeenlinna's locale: Abbr." shows up as a clue for FIN in the near future—that would be awesome!  For now, below is a picture of the Häme castle:

Posted by David Steinberg at 5:47 PM