Bernice Gordon Interview, Over 9,000, In 1969, Marbles Tournament, and Pre-Shortzian Stumpers

Today I'm delighted to present another interview with a pre-Shortzian constructor, the amazingly creative and prolific Bernice Gordon!  At 99, Bernice is the oldest constructor in the history of The New York Times; according to my (incomplete) records, she published 112 puzzles in the pre-Shortz era and has published 18 under Will Shortz's editorship, but she reportedly has published more than 150 puzzles in the Times.  To read my interview with Bernice Gordon, click here or on the Pre-Shortzian Constructor Interviews tab above.

I'm also thrilled to announce that we've now litzed more than 9,000 puzzles!  On Sunday, Todd McClary sent in a batch that put us over 8,900, and then, in very short order, more puzzles came in—including a batch of 34 from Mark Diehl—that put us over 8,950!  Finally, on Wednesday, Martin Herbach sent in five batches totaling 35 puzzles, putting us well over 9,000!  Thanks so much, everybody—great job!

We also reached another milestone this week:  On Tuesday, litzer Nancy Kavanaugh received the first batch of 1969 puzzles!  Here's a representative photo from that very eventful year.  It's of astronaut Buzz Aldrin walking on the Moon during the Apollo 11 mission, which, on July 20, 1969, landed the first humans there:


Although there won't be any pre-Shortzian puzzles to solve, I wanted to help spread the word about this weekend's Marbles 5th Annual Crossword Tournament at various locations throughout the country.  This should be a very fun event, and litzer Doug Peterson and I will be judges at the one taking place in Sherman Oaks, California!

Finally, if you haven't checked out the Pre-Shortzian Stumpers on Twitter, many of the previous stumpers are listed there under #psstumpers.  Litzers Jeffrey Krasnick, Martin Ashwood-Smith, and Denny Baker have come up with some doozies, and I'm sure there'll be more to come!

Today's featured puzzle was constructed by the legendary Bernice Gordon.  As Bernice mentioned in her interview, this puzzle caused something of a controversy—in fact, Margaret Farrar initially rejected it!  The puzzle, titled "Words and Words," was published on May 30, 1965.  It features ten common phrases containing a word, AND, and then another word; the catch is that AND is squeezed into a single square, making this puzzle the earliest Sunday rebus I've seen so far.  This puzzle is way ahead of its time thematically—Sunday rebus themes didn't catch on until much later during the Maleska era!  In addition to using a completely innovative theme, Bernice also chose a wide-open grid and did a lovely job filling it.  Some highlights of the nonthematic fill include RASPBERRY, CONDUCTOR, QUAKING, and AESTHETES, but perhaps the most interesting/unusual entry is ODTAA.  At first, I thought it had to be a mistake—litzers have found several errors in the solutions to Times puzzles recently.  But ODTAA, clued as "Masefield novel, 1926," is indeed a legitimate entry.  My first thought was that the title had something to do with TAA, a piece of pre-Shortzian crosswordese commonly clued as "Chinese pagoda"; I couldn't have been more wrong, however—ODTAA is an acronym for "One Damn Thing After Another!"  In sum, this is a very futuristic and creative pre-Shortzian puzzle!  The answer grid (with highlighted theme entries) can be seen below: 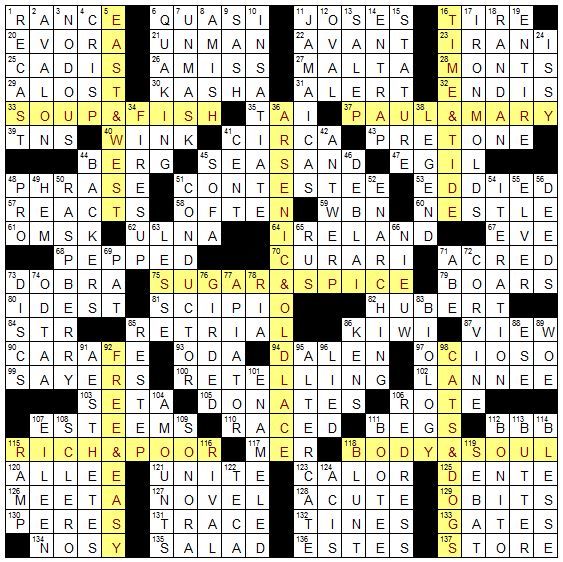 A few months ago, one of our proofreaders came across a very clever clue in the Maleska-edited Saturday, June 7, 1986, puzzle, constructed by Irene Smullyan.  The clue, for the entry SMASHED, was "Under the alfluence of incohol."  This clue, like the featured puzzle, feels way ahead of its time—both are exceptionally clever!  Below is a picture of SMASHED in a different sense of the word:

Posted by David Steinberg at 6:01 PM