This week I'm thrilled to present a wonderful interview with pre-Shortzian constructor and author Mel Rosen!  Mel has published hundreds of puzzles, and according to my (still incomplete) records, 26 of his crosswords appeared in The New York Times during the pre-Shortz era and 10 under Will Shortz's editorship.  He is also the author (with Stan Kurzban) of The Compleat Cruciverbalist, which was later revised and became the classic Random House Puzzlermaker's Handbook.  To read my interview with Mel Rosen, click here or on the Pre-Shortzian Constructor Interviews tab above.

There's lots of news this week!  First, we're now almost in the Margaret Farrar era.  Many Will Weng–edited puzzles being sent out now for litzing continued Margaret's style of putting periods at the ends of clues.  Although adding in the periods makes litzing a bit trickier—to my knowledge, no one has discovered a way to automate this process in Crossword Compiler—it quickly becomes habitual.  The periods after clues will continue all the way back to 1942, so we have lots of time to get used to them!

We've now litzed more than 9,200 puzzles!  This was an amazing week in litzed-puzzle submissions, starting off with a batch of 21 puzzles from Mark Diehl on Saturday.  On Sunday, Martin Herbach sent in 35 puzzles, which put us over 9,100, and then Mark sent in another 14.  Finally, on Wednesday Martin sent in another 35 puzzles, putting us over 9,200!  In between these large batches, other litzers continued sending in packets of 7, which all added up to a huge increase from our total at the end of last week—almost as if we were running another litzing contest (which, by the way, will be coming this summer!).  Thanks so much, everybody—great, great job!

Mark Diehl also reached an amazing milestone this week in his personal litzing total, having digitized more than 2,500 puzzles!  That's also more than 15 percent of the entire pre-Shortzian puzzle canon!  Congratulations and thanks again, Mark—maybe this will eventually go down in the Guinness World Records!

This week Martin Herbach also sent me an e-mail about a litzing script he wrote for use with .txt files.  Here's his description of it—if you'd like more details, please contact him (or me, and I'll forward your e-mail):


I don't know how many people give you Across Lite source (.txt) files, but I just wrote a script that automates a bit of the work.  Editing the clues is still the labor-intensive step, but I build the clue file in Notepad (which automatically deals with smart quotes), including clue numbers and the script scans a directory for clue files of the form nytyymmddclues.txt and turns each one into nytyymmdd.txt, stripping the clue numbers and adding the rest of the tempate.  It uses the date from the filename for the template header, including correct day of week.

It's not very user friendly but if you think anyone would want to use it, I'll provide further info.

A couple of other announcements:  Last weekend, Marbles:  The Brain Store's 5th Annual Crossword Tournament took place at various locations around the country, and litzer Doug Peterson and I were judges at the one in Sherman Oaks, California.  It was a lot of fun, with great puzzles and plenty of yummy popcorn, and litzer Todd Gross was one of the contestants!  Here's a picture of Doug, Todd, and me at the tournament:


Finally, the Puzzazz Year of Puzzles has begun, and litzer Parker Lewis built the very first one, which came out last week.  I took a break from studying for AP tests to do his double spiral puzzle and had a blast!  There'll be a metapuzzle to solve at the end, and I'm already looking forward to the next installment, which will be by Patrick Berry!  To find out more about the Puzzazz Year of Puzzles, click here.

Today's featured puzzle, "Fuller Explanations," was constructed by Mel Rosen and edited by Will Weng.  It was originally published on July 13, 1975, and was recently litzed by Howard Barkin.  In this "reversed-out" puzzle, a piece of pre-Shortzian  crosswordese is used as a clue and its typical definition as an answer for each of the twelve theme entries!  For example, the clue "Orts" leads to TABLE SCRAPS, and the clue "Amah" leads to ORIENTAL NURSE.  I'm amazed that Mel was able to get all these definitions to interlock so nicely with (drumroll, please) so little crosswordese in the nonthematic fill!  Instead, he used lots of fun pieces of fill, such as GONDOLA, GOES FAR, and PREENED.  On top of all that, Mel even managed to sneak his own name into the grid at 18-Down (clued as "Allen or Brooks" rather than "Allen or Rosen").  All in all, this is a very innovative pre-Shortzian puzzle with an interesting, original, and humorous theme!  The answer grid (with highlighted theme entries) can be seen below: 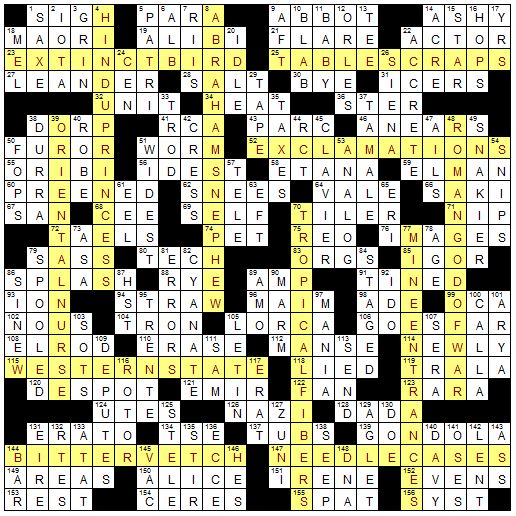 Today's featured pre-Shortzian entry is LOXODROMIC.  LOXODROMIC originally appeared in the Will Weng–edited July 29, 1972, puzzle (constructor unknown), which was recently litzed by Mark Diehl.  Not surprisingly, the Ginsberg database shows that LOXODROMIC has never been reused in a Shortz-era puzzle!  The original clue for LOXODROMIC was "Of map-projection lines"; Webster defines it as "Relating to a rhumb line or to sailing on rhumb lines."  It defines a rhumb line as "a line on the surface of the Earth that follows a single compass bearing and makes oblique angles with all meridians."  In my book, both loxodrome and rhumb line are a mouthful—then again, I doubt I'll be using either of these terms anytime soon!  Below is a picture of some loxodromes/rhumb lines:

Posted by David Steinberg at 5:34 PM