Great news:  The proofread 1983 puzzles are up on XWord Info, and we're now busy proofreading 1982!  As more and more pre-Shortzian puzzles have been uploaded, Jim Horne has continued to expand the "Selected pre-Shortz observations" section of XWord Info.  He now has lists of the pre-Shortzian rebus puzzles, fewest and most block records, asymmetrical puzzles, pangrams, most common entries (and most common entries unique to pre-Shortzian puzzles), Sundays by title, and constructors!  I encourage everyone to check out these awesome lists (which are rapidly expanding)—to do so, just scroll down to the bottom of the main page of XWord Info.

This week a whopping 178 more puzzles came in, putting us over 9,800!  Early Saturday, Mike Buckley sent in 7 Will Weng–edited puzzles that had periods after the clues for the daily puzzles.  In his e-mail, Mike quipped, "Should we call them 'period pieces'?"  Saturday night, Howard Barkin sent in 21 puzzles, followed a short while later by 35 more puzzles from Martin Herbach.  On Sunday, Jeffrey Krasnick sent in 7; later that night, Mark Diehl sent in 14, putting us over 9,700!  Monday evening, Todd McClary sent in 7 puzzles, which were followed on Tuesday by 7 from Denny Baker.  On Thursday, Barry Haldiman sent in 7, Martin sent 35 more, and then late that night, Mark sent in another 34 puzzles, putting us at 9,799 and his own personal total at more than 2,700!  I added in 4 of my own, so we're now at 9,803!  Thanks so much, everyone—terrific job!

We're also now in 1967, another tumultuous year.  Here's a graphic representation of the hippie counterculture movement during the Summer of Love, which, according to Wikipedia, was "a social phenomenon that occurred during the summer of 1967, when as many as 100,000 people converged on the Haight-Ashbury neighborhood of San Francisco, initiating a major cultural and political shift":


In other news, I'm thrilled to announce that daily puzzle authors have returned!  We've had a long spell with next to no daily puzzle authors, but this morning I sent out 10 packets from 1967 that almost all included the daily puzzle authors.  It's been a bit disheartening having to list the authors for so many puzzles as "Unknown," so I'm really glad those data are available again for a good percentage of the Farrar dailies!

Jim Horne noticed that there are already 115 pre-Shortzian puzzles by Albert J. Klaus.  I was able to dig up an obituary for someone by that name in Florida but haven't been able to find any other information about him.  If anyone remembers anything about this very prolific constructor, please let me know.

I'm really excited about Peter Gordon's Kickstarter campaign for Fireball Newsweekly Crosswords!  I already subscribe to Fireball Crosswords and like them a lot—they're always really interesting and challenging puzzles.  So when I found out about this new venture, which will feature 20 current events crosswords in which many puzzle answers will be taken from current news, I signed up right away!  I'm even more interested in this Fireball project because one of the things I like best about the pre-Shortzian puzzles of the Farrar era is that many of them reflected events and attitudes from the times in which they were written.  I've gotten something of an education from them, and I'm looking forward to learning more about current events in the most fun way possible—through great crossword puzzles!

Today's featured puzzle, titled "Arithmetricks," was constructed by Alfio Micci and edited by Will Weng.  It was originally published on October 3, 1971, and was recently litzed by Mark Diehl.  This exceptionally unusual puzzle features twelve symmetrically interlocking math problems!  The symbols (+, –, x, and ÷) actually appear in the grid, and the clues for these math problems are the answers.  For example, the clue "4" leads to SEVEN – THREE; similarly, "1/2" leads to SIX ÷ TWELVE.  I like how deceptive this gimmick is—even after a solver figures out that the theme entries are all elementary math problems, there's no way to know exactly what the problem will be (or even which operation will be used) until some of the crossings are filled in.  I also like that some of the multiplication signs read as ordinary x's—this not only allowed the constructor to get all the theme entries to interlock symmetrically but also added a fun new twist to an already wacky puzzle!  This puzzle exemplifies Will Weng's willingness to push the envelope and publish gimmicks that might not be universally well received.  I wouldn't be surprised if Weng got piles of letters from traditionalist solvers complaining that the gimmick didn't fit the definition of a crossword puzzle, as Margaret Farrar did when she published Bernice Gordon's novel ampersand rebus.

I have to admit that the nonthematic fill in this off-the-wall masterpiece is a mixed bag.  Some of the highlights include ERSATZ, SHRIEKS, CHARLOTTE, HOGGED, and ENCHANT.  The puzzle does have its share of iffy abbreviations and "mystery" entries, though, such as TRS (clued as "Train rails: Abbr."), GOSE ("Japanese town"), UINAL ("Mayan month"), TULU ("Dravidian Indian"), NHANG ("Tai people"), and OASI ("Insurance abbr.").  Even though this puzzle has some questionable fill, it's certainly one of the most interesting pre-Shortzian puzzles I've seen so far!  The answer grid (with highlighted theme entries) can be seen below: 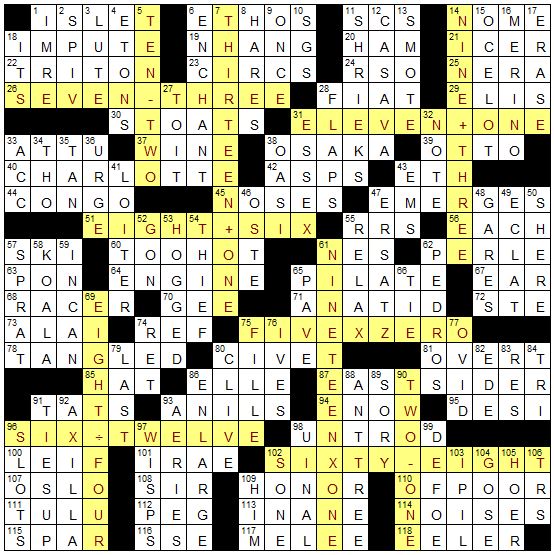 I've been keeping track of the most clever clues that have jumped out at me as I've looked through the Will Weng–edited puzzles.  Here's an octad of my favorites:

Unfortunately, I haven't been seeing as many clever clues as we continue back into the early Weng/late Farrar times.  Litzer Jeffrey Krasnick remarked in an e-mail, "I guess clever clues are now a thing of the past (or future)."  There are certainly a handful of gems from the early days, though.  If you've come across any other clever early Weng/Farrar clues, please comment!  Below is a picture of some breath unfresheners:

Posted by David Steinberg at 4:23 PM