We've now litzed more than 9,900 puzzles!  On Sunday, Todd Gross sent in 7, followed by 14 from Nancy Kavanaugh and 7 from Denny Baker.  Then Monday, Martin Herbach sent in another five batches totaling 35 puzzles, followed by 42 (probably the largest puzzle shipment ever!) from Mark Diehl, who put us over the 9,900 mark on the litzing thermometer!  Thanks so much, everybody—it won't be long before we're at 10,000!  (Incidentally, at least one litzer has told me he's hoping to be the one to put us over that milestone—it will be interesting to see who ultimately does it!)

The proofreading is also progressing—on Thursday I received a month of proofed puzzles from Tracy Bennett.  Many thanks again, Tracy!

Tomorrow is June 1, and we now have a new Litzer of the Month:  Martin Herbach!  As I've written about before here,  here, and here, Martin has devised a very effective and fast way of using optical character recognition (OCR) to litz.  Lately he's been sending in batches of 35 puzzles at a time in rapid succession, though recently some subpar PDFs of puzzles have slowed this process down a bit and necessitated manual litzing.  Luckily the poor-quality PDFs are relatively few and far between—there doesn't seem to be any correlation between a puzzle's original publication date and the PDF's clarity.  To read more about Martin, click here or on the Litzer of the Month tab above.

If you haven't read Jim Horne's informative and entertaining 2013 XWord Info Press Conference yet, click here to take a look (and see the mention of the Pre-Shortzian Puzzle Project—thanks, Jim!)!  (I really wonder what got lost due to "technical issues" in those 26-minute initial remarks!)

Last week I wrote about Peter Gordon's Kickstarter campaign for Fireball Newsweekly Crosswords.  As of today, this promising project has reached more than 50% of its funding goal, and there are still 15 more days left to back it!  I have to admit, I was concerned last week when I saw how much more funding was needed, so I increased my pledge (and am looking forward to receiving a cool Fireball Crosswords baseball cap in addition to all the great puzzles!).  Increasing pledges is really easy on Kickstarter—you just log in, go to the project page, and click on "Manage Your Pledge."  Then you type in the amount of your new pledge (which isn't added to your previous pledge—the revised pledge is the total amount you'll be charged if the Kickstarter campaign succeeds).  If you'd like to increase your pledge or learn more about Fireball Newsweekly Crosswords and how to pledge, click here.

My list of funny typos is getting longer and longer, so I thought I'd include a few of the best today:

Today's featured puzzle (constructor unknown) was originally published on March 24, 1972.  It was edited by Will Weng and recently litzed by Mark Diehl.  As I've continued to review litzed packets of puzzles from the early 70s and late 60s, I've come across many daily puzzles with repeated-word themes.  Some of them have impressive theme entry interlock, but ultimately, the vast majority aren't interesting enough to feature.  This innovative puzzle puts a novel twist on the traditional repeated-word theme—it contains four arrangements in which a theme entry containing the word BUTTER appears to be on top of a theme entry containing BREAD!  The puzzle works on many levels:  The BREAD and BUTTER theme entries are the same length and feel in-the-language, the BUTTER entry is always above or to the right of the BREAD entry, and the theme entries are arranged symmetrically in a pinwheel formation.  In addition, the fill is exceptionally clean—an extraordinary feat, considering that the theme entries are stacked on top of each other!  I especially like the entries DAINTY, DICTATE, SHUSH, and CRUSH!  Among the very few not-so-great entries are ARCT (clued as "North: Prefix"), SIRUP ("Pancake coating: Var." [have you ever seen this spelling outside of crosswords?]), and ASHAKE ("Trembling").  Nevertheless, this daily puzzle is a tour-de-force—the constructor clearly knew which side his solvers' bread was buttered on!  The answer grid (with highlighted theme entries) can be seen below: 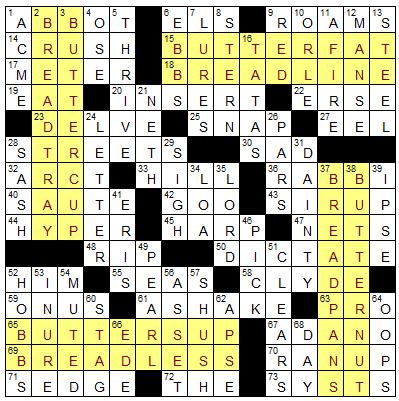 Today's featured pre-Shortzian entry is HELLBOX, which originally appeared in the November 28, 1970, crossword (constructor unknown).  This puzzle was edited by Will Weng and recently litzed by Denny Baker.  According to the Ginsberg clue database, HELLBOX has never been used in a Shortz-era puzzle.  This unusual entry was clued as "Printer's trashcan"; Webster defines it as "a receptacle into which a printer throws damaged or discarded type material."  The printing industry has lots of bizarre slang—I'll be featuring another typographical oddity next week!  For now, below is a picture of a hellbox:

Posted by David Steinberg at 7:47 PM