The winner of last week's "A Challenge from the Army" contest was litzer Doug Peterson!  Doug correctly solved the puzzle and will receive a free Puzzazz e-book of his choice—congratulations, Doug!  There were six other correct entries submitted, along with some incorrect or incomplete ones, and everyone seemed to enjoy this pre-Shortzian challenge.  Thanks again to Jim Horne for hosting the puzzle on XWord Info and to Roy Leban for donating the Puzzazz e-book!

An interesting note about this puzzle is that there was an error in the Times's published solution to the grid.  The incorrect entries were DEEIDE/SEAT, which I changed to DECIDE/SCAT.  All submitted contest entries contained DECIDE/SCAT—the correct solution appears below: 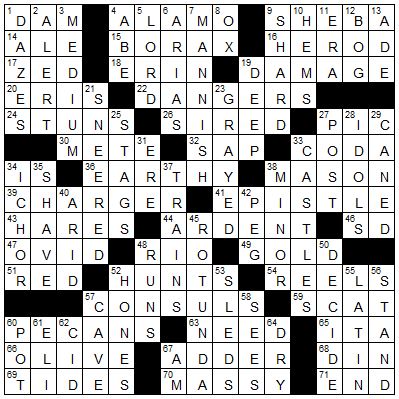 Also, Jim Horne wondered whether it might be possible to track down Privates Laurence D. Perrine and Henry F. Holbrook after all these years.  Although I wasn't able to find anything about Henry F. Holbrook, I did find a Wikipedia page about a Laurence Perrine (1915–1995), who was a professor of English Literature at Southern Methodist University and, according to Wikipedia, "the basis for the fictitious poetry textbook author J. Evans Pritchard in the movie Dead Poets Society."  He was also known for his books of limericks.  I don't know whether this was the same Laurence Perrine, but he may well have been.

On the litzing front, we had a phenomenal week—186 more puzzles came in!  Last Friday, right after the post went up, Mark Diehl sent in 19, putting his litzed total at more than 2,600!  Then on Saturday, Denny Baker sent in 7 puzzles, followed on Sunday by 7 from Todd McClary and 35 from Martin Herbach, who put us over 9,500!  On Monday, Mark sent in 34 more puzzles, and Denny sent in 7 more.  Then on Tuesday, Martin sent in 35 more, followed by 7 on Wednesday from Todd Gross and 7 from Jeffrey Krasnick.  Thursday Joe Cabrera sent in 7, putting us over 9,600!  Finally, Thursday night Mark sent in another 21!  This is certainly way up there with the totals during litzing contests—awesome job, everybody!  It won't be long before we're at 10,000!

Today's featured puzzle, whose constructor is unknown, was originally published on October 31, 1972.  It was edited by Will Weng and was recently litzed by Mike Buckley.  This tour de force is relatively light on theme entries, but the ingenuity of the theme and the wide-open grid certainly make up for it.  The two main theme entries are APPLE TURNOVERS and UPSIDE-DOWN CAKE—the catch is that both these entries are INVERTED and read from top to bottom!  Reversing the direction of particular grid entries is a theme that has grown and developed throughout the pre-Shortzian and Shortz eras (such as in this puzzle featured a few months ago).  I have yet to see an earlier example of theme-entry reversal.  Anyway, this puzzle's mild theme density allowed the constructor to include many fresh and lively entries in the nonthematic fill—some of my favorites include TRES BIEN, TAKES ON, EXEMPTS, and CATER TO!  I'm not as fond of the four six-letter-plus partials (SAIL ON O, A RAGE TO, AUTO DA, and A SENSE); nevertheless, I'm sure solvers enjoyed this tricky treat on Halloween 1972 just as much as I did on May 17, 2013!  The answer grid (with highlighted theme entries) can be seen below: 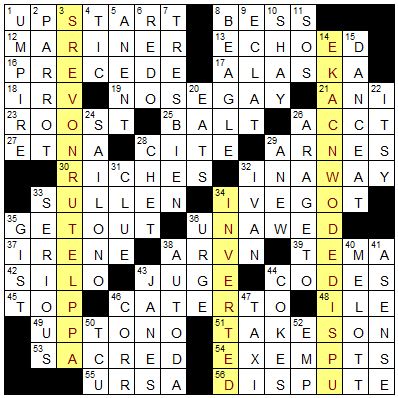 Today's featured pre-Shortzian entry is PHANTASMAGORIAL, which, according to the Ginsberg database, has never been reused in a Shortz-era puzzle.  PHANTASMAGORIAL originally appeared in the March 24, 1971, puzzle (constructor unknown), which was edited by Will Weng and recently litzed by Jeffrey Krasnick.  The clue for PHANTASMAGORIAL was "Like some dreams"; Webster's online dictionary does not contain a definition for this word.  It seems that The New York Times might have been in error—accepted forms of the adjective are limited to phantasmagoric and phantasmagorical.  My Webster word list in Crossword Compiler contains phantasmagorial; regardless, the clue for this entry should have at least contained a variant tag.  In any case, the primary definition of a phantasmagoria is "an exhibition of optical effects and illusions."  Its derivation can be traced back to the French roots fantasme and agorie.  Webster mentions that agorie might come from the Greek agora, a repeater in both pre-Shortzian and Shortz-era crosswords!  Below is a picture of a phantasmagori(c)al fractal:

Posted by David Steinberg at 7:43 PM