Fast Start for Litzstarter, 1981 Puzzles Up, In 1963, and September Litzer of the Month Andrew Laurence

It's been a fast start for Litzstarter—in just six days, we've litzed more than 200 puzzles!  (To see litzers' contest totals, click here or on the Contest Totals tab above.)  Very early on Sunday, September 1, C. G. Rishikesh (Rishi) sent in the first 6 puzzles of the litzing contest.  Sunday afternoon, I received an e-mail from Ed Sessa, who said he'd decided to give litzing a try—welcome, Ed!  A few hours later, Jeffrey Krasnick sent in 14 puzzles; these were followed by 7 from Denny Baker.  Sunday night, Tracy Bennett sent in a month of proofread puzzles.  Early Monday, Rishi sent in one more litzed puzzle, and a few hours later, Jeffrey sent in another 7.  Monday afternoon, Nancy Kavanaugh sent in 14, which were followed by 7 more that evening from Denny.  A bit later, Todd Gross sent in 11 proofread puzzles from 1980, and just a few minutes later, Howard Barkin sent in 7 more litzed puzzles.  Then Tuesday morning Mark Diehl sent in 14 puzzles, which were followed that evening by 7 litzed puzzles from Todd, putting us over 11,100 on the litzing thermometer!  A short while later, Tracy sent in 7 litzed puzzles.  On Wednesday morning, Nancy sent in 14 more puzzles, which were followed that night by 7 more litzed puzzles from Todd and, a few hours later, by 7 more from Jeffrey.  Early Thursday morning, Mark sent in 21 more puzzles.  Then around lunchtime, Nancy sent in 14 more, which were followed that evening by 7 from Todd McClary.  Just a few minutes later (22, to be exact!), Howard sent in 14 more, putting us over 11,200 on the litzing thermometer (and his own regular total at more than 700!)!  Very early Friday morning, Mike Buckley sent in 7 puzzles, then later Mark sent in 13 more (putting his regular total at more than 3,400!).  A short while later, Todd sent in 10 more proofread puzzles.  And here at Litzer Central, we've been litzing puzzles as time permits to help move us along even faster to 13,000!  As I write this, we're at 11,232 on the litzing thermometer—well on our way to meeting our goal!  Awesome work, everybody—thanks so much!

Great news:  The proofread 1981 puzzles are now up on XWord Info!  We've already proofread a couple of months in 1980, so those should be ready in the not-too-distant future.

We're also now in 1963, a year most people who were alive then remember for the assassination of John Fitzgerald Kennedy, our 35th President, on November 22.  I wasn't born yet, but my parents remember vividly where they were when they heard the news, even though it was 50 years ago.  My mom (then in fourth grade!) was living in Paris.  She and my grandparents had just attended a performance by the famous French mime Marcel Marceau and found out as they left the theatre.  My dad was in the living room of his old house in Culver City.  If you remember where you were then, feel free to write about it in the Comments.


We're now also in a new month, and the September Litzer of the Month is BAC Fill (formerly Bay Area Crossword Puzzle Tournament) organizer Andrew Laurence.  BAC Fill takes place this year next weekend (Saturday, September 14)—even though I don't live in the Bay Area, I've been twice before and had a great time!  To read more about Andrew, click here or on the Litzer of the Month tab above.

I always find pre-Shortzian puzzles with topical themes, which I've dubbed buzzles (for buzz and puzzle), to be very interesting.  The most common buzzle theme I've encountered in the late '60s is the Space Age.  Most Space Age buzzles contain just one or two topical entries; this week's featured buzzle, however, really stands out in that it contains six main theme entries with a novel twist!  The buzzle, "Space Madness," was constructed by Eileen Bush; edited by Will Weng; published on June 22, 1969; and litzed by Martin Herbach.  Each of this buzzle's theme entries contains a pun on a space-related term—some of my favorites include CHEESE QUAKE (clued as "Moon eruption, perhaps"), OUT FOR LAUNCH ("Sign on an astronaut's door"), and COSMIC RELIEF ("Humor for serious astronauts," which feels particularly fitting)!  In addition to including a clever theme, the constructor was also able to weave a large number of nonpunny space- and flight-related theme entries into her fill, including GEMINI ("Early astronaut program"), COSMO ("Universe: Prefix"), LEONID ("One of a meteor swarm"), LUNIK ("Soviet moon rocket"), SABRE JETS ("Fighter planes"), SPLASH DOWN ("Dive, astronaut style"), GLENN ("Early astronaut"), ASPERA (which has the space-related clue "Ad astra per ___"), and ZOOMS ("Goes like a spaceship").  The nonthematic fill is lovely as well!  I particularly like the entries RENDEZVOUS, CALCULATOR (unusually high-tech for the puzzle's time period), and BELLOWS.  BRELOQUES ("Pendants on watch chains") is a very unusual word, but it sounds awesome!  There aren't any entries that jump out at me as being particularly junky, though KINO ("Cinema, in Europe"), SERS ("Indian weights"), and INDENE ("Oily hydrocarbon") aren't my favorites.  Overall, this is an exceptional buzzle—I look forward to seeing how other major '40s, '50s, and '60s events are portrayed in crosswords!  For now, here's the puzzle (with highlighted punny theme entries): 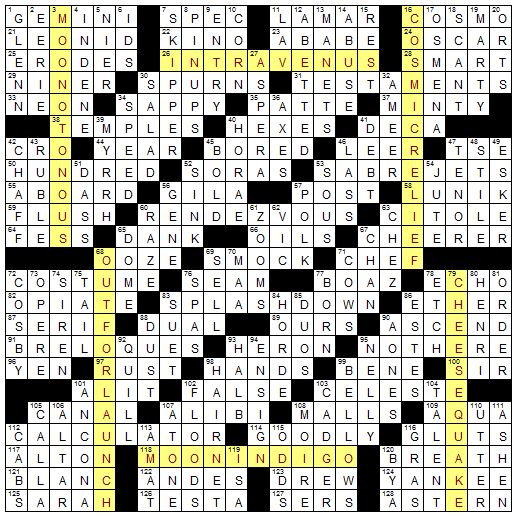 On the subject of the Space Age, here's a pentad of topical space- or flight-related clues I've noticed in other puzzles from the late '60s.  There will be many more Space Age clues highlighted in future puzzles!


The most interesting of these clues is the one for STARFISH—I'd never thought about a starfish in that way!  Below is a picture of this many-armed sea creature:

Posted by David Steinberg at 5:40 PM