This is almost the end of Litzstarter's third week, and we're now at 11,663 on the litzing thermometer!  This past week was phenomenal, with more than 200 puzzles coming in!  Howard Barkin got us off to a fast start for the week on Friday night with 14 puzzles.  A few hours later, C. G. Rishikesh (Rishi) sent in 6 more.  Saturday morning, I received an e-mail from Ralph Bunker, who wanted to start litzing—welcome, Ralph!  A few hours later, Nancy Kavanaugh sent in 18 puzzles, putting her regular total at more than 600 litzed puzzles!  That afternoon, Vic Fleming sent in 7 puzzles.  Very early Sunday morning, Rishi sent 1 more puzzle, which was followed by 7 more from Jeffrey Krasnick a few hours later and then an additional 7 from Denny Baker.  Sunday night, Ralph sent in his first batch of 6 puzzles.  A few hours later, Mark Diehl sent in 35 puzzles, putting us over 11,500 on the litzing thermometer and his own personal total over 3,500!  Early Monday morning, Jeffrey sent in 7 more puzzles.  Tuesday afternoon, Ralph sent in another 6.  That evening, Vic sent in 6, which were followed by 18 more from Mark.  Early Wednesday morning, Mike Buckley sent in 7 puzzles, putting us over 11,600 on the litzing thermometer!  That afternoon, Denny sent in 7 more, and in the evening, Jeffrey sent an additional 7.  Late Thursday morning, Howard sent in 14 puzzles.  That afternoon, Vic sent in 7 more puzzles, putting his regular total at 200 litzed puzzles!  Then early this morning, Mark sent in another 6 puzzles, which were followed late this afternoon by 7 from Tracy Bennett.  Whew—it makes me tired just writing about it!  Awesome job, everybody!

We're now in 1962, a year many people who were children then remember for atomic bomb drills ("duck and cover") in schools during the Cuban Missile Crisis, and many who were adults remember for the death of Marilyn Monroe.  But on a lighter note, 1962 was also a landmark year in the history of late-night television, when Johnny Carson took over as host of The Tonight Show.  Heeere's Johnny!


In other news, Will Shortz recently gave a talk in Minnesota in which, among other things, he discussed the history of American crosswords and told the audience about the Pre-Shortzian Puzzle Project!  Thanks so much, Will!  This very entertaining event, "Will Shortz:  An Evening with the Puzzle Master," was recorded in its entirety and can be seen here or on YouTube:

Also, last Saturday I flew up to Oakland for the 6th Annual BAC Fill, where I saw litzers Mark Diehl, Todd Gross, and Andrew Laurence (who was also the tournament's organizer)!  Here are a couple of photos from this awesome event, which was a ton of fun:

Today's featured puzzle was constructed by Anthony Morse.  It was originally published on January 1, 1955; edited by Margaret Farrar; and recently litzed ahead of schedule at Litzing Headquarters since it's such a standout construction!  This lovely 15 x 15 features a jaw-dropping 18 mostly symmetric theme entries related to bridge, eight of which contain rebus squares with one of the four bridge suits!  The interlock is very elegant—I'm amazed that the constructor was able to work the long down theme entries CUT AND DEAL, DUPLICATE BRIDGE, and TOURNAMENT into the grid so elegantly, despite the constraints posed by the rebus squares.  Also, I love all the short bonus theme entries like SLAM, JACK, and JOKER!  On top of all this, what little nonthematic fill there is is jampacked with Scrabbly letters (surprisingly not to the detriment of the fill's overall quality) and even lively in parts.  My favorite nonthematic entry is SILLABUB (clued as "Frothy mixture of wine and cream.")—although I've never heard of this unusual term, it's a lot of fun to say!  Webster mentions that the primary spelling is actually syllabub, which it defines as "milk or cream that is curdled with an acid beverage (as wine or cider) and often sweetened and served as a drink or topping or thickened with gelatin and served as a dessert."  The etymology of this term is unknown, though it was apparently first used by English writer John Heywood in 1537.  JORUM ("Large drinking bowl") is also a very interesting word, which I erroneously assumed came from Latin.  According to Webster, the most probable etymology is from the Biblical character Joram, who "brought with him vessels of silver" in 2 Samuel 8:10.  Back to the puzzle:  The only nonthematic entry that caused me to raise an eyebrow was A TAR ("Ralph Rackstraw, for instance."), which I would have much preferred to see clued as the variant of attar or even as the Salieri opera.  One could also complain about the plural suffix INGS and the hard-core crosswordese ALATE ("Having wings."), ITEA ("Virginia willow."), AINU ("Hokkaido inhabitant"), and ORLE ("Border of an escutcheon."), but all of these entries (with the exception of INGS) were common in the pre-Shortzian era.  In all, this is an exemplary pre-Shortzian puzzle and a true model for how to squeeze theme entries into a 15 x 15 grid (albeit one that's slightly over the maximum word count)!  I look forward to seeing what other gems constructor Anthony Morse has in store!  For now, here's the solution grid (with highlighted theme entries): 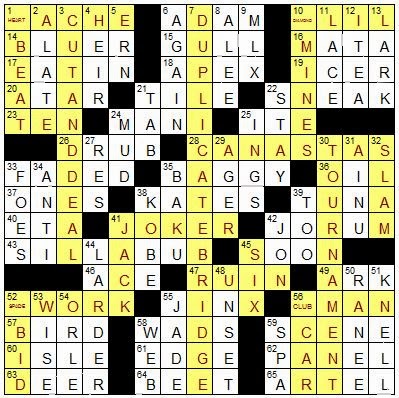 I've seen many iffy entries in pre-Shortzian puzzles, but a handful have stood out to me as being particularly outrageous, thus earning them a nomination in the Pre-Shortzian Puzzle Project's First Annual Bad Fill Razzies, which focuses on 1968, 1969, and 1970!  I've left the specific dates and constructor names off these entries, but all of them appeared in puzzles from these three years:


And the winner for the worst piece of nonthematic fill in 1968, 1969, and 1970 New York Times puzzles is  . . . NO TOENAIL!  This entry and its clue are so contrived (and even a bit gross) that I couldn't help cracking up, which was probably Will Weng's intention!  Below is a picture of some painted toenails, which clearly didn't get trod on:

Posted by David Steinberg at 6:27 PM