Litzstarter Update and a Random Factoid

The second week of Litzstarter is coming to an end, and as I write this, we're at 11,433 on the litzing thermometer—which means that more than 400 puzzles have been litzed in just 13 days!  An hour or so after I posted last week's update, Jeffrey Krasnick sent in 7 more puzzles, which were followed a few minutes later by 7 from Vic Fleming.  Saturday morning, Nancy Kavanaugh sent in 14 puzzles, which were followed a few hours later by 7 from Ed Sessa.  Saturday night, 10 proofread puzzles came in from Todd Gross; a few minutes later, Jeffrey sent in 7 more litzed puzzles, and then Mark Diehl sent in 21 more.  An hour and a half later, Tracy Bennett sent in 7 litzed puzzles, putting us over 11,300 on the litzing thermometer!  Sunday evening, Jeffrey sent in 7 more, which were followed a bit later by 7 from Todd.  Monday morning, Mark sent in 21 more.  Early Tuesday morning, Jeffrey sent in 7, which were followed a couple of hours later by 14 more from Mark (whose contest total came to more than 100!).  Tuesday evening, Nancy sent in 21 puzzles.  Wednesday night, 11 proofread puzzles came in from Todd.  And then Thursday night, Jeffrey sent in 7 more puzzles, putting us over 11,400 on the litzing thermometer and his regular total at exactly 700!  A few hours later, Mark sent in 21 puzzles, and very early Friday morning, another 7 litzed puzzles came in from Todd.  It's been a truly amazing litzing week—great job, everyone!

Last night when Mark sent in his batch of 21 puzzles, he told me about a "random factoid" that made me laugh out loud:  One of the 1963 puzzles had the clue, "Where 140,353 farms are."  How many of you knew the answer for that one off the top of your head?  Not me, that's for sure!  Turns out the answer is OHIO.  I'm sure that figure has changed over the past 50 years, though!

So far, this blog has almost exclusively featured themed puzzles.  But I've also been keeping track of particularly good themeless puzzles I've come across.  Some of my favorite pre-Shortzian themeless constructors are Jack Luzzatto, Joseph LaFauci (whose work will be featured in a future post), and Arthur Schulman.  This week's featured puzzle, which was constructed by crossword legend Jack Luzzatto, edited by Eugene T. Maleska, litzed by Mark Diehl, and originally published on July 23, 1977, may be the best themeless I've seen in the entire pre-Shortzian era!  First off, the 64-word grid Luzzatto chose is lovely—there aren't too many blocks in any one region, and there are just two three-letter entries in the whole puzzle.  On top of that, the grid is jam-packed with both interesting entries and Scrabbly letters!  Highlights in the fill include HOT POTATO, FLEA TRAP, ALKALIZES, MOBILIZES, TAKEN IN, RUN COLD, CYANIDE, and GRAND AMS, but my favorite clue/entry pair has to be "It's in the bag" for GOLF CLUB!  Other interesting longer entries include BY PROXY, ANTIPODAL, SINECURE, and CATHEAD (which I've never heard of).  CATHEAD, which sounds awesome, was clued as "Timber for the anchor"; Webster offers the more complete definition "a projecting piece of timber or iron near the bow of the ship to which an anchor is hoisted and secured."  DARBIES ("Plasterers' floats; trowels"), ENTAL ("Inner, in anatomy"), the partial A BIG, the crazy-hard clue for AMAS ("Japanase women divers"), and the sprinkling of British spellings (ODOUR and LITRE) are the only other things that I would consider not-so-great.  Overall, this tour de force feels many years ahead of its time!  It's not every day you see a pre-Shortzian themeless with such a stunning grid and fill.  I look forward to reviewing many more Luzzatto masterpieces as we head further back into the '60s and then proceed to the '50s!  For now, the answer grid can be seen below: 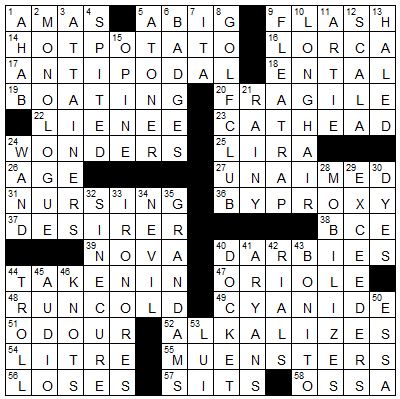 Today's featured pre-Shortzian entry, DESQUAMATE, originally appeared in the February 21, 1968, puzzle (constructor unknown), which was edited by Margaret Farrar and litzed by Todd Gross.  According to the Ginsberg clue database, this unusual entry has never been reused in the Shortz era.  Its original clue, "Scale, as fish," paraphrases the Webster definition, "to peel off in scales."  Webster goes on to mention that desquamate comes from the past participle of the Latin desquamare, meaning "to scale," which ultimately comes from the Latin de (meaning "from") and squama (meaning "scale").  Apparently desquamate can also be used in a medical sense, meaning "to peel off in the form of scales," which is why I decided not to look for a picture of desquamation!  Instead, here's a much more pleasant picture of some fish scales:

Posted by David Steinberg at 4:45 PM