1980 Puzzles Up, Ralph Bunker's "Evolution of a Litzer," and Site Changes

Great news:  The 1980 puzzles are now all proofread and up on XWord Info!  Thanks so much again to proofreaders Todd Gross, Tracy Bennett, and Kristena Bergen, who toil quietly in the background getting the litzed puzzles ready for prime time—and to Jim Horne, for solving technical issues and then posting the puzzles on XWord Info!

This week I'm delighted to feature a piece by litzer Ralph Bunker, who burst onto the scene a quarter of the way through Litzstarter and, using programs he writes, has been able to litz an amazing number of puzzles in a very short period of time.  Here's his article:


Evolution of a Litzer

Phase 1
Printed out puzzles, typed them using only CrossFire.

Phase 2
Did not print out puzzles. Used a second computer to display the clues and answers for a puzzle side by side.

Phase 3.
Got tired of typing in the title, author and copyright and not being able to hit return to get to next line of grid in CrossFire, so I wrote a program to overcome thiese annoyances. I copied the email David sent with the one line descriptions of the puzzles to a text editor and typed the grid under each line, getting something that looked like this:

Note: every such warning was actually an error. All puzzles that I have entered are square and symmetric.

5. Analyzed the grid to determine clue numbers.
6. Generated an empty clue for each across and down answer.
7. Produced an XML file that could be read by CrossFire.

Phase 4.
Got tired of switching back and forth between entering a month's worth of grids in a text editor and then using CrossFire to enter the clues, so I asked David for a year's worth of puzzles. I spent a couple of days entering all the grids, then spent the rest of the time entering the clues.

Note: Maybe people without construction software could enter the grids and somebody else enter the clues.

Phase 5.
When I type clues I find the clue on the computer displaying the puzzles, then type in the clue looking at the screen because that is how I am used to typing when I program. This allows me to verify that the clue and the answer make sense together. However, sometimes I get into a zone where I am just typing clues and when I do a pass through the clues on completion of a puzzle, there are answers that I have no recollection of seeing. This concerns me, so I wrote a program that collects all the distinct answers and displays all the ways that each answer was clued. For example,

which looks pretty good, but then there is something like

Phase 6 (in progress)
Analyze the answer file produced in Phase 5 to find possible errors, e.g.
1. Missing periods.
2. Incorrect spacing of ellipsis.
3. Clues that include the answer (i.e. I typed the answer instead of the ___)
4. Answers in which most but not all clues include Abbr., etc.

I can correct errors such as mispellings in the file and then write another program to apply the corrections to the CrossFire files. I can also convert the puzzle dates into links that will display the PDF files for the puzzle.

Phase 7 (thinking about as I type)
Write a program that floats over the PDF file so that an answer is directly above it as I type.

Thanks so much again, Ralph, for this fascinating piece about the evolution of your litzing process!


You may have noticed some minor changes in the site's sidebar on the right.  Now that Litzstarter is over, I've removed the sponsor logos; I've also put in a link to XWord Info, since that's where you'll find the pre-Shortzian puzzles, and moved up the Subscribe button.  In addition, I've removed the PayPal Contribute button, since it was rarely used and took up important "real estate" in the sidebar.  (You can still contribute, though, by clicking on the Contribute tab above and following the instructions.)  All these changes have moved the Litzer of the Month gadget back into its former more prominent position.

Today's featured puzzle was constructed by Harold T. Bers, edited by Margaret Farrar, litzed by Brian Kulman, and originally published on February 21, 1959.  This prodigious puzzle contains just 64 words and, unlike the precious few other pre-Shortzian puzzles with low word count I've encountered, uses an eye-catching grid with no cheater squares.  On top of all this, the puzzle is filled much more cleanly than the average pre-Shortzian themeless with 72 or more words, making it a true tour de force!  Some of my favorite entries are LOVE SEAT, TERRA FIRMA, CREEPS UP, LANDMINE, and SEE STARS.  HEBETUDE (clued as "Dullness; lethargy") is an interesting-sounding entry as well, though I'd never heard of it before this puzzle.  Webster notes that hebetude and its adjectival form, hebetudinous, come from the late Latin hebetudo, which can ultimately be traced to the second-conjugation Latin verb hebēre, meaning "to be dull."  The puzzle does contain a few entries that Amy Reynaldo would designate as "roll-your-own," including PRECASTS ("Selects actors without a tryout."), RESTAMP ("Imprint again."), ENNEADIC ("Of a group of nine."), and ASAS ("Men named for a king of Judah."), as well as a few unusual terms, such as the partial-like ARLESIENNE ("Famous Van Gogh painting, with "L."), ADEEMS ("Revokes, as a legacy."), and RACEME ("Floral structure, as lily of the valley."), though none of these entries feels glaringly bad.  The clues are fairly standard on the whole, though the clue for SKEE ("Engage in winter sport: Var.") surprised me, since SKEE-Ball was definitely around back then and would have made for a better clue.  Then again, it seems that Maleska didn't introduce the Skee-Ball cluing approach until 1990—perhaps the pre-Shortzian editors felt Skee-Ball was too much like a brand name.  Nevertheless, this is an exceptionally strong, smooth pre-Shortzian themeless that would still be considered high-quality today, and I'm looking forward to seeing other ahead-of-their time Bers masterpieces as litzing continues further back into the '50s!  Here's the answer grid: 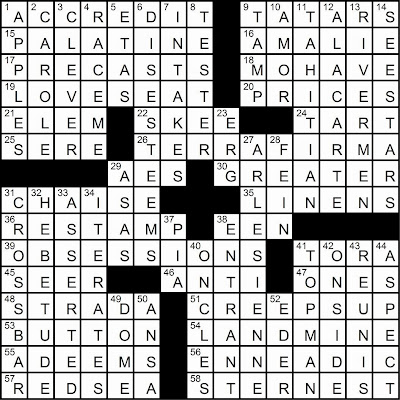 Posted by David Steinberg at 5:31 PM