I hope you all had a wonderful, puzzle-filled Thanksgiving!  This week the litzing machine has continued to chug along—I received more than 100 puzzles, and we're now almost at 13,800 on the litzing thermometer!  Just minutes after last week's blog post went live, Todd McClary sent in 7 puzzles.  Then late Friday night, Lynn Feigenbaum sent in her first batch of 7 puzzles—welcome, Lynn!  Sunday morning, Todd Gross sent in 10 proofread puzzles, followed by another 11 Tuesday morning.  Four minutes later, Ralph Bunker sent in 28 puzzles.  Wednesday morning, Ralph sent in 28 more puzzles (putting his total at more than 700!), which were followed by 31 proofread puzzles from Tracy Bennett that afternoon and 15 more litzed puzzles from Mark Diehl that night.  Mark sent in another 13 late Thursday night (putting his total at more than 4,100!), and this morning, Jeffrey Krasnick sent in 7 more.  Awesome job, everyone—we should definitely be over 13,800 by next Friday!

In other news this week, two very timely sales came to my attention:  the Puzzazz Thanksgiving Weekend Black Friday Puzzle Sale, which has great deals on puzzle e-books and apps and features two free Logic Crossword books by Roy Leban just for using the Puzzazz app any time between now and Monday; and PuzzleNation's Holiday Puzzly Gift Guide, which contains a list of many fun gift options for down time over the holidays not already taken up by litzing and proofreading!  Fluxx: The Board Game stood out to me the most.  Crossword constructor extraordinaire Mike Shenk introduced me to the card game Fluxx, whose rules get created differently each time the game is played, at the most recent National Puzzlers' League convention.  The game was loads of fun, and I'm sure the board game is a treat as well!  PuzzleNation also has a link to Dell's 100 Years of Crosswords, which of course includes puzzles by pre-Shortzian constructors!

Today's featured puzzle, "Thanksgiving Fare," was constructed and edited by Will Weng (who modestly used the byline W. W.), published on November 23, 1969, and litzed by Todd McClary.  In his Litzer of the Month interview from July, Todd cited this puzzle as the most memorable one he had litzed.  I wholeheartedly agree that this puzzle shines, not only because it's a quintessential Weng puzzle in terms of his style as a crossword constructor and editor but also because the theme is eccentric, fun, and even historically significant!  In this masterpiece, Weng dished up eight mostly symmetric, interlocking theme entries that take a dig at what was then considered a modern Thanksgiving meal:  PLASTIC TABLECLOTH (clued as "Holiday dining decor"), BISCUIT MIX ("Mom's baking standby"), PAPER NAPKIN ("Table decor"), FREEZE-DRIED COFFEE ("Repast topper"), INSTANT POTATOES ("Holiday menu item"), CANNED PEAS ("Vegetable for mom's table"), DEFROSTED TURKEY ("Crux of a holiday meal"), and BURNT BEANS ("Home-cooked item").  To me, the puzzle feels like a rueful homage to the old-fashioned Thanksgiving dinner when all the food items were fresh rather than artificial and pre-made.  It presents a bittersweet yet sardonic view on the evolution of an impatient, fast-paced modern society—a view that may have been reflective of his generation's take on the baby boomers as a whole.  (Just imagine how Weng might have felt about today's society!)  I am somewhat surprised that Weng didn't include an additional theme entry where SNOWMOBILE is, though the entry itself and its wacky clue ("Sleigh for today's grandma") could be considered thematic by a stretch and make up for the paucity of theme entries in that section of the grid.

The rest of the nonthematic fill has its ups and downs—I like the semi-thematic entry SALIVATE a lot, and entries like BOLOGNA, ROB ROY, ROMANTIC, SNIPING, and GIRAFFE give the fill a fresh and lively feel.  Also, although I've never heard of the word ERISTIC ("Controversial"), I feel it's an interesting word that's worthwhile knowing.  According to Webster, this rather unusual term can ultimately be traced back to the Greek eris, meaning "strife," which is also the name of the Greek goddess of discord.  The fill does, however, contain a sizable number of entries I'm not overwhelmingly fond of:  the partials THE DAY ("Officer of ___"), A DAY'S ("___ work," which also overlaps with THE DAY), and NOSE IN ("Stick one's ___"); the abbreviations RNWYS ("Airstrips: Abbr.") and OPR ("Girl with a headset: Abbr."); the hardcore crosswordese UINAL ("Mayan month"), ENTAD ("Inward: Anat."), and EDAR ("Biblical tower"); and the gallimaufry of prefixes and suffixes featuring ATOR ("Doer: Suffix"), ESCE ("Verb suffix"), AMIDO ("Of an acid"), IERS ("Comparative suffixes"), and OZON ("Oxygen prefix").  Also, SPOT-FREE ("Like a freshly-cleaned suit") feels a bit roll-your-own.  Many of the nonthematic clues, as in most Weng-constructed puzzles, have a lovely wry, clever twist to them.  My favorites are "Creators of jams" for AUTOS, "Social bore" for EGOIST, and the timely "1969 champs" for METS.  In all, despite a few setbacks in the nonthematic fill, this is a beautiful, meaningful construction and a harbinger of the brilliance and creativity that would flourish in the late Weng and early Maleska eras.  The answer grid (with highlighted theme entries) can be seen below: 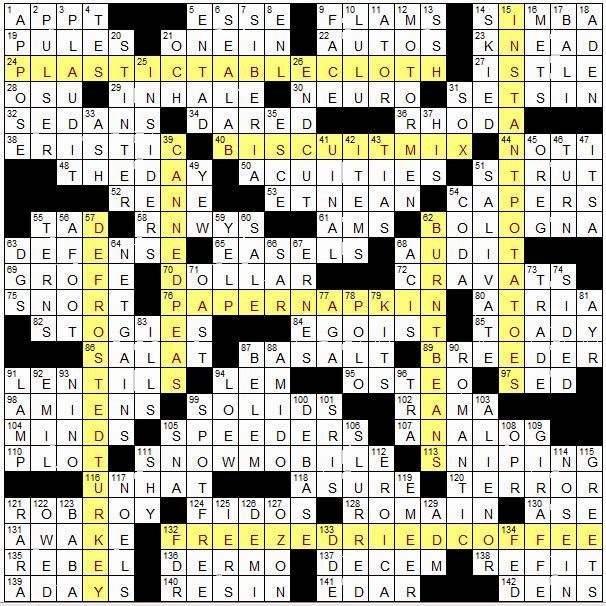 Following up on the nostalgic note of the featured puzzle, I thought I'd close off this post with some clues that reflect the changing times in the '60s:
Below is a picture of some miniskirts from the '60s:

Posted by David Steinberg at 1:00 PM