20th Anniversary of Will Shortz's Editorship (and of the Post–Pre-Shortzian Era!), Lynn Feigenbaum's 1993 Interview with Will Shortz, Eric Albert's "The World's Most Ornery Crossword," Project Update, Looming Litzing Challenges, and More Publicity

Yesterday marked the 20th anniversary of Will Shortz's editorship of the New York Times crossword—and, hence, of the post–pre-Shortzian era!  The past 20 years have truly been the golden age of Times crosswords—congratulations, Will!


And, serendipitously, yesterday I received an e-mail from our newest litzer, Lynn Feigenbaum, reportedly the first journalist to interview Will after he became puzzle editor of the Times.  Lynn's article, "Bill Clinton Of The Crossword Puzzle World," appeared in December 1993 in Editor & Publisher.  She writes:  "I had met him at the 1986 U.S. Open Crossword Championship (where I came in an inglorious 203rd out of 250 puzzlers . . . I've never gotten much better) and was appalled that the press didn't know what a revolutionary change was ahead.  I hoped writing the article for E&P, a newspaper trade mag, would spread the word.  I like to think it did. . . . "  You can read Lynn's fascinating piece here.

If you enjoyed Eric Albert's "Crosswords by Computer" article last week, you may want to try your hand at solving "The World's Most Ornery Crossword."  This computer-created puzzle by Eric has two independent sets of clues—"Hard" and "Easy"—so you can choose the challenge level you prefer.  The puzzle appeared in the same issue of Games and can be viewed and downloaded here.

On the litzing front this week, Howard Barkin sent in 7 puzzles (putting his total at more than 800 litzed puzzles!).  Saturday morning, Joe Cabrera sent in 6 more.  Then Sunday morning, Alex Vratsanos sent in 7 puzzles, which were followed by 7 more from Denny Baker that afternoon and 8 from Mark Diehl that night.  Monday morning, Alex sent in 7 more puzzles, which were followed by 7 more from Denny on Wednesday afternoon.  Friday morning, Todd Gross sent in 10 proofread puzzles.  Great job, everyone—by next week at this time, we should be over 13,700!

As we get into the final stretch of litzing, we're facing some new challenges.  Several litzers have already been sent some unusual packets—instead of containing a typical week of Monday through Sunday puzzles, some packets now may have just a few daily puzzles or a few Sunday puzzles with no dailies.  Soon we'll be entering the Sunday-only phase, which will begin (moving backwards in time) on September 10, 1950.  Packets from then on will consist of 4 to 5 Sunday puzzles.  Although this will mean that individual litzing totals will increase more slowly, the Sunday puzzles from this time period had so many fascinating historical and cultural references that they should still hold our interest!

Another looming litzing challenge is the number of missing puzzles, either because of newspaper strikes or because we simply couldn't find PDFs of certain puzzles.  Although these problematic puzzles comprise a relatively small percentage of the total—I recently counted 129 newspaper strike dates, for example—in the not too distant future I'll be soliciting help to track them down.

Finally, the Pre-Shortzian Puzzle Project received some more publicity this week in Deb Amlen's November 19 post on Wordplay—thanks so much, Deb!

Today's featured puzzle was constructed by George Laczko, edited by Margaret Farrar, published on March 13, 1967, and litzed by Mark Diehl.  This remarkable construction features six symmetrically interlocking theme entries that contain an article of clothing but that are either idiomatic and/or have nothing to do with the articles of clothing in and of themselves, such as SLIPS OUT and IN ANOTHER'S SHOES.  TIES INTO and SNOW CAPS are positioned particularly elegantly since they intersect two other theme entries apiece, a feat that would be exceptionally challenging even with the word lists and other resources available to 21st-century crossword constructors!  What really makes this puzzle extraordinary and way ahead of its time, however, is the inclusion of the reveal entry GARMENT DISTRICT (clued appropriately for The New York Times as "Part of New York City.").  I haven't seen very many daily puzzles from the '50s and '60s with themes as solid as this one, but I don't think I've seen any that go so far as to include a reveal entry!  The theme density did, however, necessitate a barrage of crosswordese and unusual entries in the nonthematic fill, which include ORLO ("Flat plinth."), PINNI ("Feather: Prefix"), ALME ("Egyptian dancing girl."), STYR ("Ukrainian river."), and DTHS ("Theological degrees.").  The weirdest-looking entry has to be WHEYEY ("Like thin milk."), a word that I've never seen before within or outside of crosswords!  Nevertheless, Mr. Laczko did a brilliant job with this puzzle, and I look forward to seeing more puzzles that are 20–30 years ahead of their time as litzing continues!  For now, here's the solution (with highlighted theme entries): 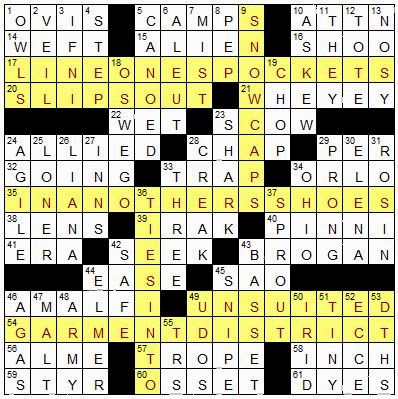 Posted by David Steinberg at 4:47 PM