In his down time from proofreading this week, Todd did some more research on pre-Shortzian constructors and discovered an interesting article about the extremely prolific A. J. Santora, who passed away in 2005.  Todd also discovered that James Barrick, who constructed numerous puzzles in the Weng and Maleska eras, often in collaboration with his wife, Phyllis, is still building crosswords!  I plan to try to contact him soon.  Finally, in his quest for more information about constructor Cyrus McCormick, Todd came across a humorous article (see below) about how crossword puzzles can benefit anesthetists.  Thanks for all this fascinating biographical research, Todd!

Today's featured puzzle, "Mixed Doubles," was constructed by Edward J. O'Brien; published January 13, 1974; edited by Will Weng; and recently litzed by Barry Haldiman.  This puzzle features eight pairs of theme entries that consist of a base phrase and its wacky spoonerism—this makes a total of 16 theme entries, which is truly amazing!  Even more impressive, the constructor placed each base phrase adjacent to its spoonerism in the grid—wow!  SECOND FIGHTS seems a bit iffy to me, but all the other base phrases feel strong and in-the-language; also, most of the spoonerisms are legitimately funny.  My favorites of the spoonerisms are WORD BOTCHER (clued meta-style as "Spooner, e.g."), SPATE OF AIDES ("Too many cooks") and SHUNS THE ROE ("Refuses a fish delicacy"), though at least two others made me chuckle!  The puzzle's high theme density did force a lot of iffy entries, which include the lengthy partials THE LAST ONE, AS FATE, PRIMES THE, LAP WAS, IT THIS, and TRIED A; the contrived phrases DEM DOSE ("Words after dese") and PERSIAN GOD ("Ahura-Mazda, for one"); and a smattering of not-so-great abbreviations like WTRS ("Restaurant workers: Abbr.") and variants/old-style entries like PAPAIAS SNEWS ("Winter falls, old style"), and TWEESE ("Instrument case, old style").  Nevertheless, the puzzle is largely free of flat-out obscurities, and entries like SWISS WATCH, EXTENUATED, and HIGH-HAT give the grid a nice bit of zip.  Overall, this is an ambitious and amusing pre-Shortzian puzzle that is extremely well-executed for its presoftware time!  The answer grid (with highlighted theme entries) can be seen below: 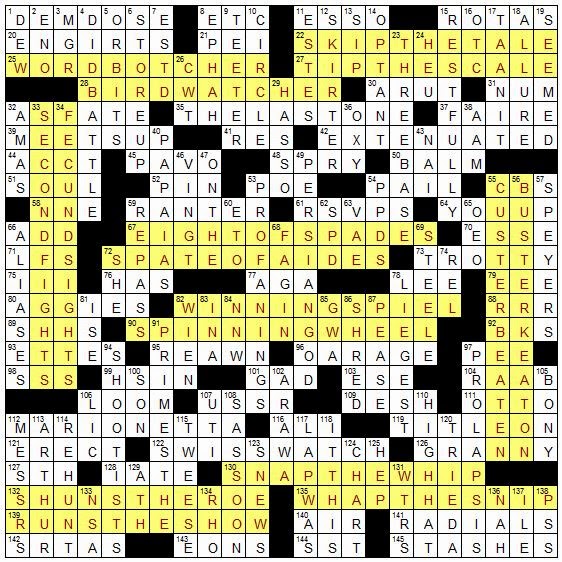 This past Thursday's New York Times puzzle, constructed by Anna Shechtman, featured the entry SHTUP, which caused quite a stir among crossword solvers!  In that vein, here are some Farrar- and Weng-era clues/entries that caused me to raise an eyebrow.  These clues/entries don't quite measure up to SHTUP, but they were certainly edgy for their time!

I think I'll forgo posting an image to go along with this group of clues.  I will say that I look forward to seeing what other surprising clues and entries show up in puzzles from the earlier part of Farrar's editorship!
Posted by David Steinberg at 7:40 PM