Today I'm delighted to present a fascinating interview with pre-Shortzian and Shortz-era constructor Charles M. Deber!  Charles is a research scientist in Toronto who has published 37 puzzles in The New York Times (35 of them Sundays!) and still builds his puzzles by hand.  To read his interview, click here or on the Pre-Shortzian Constructor Interviews tab above.

Shortly after last week's post came up, John sent in 8 puzzles.  Then Friday evening, I litzed a reassigned Sunday puzzle and put us at 15,900 on the litzing thermometer!  Saturday afternoon, new litzer George Barany sent in 1 puzzle.  Sunday afternoon, Todd Gross sent in 11 proofread puzzles, which were followed that evening by 3 litzed puzzles from Mike Buckley.  Monday morning, new litzer Jon Delfin sent 1 puzzle, which was followed by 2 more from Lynn Feigenbaum that afternoon.  Then Thursday morning, Tracy Bennett sent in another month of proofread puzzles, and late that night, Mark Diehl sent in 12 more litzed puzzles.  And this week Howard Barkin sent in two more months of proofread puzzles!  Thanks so much again, everybody—we're now at 15,919 on the litzing thermometer!

Great news:  Two more litzers decided to try proofreading this week and received their first packets:  Jeffrey Krasnick and Lynn Feigenbaum!  We have thousands of puzzles that need proofreading, so please let me know if you'd like to try the fun but diabolical proofreading self-test!

This week some new bios came in for the Meet the Litzers page—the following people now appear there:  Stephen Edward Anderson, George Barany, Tracy Bennett, Peter Broda, Ralph Bunker, Jeff Chen, Mark Diehl, Vic Fleming, Mangesh Ghogre, Todd Gross, Barry Haldiman, Angela Halsted, Garrett Hildebrand, Nancy Kavanaugh, Roy Leban, Matthew Mitchell (Braze), Adam Nicolle, Doug Peterson, me, Alex Vratsanos, Larry Wasser, and Brad Wilber.  Some litzers and proofreaders who don't have bios on the Meet the Litzers page have appeared on the Litzer of the Month page or in articles elsewhere on the site.  If you're a litzer or proofreader who hasn't yet sent in a bio and photo specifically for the Meet the Litzers page and would like to, please e-mail them to me.  (Also, if you'd like to update your current bio, please send me the new information, and I'll make the changes.)

This week I received an e-mail from litzer Susan O'Brien, who decided to research the missing pre-Shortzian puzzles by querying the New York Public Library to see whether it had the International edition of The New York Times.  Unfortunately, she received this response:

Even though this was a dead end, it was still very helpful, because it's one potential avenue we can cross off our list.  Thanks so much again for checking this out, Susan!  I'll be doing some more research myself this summer on the missing puzzles, and I'm hoping to have better news to report at a later date.

I also received an e-mail from litzer (and now proofreader!) Howard Barkin this week in which he shared the following very timely tip about Crossword Compiler 9:

A helpful note, grid mistakes can be corrected (In Crossword Compiler 9, at least) without further clue issues by enabling the option in Options->Preferences, Clue Editing tab, "Changing grid does not delete clue".

I don't know how many times I've found a grid mistake while proofreading, then corrected it (which deletes the affected clues), and then had to retype in the clues!  This is a great tip, Howard—thanks so much again!

The Pre-Shortzian Puzzle Project got some more publicity yesterday!  It was part of an article Kasey Dallman wrote about the Davidson Fellows for Amazing Kids! Magazine—to read it, click here and scroll down.

Today's featured puzzle, "Playing the Angles," which can be solved on XWord Info, was constructed by Charles M. Deber, published April 4, 1982, and litzed by Barry Haldiman (or one of his former team of litzers).  This brilliant, complex construction, which was Charles's New York Times debut, features ten in-the-language, symmetrically arranged theme entries that relate to directions, bending around corners, or overcrowding, such as UP AGAINST THE WALL, AROUND THE HORN, and MAKE ROOM FOR DADDY.  The catch is that each of these entries turns 90 degrees midway through the entry and continues in a different direction!  I've seen puzzles with entries that twist and turn in more recent years, but I believe this puzzle is the earliest example of such a clever gimmick.  What's even more amazing is that this puzzle was constructed entirely by hand—it must have been a real challenge to produce a grid that accommodated for both the vertical and horizontal components of each theme entry!

Deber not only produced such a grid but also was able to make the fill largely junk-free!  I don't love the partials MILE A, AT EIGHT, or TO HER, and UME, RIE, RESCH, and GLOSSIC seem a bit tough, but these entries are a small price to pay for the groundbreaking theme and fun entries like HOT SPOT, TOUCANS, and PULSATES.  I also find it funny that 1-Across starts with a C and 5-Across is DEBAR (sort of like C. Deber!)—I wonder if this was intentional!  And although I'm not familiar with BOUFFES (clued as "Comic operas"), it's a lot of fun to say and looks really cool in the grid!  Merriam-Webster notes that BOUFFE is short for opéra bouffe, which means "a satirical comic opera" and ultimately derives from the Italian opera buffa.  The etymology of the word TRULL ("Strumpet"), an old-fashioned term for a woman of loose morals, is also fascinating—it ultimately derives from the Old French troller, which meant "to hunt for game without a scent or path."  At some point in the 1500s, someone must have interpreted the aimless hunter as the woman with loose morals and the game as the men she interacted with!  In all, this is a thematically exceptional pre-Shortzian puzzle that added several new words to my vocabulary.  The puzzle can be viewed and analyzed on XWord Info, where Jim Horne made this unusual gimmick look awesome!  The answer grid (with highlighted theme entries) can also be seen below, although the grid is numbered slightly differently in the PDF (and XWord Info) versions. 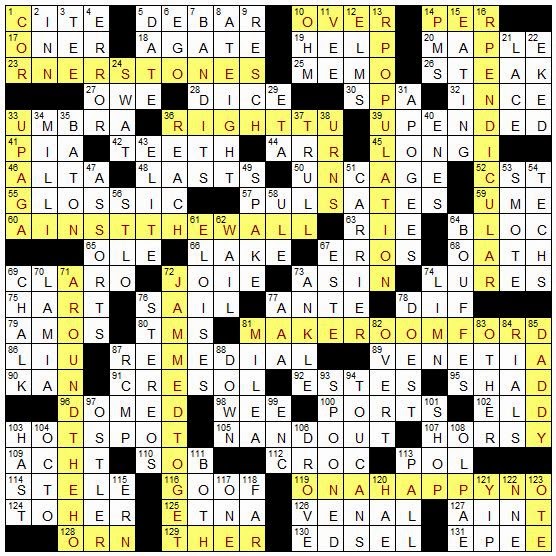 Posted by David Steinberg at 5:17 PM