This week I'm delighted to present another pre-Shortzian constructor interview—with the ever-prolific Stephanie Spadaccini!  Stephanie published 8 puzzles in The New York Times under Will Weng and Eugene T. Maleska and has gone on to publish 36 more during Will Shortz's editorship.  To read the interview, click here or on the Pre-Shortzian Constructor Interviews tab above, then be sure to check out her featured puzzle below!

A couple of weeks ago I wrote about Susan O'Brien's research at the New York Public Library.  This week I received an update from Susan, who wrote:

Last week, I received a second response to my inquiry to the New York Public Library about alternatives to the missing Late Editions of the NY Times.

As you can see, there was a gap in the dates available, but I printed out the 12/6/53 (Joseph M. Cunningham), 12/7/53 (Marion Moeser), and 12/8/53 (Abraham Glicksman) puzzles and answers.  The quality of the readers and lenses is awful so the printouts are barely legible.

In a later e-mail, Susan added:

I printed out the New York Herald Tribune's 12/9/53 puzzle from microfilm before I realized it wasn't a date we were missing.  I'm attaching the scan.  Does it jive with what you have from the Times?  That would be a stroke of luck.

I was very excited about this possibility and immediately checked my records.  Unfortunately, the 12/9/53 scan Susan had sent didn't match any Times puzzles in my spreadsheet, nor did the printouts.

The U.S. New York Herald Tribune had a daily crossword for a while, so I'm guessing that Susan's scan and printouts were copies of these puzzles.  I asked her to send me a few more puzzles from this source from a couple of different years so I could be sure that these puzzles weren't from the Times.

Susan noted later, though:  "The more I look at these puzzles the less I think they had anything to do with the Times.  They're just too easy."

Today's featured puzzle, which can be solved on XWord Info, was constructed by Stephanie Spadaccini; published February 24, 1978; edited by Eugene T. Maleska; and litzed by Mark Diehl.  This amusing puzzle features a candid question (DID YOU TAKE A BATH?) and a symmetrical, witty response (WHY, IS ONE MISSING?).  I agree with Stephanie that the puzzle feels a little thin in terms of the quantity of theme entries, but the witticism nevertheless brought a smile to my face, and the low theme density allowed her to incorporate some snazzy mid-length entries!  The highlights of the nonthematic fill include ORGANDY, LAMBASTE, BANYAN, COGENT, GASEOUS, and POSERS.  I was surprised to discover that ORGANDY (clued as "Prom-dress material" in Stephanie's puzzle), which appeared in at least four other pre-Shortzian puzzles and a Cox/Rathvon acrostic, has never been used in a Shortz-era New York Times crossword.  Maybe I'll work this entry into a crisp themeless . . . if it isn't sheer agony to get a corner with ORGANDY to fill cleanly!  Anyway, the rest of the nonthematic fill and the clues feel pretty standard for a pre-Shortzian puzzle.  There are a smattering of partials and a few pieces of hardcore crosswordese (ATLI, OTEA, etc.), but the puzzle still seems nice and solid on the whole.  And I find it fascinating that the contemporary clue for MARS ("Recent NASA target") still applies today.  Overall, I enjoyed seeing this Spadaccini opus, and I look forward to continuing to solve her more recent constructions!  The puzzle can be viewed and analyzed on XWord Info, though as always, I've included the answer grid (with highlighted theme entries) below: 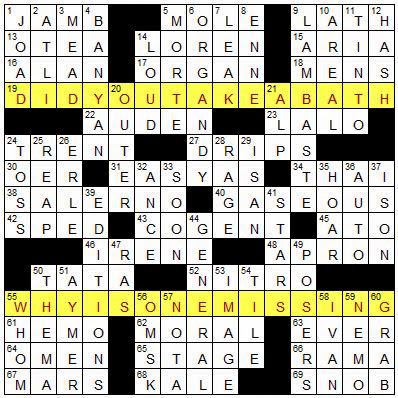 Posted by David Steinberg at 7:47 PM