On Monday I'll be giving a crossword talk about the project and other cruciverbalist matters at the Newport Beach Public Library—if any of you are in the Orange County area, I hope to see you there!  For more details, click here.

This past week I put out a call to litzers with puzzles—my hope is that we'll have all the litzed puzzles back by the end of August.  Todd McClary sent in 4 litzed puzzles Saturday morning, putting the litzing thermometer total at 15,965.  Then early Tuesday morning, Denny Baker sent 31 proofread puzzles, which were followed by 9 from Todd Gross on Wednesday morning.  And this week Howard Barkin sent in 30 proofread puzzles.  Now that summer vacations are getting under way, the puzzles may come in a bit more slowly, but we're still making great progress!  Thanks so much again, everyone!

Last week I also wrote about the pre-Shortzian theme challenge Jim Horne had suggested.  I think this one stumped a lot of solvers—Tyler Hinman was the first of only 7 people who wrote in with the correct solution!  Congratulations to the following ace puzzlers, listed in the order in which I received their responses:

For everyone who's still wondering about this poser, here's an explanation: 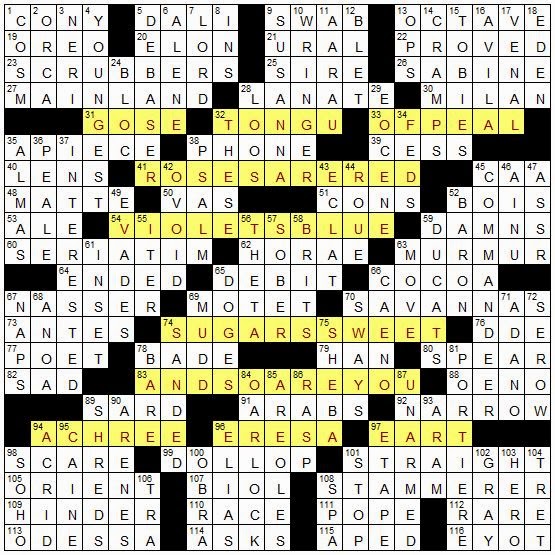 Each of the "theme words" in this Mother's Day puzzle can follow the word MOTHER if a letter is added:

The six missing letters spell MOTHER.  The title refers to the song lyric "Put them altogether and they spell mother."  I found a link to the song on YouTube.

Thanks again, Jim, for this great idea, and I'll definitely be adding an explanation in the PS Notes section of this puzzle's XWord Info page soon so future generations of solvers aren't at sea!

I took this opportunity to try looking up Irene Smullyan on Ancestry and elsewhere on the Internet.  I found several things, but it started with a quote from her in the NY Times Sunday Crossword Tribute to ETM.  Here's the quote:

I am delighted to pay my tribute to Dr. Maleska, whom I admired tremendously.  Although our relationship always stayed professional, he managed to infuse it with a personal quality that made me feel as if I knew him as a friend.  When I was a beginner, his generous advice and encouragement enabled me to become a published puzzlemaker.

He was unique in his perfect integrity and uncomprising [sic] adherence to the highest standards.  His literacy, his vast knowledge, and his obvious love of language made me, in creating my puzzles, always strive for perfection, and his praise (rare enough) was an absolute triumph.

So that was my starting point.  I found several scattered bits of information, it took some time (and luck) to piece it all together.  So here's what I can tell you.

She was born Irene Lapouse on 24 Jan 1917 to Russian immigrant parents near Boston.  She had an older sister Rema who was born around 1912, so Rema emigrated Russia with her parents Alexander and Sophie in 1914.  So right about 100 years ago . . . and right about when WW I started.

Irene majored in biology at Harvard and later went on to do cancer research.  I found a few research papers that mentioned her.  The first one I'm linking to says she gave "technical assistance," so I'm guessing she was working at Sloan Kettering at the time (1980).

The second one has her as a co-author . . . but all I've got is the title.  If I join Research Gate I might be able to get the full article.  That paper was from 1973.

In her personal life, she married Robert Sloan Smullyan in Maine in March of 1940.  Robert was an artist of some renown.  Enough to have his own web site.

Irene passed away 22 Apr 2007 in Duxbury.  Alas, I haven't found an obituary for her yet.  But I found something else that might just be better.  A book she wrote.  A book of poetry. 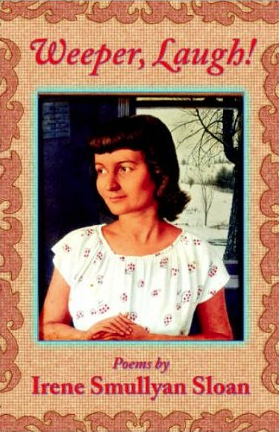 The book came out in 2005, so not long before she passed away.  In the introduction (you, as I did, can read from it by clicking on the book cover image [on Amazon.com]), she thanks Eugene Maleska, so no doubt this is the right person.

Finally, a question I was hoping to answer when I started this search.  Was she related to the puzzle legend Raymond Smullyan?  I knew him from a book he did called The Chess Mysteries of Sherlock Holmes, which was a book of retrograde analysis chess problems.  Of course, I know now they're not blood relatives, but Robert's obit mentions a Raymond Smullyan.  Raymond was born in 1919 in Far Rockaway, NY; Robert was born in NYC in 1915.  So they might be related.  But I can't tie the Raymond I know to Elka Park, so at this point I'm skeptical.

Thanks so much for this fascinating update, Todd!  It is indeed very interesting that Raymond Smullyan was a puzzler too.
Posted by David Steinberg at 7:18 AM