Pre-Shortzian Theme Challenge . . . and a Look at the Changing Times

It's been another busy week on the proofreading front!  Friday night, Mark Diehl sent in 11 proofread puzzles, then another 11 Sunday morning and another 28 that night!  Monday night, he sent 23 more puzzles, which were followed by 10 from Todd Gross Tuesday morning.  Tuesday afternoon, Barry Haldiman solved and sent 3 litzed puzzles for which we didn't have solutions.  Early Thursday, Mike Buckley sent in 7 more litzed puzzles that had been reassigned, and then that afternoon, Denny Baker sent in 4 more litzed puzzles, putting us at 15,961 on the litzing thermometer.  Thursday night, Todd sent in 11 more proofread puzzles.  We're making terrific progress—thanks so much, everyone!

In other news, numerous people have written to Jim Horne and Jeff Chen of XWord Info about Irene Smullyan's "Put Them All Together" crossword, which was published late in the Maleska era on May 9, 1993.  This puzzle has a bizarre theme that has stumped many people (including me and Jeff), but Jim was able to figure it out, and he suggested that I challenge readers of this blog to provide a complete explanation of the theme!  If you're able to figure out this puzzle's enigmatic theme and haven't previously seen or solved this puzzle, send me an e-mail.  In next week's blog post, I'll list the names of everyone who submitted a correct solution!

Today's featured puzzle, "Then and Now," was constructed by Ted Dombras; published May 19, 1963; edited by Margaret Farrar; and litzed by Mark Diehl.  This fascinating construction reflects on the changing times via numerous clues containing the words "then" (referring to the '20s) or "now"/"today" (the '60s)—I counted a mind-blowing 37 theme entries, including four stacked "pairs" that provide a direct comparison between these two decades!  Below, I've listed the fascinating "then" and "now" clues/entries in the order in which they appear in the puzzle, as well as the direct comparisons and other decade-specific entries that don't necessarily contain "then" or "now"/"today" in their clues:

The constructor did an amazing job of squeezing in so many theme entries, but what's even more impressive is that he produced a clean nonthematic fill around them!  I particularly like TORQUE, SNIFFLE, MOTORCARS, YES SIR, and RAZZED, and I appreciate how this puzzle is relatively free of obscurities, partials, and contrived words/phrases, although there are a few ugly abbreviations, such as ULTO ("Relative of inst.") and SMC ("Printer's abbreviation.").  The strangest entries in the grid are FIORITO ("Flowery: It.") and CONATUS ("Striving."), but FIORITO has a nice sound to it, and I was immediately able to recognize that CONATUS came from the Latin conor, meaning "I try."  All in all, this is an excellent pre-Shortzian puzzle from the solving, construction, and historical perspectives!  The answer grid (without highlighted theme entries, thank you very much!) can be seen below: 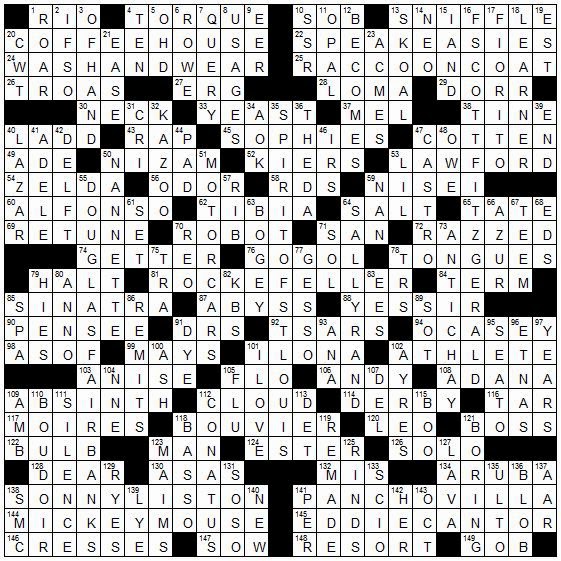 Posted by David Steinberg at 1:59 PM