Project's Second Anniversary: At 16,000, Jim Modney's Correspondence with Eugene T. Maleska, and an Interview with Jim Modney Himself

Two years ago I started the Pre-Shortzian Puzzle Project with the goal of litzing and proofreading all the New York Times crossword puzzles published before Will Shortz became editor.  Little did I imagine that 24 months later, more than 60 people in the crossword community would have stepped forward to help with this effort and that together we would have litzed 16,000 of the 16,225 puzzles, with all remaining, locatable puzzles assigned to litzers—and, to top it all off, that we would have proofread nearly 20 years of puzzles!  The response from the crossword community has been incredible, and I'm so grateful to everyone who has helped to make this happen!  The recognition from outside the crossword community, from the Davidson Institute for Talent Development and Quill and Scroll, has also been very gratifying, showing that this momentous undertaking has value not just to cruciverbalists but to the world at large.  Thanks so much again, everyone, on the second anniversary of this project—maybe by next year at this time, we'll have made it through most, if not all, of the proofreading and have everything up on XWord Info!  And many, many thanks to XWord Info creator Jim Horne for continuing to host the pre-Shortzian puzzles so that everyone can enjoy and learn from them!

I'm especially honored and pleased on this anniversary to be publishing what may well be the most revealing record in existence of Eugene T. Maleska as an editor.  Thanks to pre-Shortzian and now Shortz-era constructor Jim Modney, the entire correspondence between Jim and Gene is now available, and Jim has generously allowed me to post it on Scribd.  This is truly an invaluable document, showing a little-recognized side to Maleska as both an editor and a person.  I encourage everyone to read it, even if your interactions with Maleska were less than ideal.  Click here for more.

I'm also thrilled to present an interview with Jim Modney himself.  Jim's story is fascinating—he took a 30-year break from constructing, and it's great to be able to solve his Scrabbly constructions with clever themes once again!  To read Jim's interview, click here or on the Pre-Shortzian Constructor Interviews tab above.

Thanks so much again, Jim, for saving all your correspondence and making it and your interview available to the crossword world on the second anniversary of the Pre-Shortzian Puzzle Project!

Although Jim Modney did an excellent job of describing all his puzzles, I'm still going to highlight one this week.  Today's featured Modney opus was published Saturday, September 12, 1981; edited by Eugene T. Maleska; and litzed by Mark Diehl.  It's a splendid pangrammatic 70-worder that even contains a minitheme!  The minitheme, which consists of QUARTERFINALIST and HALFHEARTEDNESS, is fractions contained in larger (15-letter, in this case) phrases.  Jim added multiple levels of consistency to his minitheme by placing the two fractions at the fronts of his theme entries and by ensuring that both theme entries are single words.  As for the nonthematic fill, Jim squeezed in tons of fresh, Scrabbly entries without having to use a large number of subpar ones, which is very impressive given that the grid is so wide open!  My favorite entries include EQUINOX, GUANACO (which gets far less attention than CAMEL or LLAMA), EXOTICISM, EJECTABLE, BENZENE, and JOKER!  I don't love GIRTS (clued as "Measures the circumference"), LATESTS ("Avant-garde styles"), or SYCES ("Indian attendants"), but all three of these entries were used in other pre-Shortzian puzzles (in the case of SYCES, in the singular).  The real trade-off with the fill is that the grid has a handful of cheater squares, but I think Jim made a good call in going for the cleaner fill rather than for the less chunky grid.  All in all, this is a fantastic pre-Shortzian puzzle with a strong minitheme and minimal junk in the fill!  The puzzle can be viewed or solved on XWord Info; also, as usual, the answer grid (with highlighted theme entries) can be seen below: 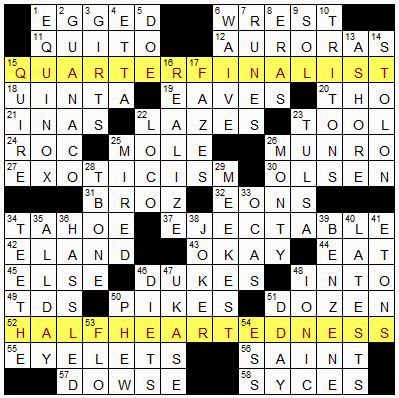