Interview with Ed Julius, 1973 Puzzles Up, Call for Proofreaders, Proofed vs. Unproofed Puzzles, and a Surprising Entry

This week I'm delighted to present an interview with pre-Shortzian constructor Ed Julius!  Ed is a professor of business administration at California Lutheran University whose specialty is financial accounting and . . . crossword puzzles!  To read more about Ed, click here or on the Pre-Shortzian Constructor Interviews tab above—and be sure to check out this week's featured puzzle below, which he published in 1974, as well as the interview's links to downloadable PDFs of two of his favorite puzzles!

Great news:  The proofread puzzles from 1973 are now up on XWord Info, thanks to Jim Horne—we've finished 21 years!  And after the few remaining weeks of puzzles come in that are still out with litzers, we'll be done converting all the 52 years of pre-Shortzian puzzles we have!

It's been a very busy week on the proofreading front:  Early Saturday morning, Todd Gross sent in 9 puzzles, which were followed by 9 from Mark Diehl on Tuesday night.  Mark sent 23 more Wednesday night, and then Thursday morning Todd sent in 10 more.  A few hours later, Denny Baker sent 30 more, and then 31 more came in from Mark that evening, followed by another 29 from Mark later that night!  Thanks so much, everyone—awesome job!

We still need proofreaders—the more people we have proofing, the sooner we'll be able to get all the litzed puzzles up on XWord Info!  If you think you'd be a good proofreader and own Crossword Compiler, please let me know and I'll send you the proofreading self-test.  As with litzing, any and all amounts of help with this effort will be most appreciated!  Also, one of our proofreaders thought of a way to hold a proofreading contest (with prizes, of course!) that wouldn't directly involve speed, so stay tuned. . . .

In other news, litzer Martin Ashwood-Smith restored my faith in pre-Shortzian fill standards!  Last week's featured puzzle contained the entry BTS (clued as "British titles: Abbr."), which I had erroneously assumed stood for British titles.  Martin pointed out that BTS is actually the abbreviation for baronets.  I wouldn't want to add BTS to my word list now, but at least it's a legitimate piece of fill.  Martin and I have also been having an interesting correspondence about the history of stacks in crosswords, which I may write more about later.  To make a long story short, triple stacks of 15-, 17-, and even 19-letter entries have been around for quite some time, and even quad stacks came into existence before Joe Krozel introduced them to the Times in 2009.  Luckily for historical purposes, the history of quint stacks is quite straightforward!

Today's featured puzzle, which can be solved on XWord Info, was constructed by Ed Julius; published January 15, 1974; (pun mode on) ed-it-ed (pun mode off) by Will Weng; and litzed by Jeffrey Krasnick.  This nifty themeless, which was Ed's Times debut, features six interlocking 15-letter entries in a 78-word grid, a themeless structure similar to that used in many Manny Miller puzzles from the Farrar era.  The 15-letter entries have a nice dash of sparkle—I especially like BEGIN THE BEGUINE (clued as "Cole Porter tune"), THE HASTY PUDDING ("Harvard club"), and REGRESSION LINES ("Math ratio entries")!  I wasn't hugely fond of regression lines last year, since that was the chapter my AP Statistics course covered while I was out of town, but I eventually figured out how they worked by the time we got around to the slope of the regression line t-test.  Just imagine trying to squeeze SLOPE OF THE REGRESSION LINE T-TEST into a crossword!  Anyway, as for the rest of the fill, Ed expertly balanced his grid-spanners with clean 3s, 4s, and 5s.  The only entries that really gave me pause were DREE ("Suffer, in Scotland") and TENE ("Filament: Suffix), which makes the puzzle quite well built for its time.  The clues are mostly straight definitions, but I appreciate that Ed wove in a few more unique ones, such as "Durocher's nickname" for LIP and the misleading "Famous doctor" for SEUSS.  My favorite clue, however, is the self-referential "Edward of TV" for ASNER!  In all, this is a solid pre-Shortzian puzzle with a pleasing amount of oomph.  The puzzle can be viewed on XWord Info; for those of you whose fingers have had too much of a workout from litzing or proofreading, I've pasted the solution grid below so you don't have to click on anything! 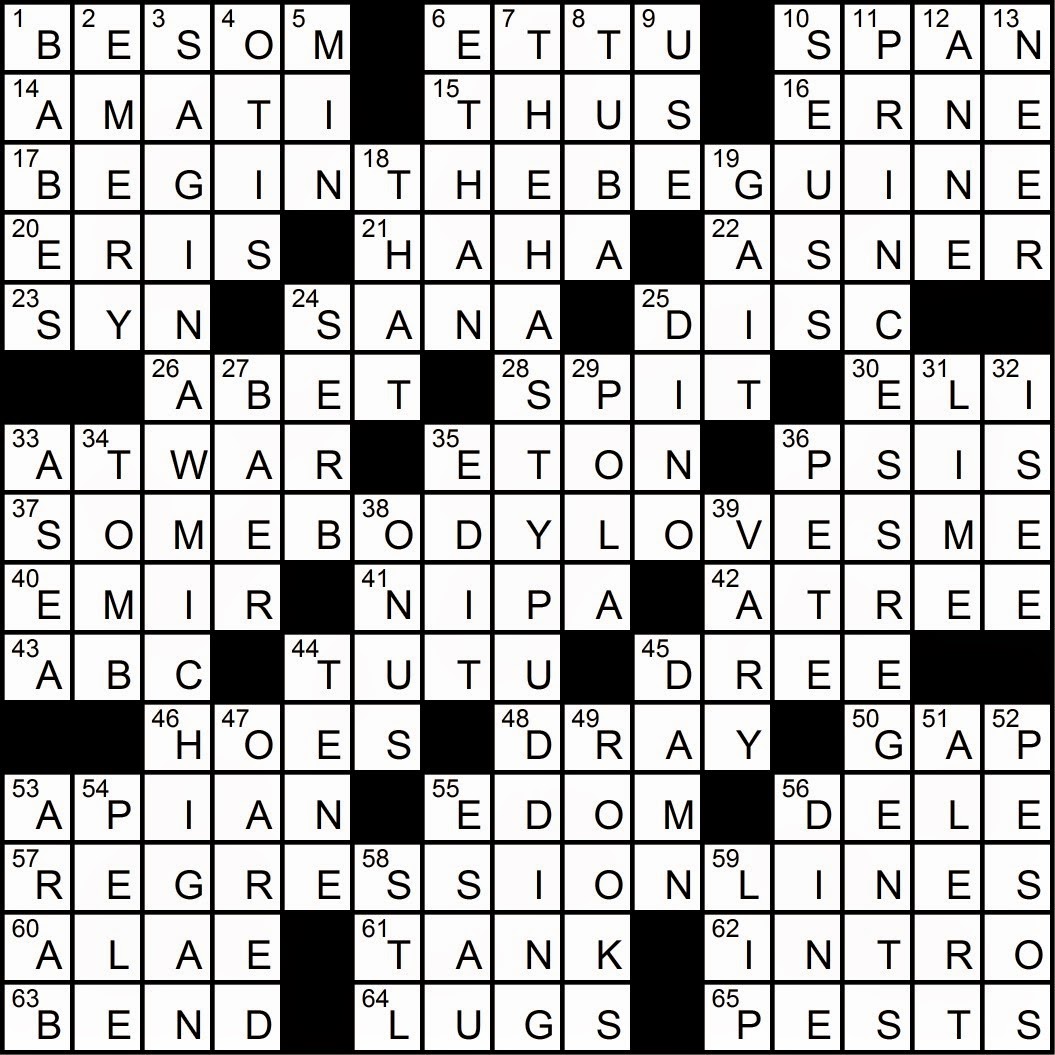 Entry of the Week

Posted by David Steinberg at 5:17 PM